Thankfully wherever and whenever there has been a monopolistic stranglehold on the truth, there have been handfuls of brave warriors and resisters who have defied the powers that be and sought to get truth out into the public arena any way they could.

The early Christians for example often faced horrific persecution from the State when they dared to share truth about the one true Lord, Jesus Christ. That put them in direct confrontation with the Roman power structure that declared Caesar alone is Lord.

But it is not just the secular state that must be resisted on occasion. At times even the religious powers in authority have had to be defied when they went against God and his values. For example, when the ruling powers sought to keep the Bible out of the hands of the common people, or prevent the cleaning up of ecclesiastical corruption, there were brave activists who defied this, seeking to reform the church and make the Bible freely available. 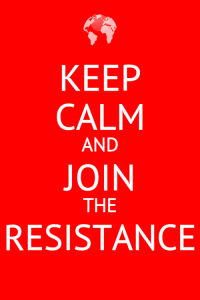 Think of some early Christian reformers such as John Hus, John Wycliffe and William Tyndale. All sought to see much-needed reform in the church, and all sought to emphasise the importance of God’s word. Many of them paid the ultimate price for daring to do this.

And I am not picking on Catholics here. Plenty of Protestant power structures also opposed necessary reform. Think of the established Anglican Church and how it responded to the Puritans and others. Sometimes separation became necessary when the official church would not budge. The Wesleys and Whitefield for example considered themselves to be good Anglicans, but eventually Methodism was birthed.

In more recent times we had many who resisted the totalist state. Christians like the Dutchman Brother Andrew defied the communists as he sought to smuggle Bibles into Soviet bloc countries. Andrew van der Bijl, who is still alive, recounted his heroic efforts in various books, including the 1964 volume, God’s Smuggler.

Hitler and the Nazis were also opposed by some brave souls. Think of Hans and Sophie Scholl and their short-lived White Rose movement. Their resistance to Hitler took the form of producing pamphlets and circulating them in German universities. They too became martyrs. Read more about these champions here: billmuehlenberg.com/2018/07/30/notable-christians-sophie-and-hans-scholl/

Indeed, I have written about them more than once, since they serve as such an inspiring example of those committed to being part of a much-needed resistance movement. As I wrote elsewhere:

As the West grows increasingly darker, more ungodly, indeed more anti-God, more immoral, more culturally bankrupt, and more hostile to what so many of us believe in and value, we need to ask the question again: how are we to respond? . . . But as things grow worse and worse, with few positive options on the horizon, we may have to increasingly speak of bands of resistance fighters defying the state and agitating for freedom, morality, and humanity. And this would not be the first time such a need arose.
billmuehlenberg.com/2016/02/23/we-need-another-resistance-movement-remembering-the-scholls/

In a sense nothing has changed. There is always a need for a resistance movement, for activists who will not bend the knee to the reigning powers, for those willing to sing from a different song sheet. While the West for a number of centuries did mainly all make use of the same song sheet, that is certainly no longer the case.

Our institutions of power and influence have long ago been taken over by those hostile to the values of so many of us – values stemming from the Judeo-Christian worldview, which made the West possible in the first place. The secular left now rules the roost.

It is always the hallmark of totalitarian societies to fully control the media, education and all forms of communication. In the West we continue to see ominous moves in this direction. Not only does big government more and more seek to control what is said and even what is thought (consider hate-speech crimes and the like), but big business is also getting into the act with near-monopolistic power, as we see with Twitter, Google, YouTube, Facebook, and so on.

Given the near-stranglehold they have on the mainstream media and elsewhere in the West, the rise of alternative media continues to be a necessity. Whether it is an entire news network, such as Fox News, or alternative social media platforms to the uber-left Facebook and the like, those concerned about freedom of speech and freedom of thought are leaving the various MSM outlets in droves.

So things like alternate media sites, home-schooling, independent websites and bloggers are just part of the fightback. As long as even snippets of truth can be heard and penetrate the statist version of events, freedom can continue and the totalist state cannot fully dominate. But it is a perennial challenge.

We all know just how bad things are with social media sites like Facebook. These media giants have near-monopoly powers. Indeed, I am still languishing in the Facebook gulag, for a crime I did not even commit. And every day I hear of more conservatives and Christians who are being banned and/or having their pages deleted, not just by FB, but by so many of the other major players.

Yes, we have much smaller outlets like MeWe which I and various friends are now on. And so far it has allowed me total liberty to post as I see fit. But until many more folks migrate there and to other places like it, the Big Boys in town will continue with their vicelike grip.

I mentioned above how the secular left now enjoys cultural, ideological and political hegemony. And they did not get that way by accident. As I have documented often, the cultural Marxists have had a plan, and they have been hard at work at implementing their plan. And they have been wildly successful. See here for example: billmuehlenberg.com/2017/05/30/understanding-cultural-marxism/

One of the key ways the resistance fighters will be able to survive and launch a viable counter-offensive is if we take a few leaves out of the other side’s strategy books. We need to think long term and we need to see the big picture. I have spoken about that elsewhere as well: billmuehlenberg.com/2016/04/18/big-picture-long-term/

Often when I speak in public somewhere, in the Q&A session I am asked about how I foresee the future, and how we can turn things around. I always say that the short term in the West is looking horrifically grim, and we need to focus on the long term.

The trouble is, far too few believers are even thinking like this. If they do get involved in the culture wars – and most of them never do sadly – they think that signing a petition or shooting off a form letter is the extent of their involvement. They have done their bit and can relax for a year or two, and then maybe sign another petition.

Um, that is not how we are going to win. That is how we will keep on losing. The other side is fully committed and is in it for the long haul. Yet so many conservatives and Christians are simply sitting all this out. They may not like what they see, but they have no notion or desire of rolling up their sleeves and getting involved.

Until that changes – and changes substantially – the other side will keep winning, and we will keep losing by default. We desperately need activists, warriors and resistance fighters today. Sure, all this must be undergirded by sustained and powerful prayer and spiritual warfare.

But we must be willing to get our hands dirty and to really get involved. And as I keep saying, getting truth out into the public arena when truth is so scarce and so despised is a key component of our counter-offensive. As Solzhenitsyn so powerfully put it, “One word of truth shall outweigh the whole world.”

But we need people with courage and determination who WILL speak truth. Let me close with a few more quotes which will hopefully inspire you to begin to care, begin to get involved, and begin to enter into the monumental struggle to proclaim truth in a dying culture:

“Marxists get up early to further their cause. We must get up even earlier to defend our freedom.” Margaret Thatcher

“When principles that run against your deepest convictions begin to win the day, then battle is your calling, and peace has become sin; you must, at the price of dearest peace, lay your convictions bare before friend and enemy, with all the fire of your faith.” Abraham Kuyper

“God has called us to shine, just as much as Daniel was sent into Babylon to shine. Let no one say that he cannot shine because he has not so much influence as some others may have. What God wants you to do is to use the influence you have. Daniel probably did not have much influence down in Babylon at first, but God soon gave him more because he was faithful and used what he had.” Dwight L. Moody

“History will record with the greatest astonishment that those who had the most to lose did the least to prevent its happening.” Ronald Reagan

“Our culture will collapse as surely as that of ancient Israel when they turned away from the protective and life-sustaining principles of God. But collapse is far from inevitable because the church has in its purpose, worldview, ethos, and mission everything needed to turn culture around.” Charles Colson

I look forward to seeing you in the trenches.

3 Replies to “Resistance, Activism, and the Alternative Media”