Today a decidedly religious experience will be experienced by millions of people. There is a shrine in Melbourne Australia dedicated to this event, and it will be cram-packed – perhaps with 100,000 people. And many millions will watch this religious spectacle on television as well.

The emotional devotion to this event will be off the charts. People who were mild-mannered, reserved and quiet all year will today scream themselves hoarse for their beloved gods in wild displays of passion and exuberance. And depending on the results of this sporting event, when it is over many will be in heavenly bliss while many others will be in the depths of despair.

I refer of course to the Grand Final of the Australian Football League. While footy is a god for many Australians all year long, it all reaches fever-pitch heights on the last Saturday in September. It does not matter which two teams will be there – there will be millions of devotees absolutely in a state of worship for the next few hours. 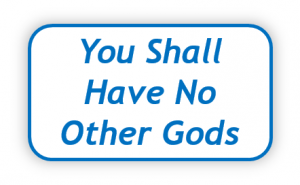 And make no mistake that this IS a religious festival for so many. In the state where the big game is held, the day before has even been declared to be a public holiday. That is taking things pretty seriously. But at this point I better make an obvious point.

But of course it can well become a false god for many. Some folks simply worship the game or their team, and their entire life centres on the footy. It has taken them over, and has become the main thing they live and die for. It has become an idol to them.

Of course we all have idols. Simply put, an idol is anything we are more devoted to than God. Plenty of obvious idols come to mind: making money, career, power, sex, and so on. But other things can also become idols, such as becoming a hard-core fan (fanatic) about sport.

Even neutral or very good things can also become idols. One can put one’s family ahead of God. Now, family is very important, and God’s Word puts a lot of emphasis on the importance of family. But Jesus himself could say some radical things about family, such as the need to love God more than one’s own family (see Matthew 10:37, eg).

It is not that we should not love our families – we should. But we should love God even more by comparison. He is to come first in everything. So our propensity to make idols comes in many different forms. Sport is just one of them. And it is just too easy to love our sport more than we love God.

Sure, most folks would deny that they do, but there are some easy tests here. If we watch sport, think about sport, shout about sport, and devote ourselves to sport MORE than we do God, than we likely have turned sport into an idol. If you get far more excited looking forward to going to a game on the weekend than going to church on Sunday, you may have an idol in your life.

And in Scripture there is only one solution to the problem of idolatry: the idol must be destroyed. Simply consider some Old Testament passages on this. Ungodly kings were those who allowed idols to remain in the land. Here is just one of many verses on this:

2 Kings 21:11-12 Manasseh king of Judah has committed these detestable sins. He has done more evil than the Amorites who preceded him and has led Judah into sin with his idols. Therefore this is what the Lord, the God of Israel, says: I am going to bring such disaster on Jerusalem and Judah that the ears of everyone who hears of it will tingle.

But the godly kings had the idols removed or destroyed. Here are two verses on this:

2 Kings 11:17-18 Jehoiada then made a covenant between the LORD and the king and people that they would be the LORD’s people. He also made a covenant between the king and the people. All the people of the land went to the temple of Baal and tore it down. They smashed the altars and idols to pieces and killed Mattan the priest of Baal in front of the altars.

2 Chronicles 14:2-5 And Asa did what was good and right in the eyes of the Lord his God. He took away the foreign altars and the high places and broke down the pillars and cut down the Asherim and commanded Judah to seek the Lord, the God of their fathers, and to keep the law and the commandment. He also took out of all the cities of Judah the high places and the incense altars. And the kingdom had rest under him.

So to get really practical here, we have to ask what has become an idol in our hearts today. For some, it most certainly is sport. If you are a Christian, you need to deal with this – or any other idolatry. And it can be done. Just the other day I saw a post from a friend who was very much into the footy for quite a long time. But he has managed to break free. He recently said this on the social media

It’s weird – and also quite cool – to be absolutely devoid of interest in the Grand Final after paying virtually no attention to the AFL for the entire year. After 40 years of watching and almost 3 decades of working on it, I miss it less and less. Found myself today thinking, “oh yeah, that’s on Saturday.”

I guess maybe it’s a little easier for me since it’s not the first time in my life I have cut something major off permanently in a second. I think I’m a loyal kind of person, but there are lines that cannot be crossed, and I can point to a handful of things where I know something has gone profoundly too far to be rescued. When the AFL put up that YES sign last year, it was instantly over. I refuse to support a political operation that just happens to flavour their politics with football. Nope, nope and noper.

This is a good testimony. While much of his concern was about the incessant and disgusting politicisiation going on in the AFL – and other sports – he told me that he has found much more time and energy to be devoted to the things of God this past year.

Anything that brings us closer to God is usually a good thing. And leaving things which may be neutral in order to spend more time with God is a good thing as well. One need not even be addicted to sport, and overly obsessed with it. But if you spend, say, 8-10 hours a week watching sport, but barely 8-10 minutes a week praying or reading Scripture, then your priorities are wrong. You have an idol in your life.

Let me close with a few quotes from a few great men of God on this issue. First, just what is an idol? D. L. Moody put it this way: “You don’t have to go to heathen lands today to find false gods. America is full of them. Whatever you love more than God is your idol.”

A. W. Pink said an idol is “anything which displaces God in my heart. It may be something which is quite harmless in itself, yet if it absorbs me, if it be given the first place in my affections and thoughts, it becomes an ‘idol’. It may be my business, a loved one, or my service for Christ. Any one or any thing which comes into competition with the Lord’s ruling me in a practical way, is an ‘idol’.”

Calvin long ago reminded us that “Man’s nature, so to speak, is a perpetual factory of idols.” And we must acknowledge how idol-prone we all are. G. Campbell Morgan was correct to say this:

It is as impossible for a man to live without having an object of worship as it is for a bird to fly if it is taken out of the air. The very composition of human life, the mystery of man’s being, demands a center of worship as a necessity of existence. All life is worship. There may be a false god at the center of the life; but every activity of being, all the energy of life, the devotion of powers—these things are all worship. The question is whether the life and powers of man are devoted to the worship of the true God or to that of a false one.

As mentioned above, we must take strong steps to break the hold of the idolatry in our lives. Charles Spurgeon put it this way: “False gods patiently endure the existence of other false gods. Dagon can stand with Bel, and Bel with Ashtaroth; how should stone, and wood, and silver, be moved to indignation; but because God is the only living and true God, Dagon must fall before His ark; Bel must be broken, and Ashtaroth must be consumed with fire.”

Finally, R. C. Sproul reminds us that we need help from above to break free from the shackles of idolatry:

Loving a holy God is beyond our moral power. The only kind of God we can love by our sinful nature is an unholy god, an idol made by our own hands. Unless we are born of the Spirit of God, unless God sheds His holy love in our hearts, unless He stoops in His grace to change our hearts, we will not love Him… To love a holy God requires grace, grace strong enough to pierce our hardened hearts and awaken our moribund souls.

So by all means, if you want to watch the Big Game today, and can do so without letting it become an idol in your life, then go right ahead. But there may be some people reading this who really do need to pray about whether their sport has taken over their life, and they may well need to get their priorities right.