All sixty-six books of the Bible are vitally important reading for the Christian of course, and in this series I have looked at all of them. But I must say that some books are so very important that they really deserve special attention. This is certainly the case with Deuteronomy.

But like most of the Old Testament, far too many Christians today ignore Deuteronomy altogether. They do so to their own detriment. Thus it is well worth offering this brief introduction to this book in the hopes that it might stimulate some of you to give it a close reading – perhaps for the very first time. 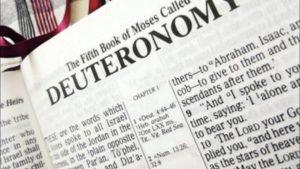 ‘Second law’ is a basic translation of this book’s title. So Deuteronomy gives us a repetition or copy of the law, and we do find a restatement of covenant and the various laws given in Exodus, Leviticus and Numbers. The Ten Commandments are of course primary, and are found in both Exodus 20 and Deuteronomy 5.

This final book found in the Torah is an important book in so many respects. Simply consider how often it is quoted from by Jesus and the apostles. The New Testament as a whole directly or indirectly quotes from it around a hundred times, and Jesus quotes from it more than any other Old Testament book.

Jesus for example quotes from Deuteronomy when Satan tempts him three times (see Matthew 4:1-11). Those facts alone should make us pay careful attention to this book. But Deuteronomy also serves as a bridge between the Pentateuch and the rest of the historical books. The book looks back to what has gone before, and looks ahead to how the people of Israel must proceed. Daniel Block says this about the book:

The theological significance of Deuteronomy can scarcely be overestimated. Inasmuch as this book offers the most systematic presentation of theological truth in the entire Old Testament, we may compare its place to that of Romans in the New Testament. Moreover, since Deuteronomy reviews so much of Israel’s historical experience of God’s grace as recounted in Genesis through Numbers, a comparison with the gospel of John may be even more appropriate.

Chris Wright also emphasises the theological importance of this book: “Deuteronomy has been aptly described as the heartbeat of the OT. Feel the pulse of Deuteronomy and you are in touch with the life and rhythm of the whole Hebrew Bible. Indeed, if we add the influence of the book on Jesus, Paul, and the early NT church, it is a profoundly significant book in the whole Christian canon of scripture.”

Or as John Scott Redd states:

The book of Deuteronomy constitutes the theological core of the Old Testament. . . . Deuteronomy is often referred to as the hub around which the entire Old Testament revolves. Perhaps a better metaphor is that of the engine, one that is ignited and fuelled by the stories of the Pentateuch and whose motion drives the subsequent histories, prophecies, and teachings that come after it. The book of Deuteronomy is a powerhouse of the Old Testament, a distillation not only of covenant theology but also of covenant history in the past and the future.

As mentioned, it links the initial books of Scripture with what follows. As Hubbard and Dearman put it:

Deuteronomy is inadequately described as the final book of the Pentateuch (Torah). It is certainly that, but as it elaborates on several elements now represented in Genesis through Numbers in sermonic mode, it does so in order to instruct Israel about corporate life as God moves the people forward. In some ways, therefore, it serves not only as the conclusion to the Torah but as a capstone to it, distilling and expanding on earlier materials once more before Moses dies. In doing so, Deuteronomy also points forward and foreshadows what will happen after Moses dies and the tribes enter the land promised to their ancestors.

And it is certainly relevant for believers today. Seeing the book as an extended farewell address by Moses to the people of Israel, there is much we can take from this. The various challenges they faced back then are also our challenges. As Ajith Fernando puts it:

“How can we remain faithful to God? How can we avoid compromise when the lure of the society around us is so powerful? And how can we help our children and the people we lead to be faithful? Deuteronomy tells us how Moses tackled these challenges. After citing a story that appears in Deuteronomy, Paul writes, “Now these things happened to them as an example, but they were written down for our instruction” (1 Cor 10:11). Therefore I have approached every passage of Deuteronomy as having significance to Christians today.

Scholars have noted how this book seems to be similar in structure to the pattern of ancient Near Eastern treaty documents. Redd says that while the elements differ slightly, the basic format of such treaties emerges as follows:

As to a breakdown of the book itself, Arnold and Beyer offer this brief outline:

As always, there is plenty of literature available for those wanting to study this book in much more detail. And as always, commentaries are a great resource here. As has been the norm, what I offer are a number of commentaries that basically come from a conservative and/or evangelical perspective. Here are some of the better ones:

As to my preferred commentaries, they may be Block, Woods and Wright.