This is a passage that bothers many people. Some find it to be quite appalling in fact. As Peter Leithart remarks, it is “one of the most controversial passages in Scripture.” The problem is this: it seems that a prophet had some kids punished – if not killed – for just being kids and making a few wisecracks.

Or so it seems. But let’s begin by running with the actual passage: 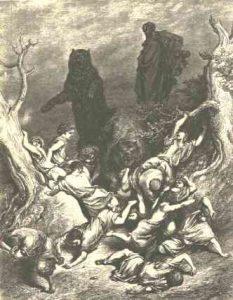 From there Elisha went up to Bethel. As he was walking along the road, some boys came out of the town and jeered at him. “Get out of here, baldy!” they said. “Get out of here, baldy!” He turned around, looked at them and called down a curse on them in the name of the Lord. Then two bears came out of the woods and mauled forty-two of the boys. And he went on to Mount Carmel and from there returned to Samaria.

So what are we to make of Elisha’s curse on these boys? Was he just being a grumpy old man resorting to overkill? Was he so hate-filled and intolerant that he is not able to take a bit of jesting? Many think that the prophet overreacted, and this was not a very godly or loving thing to do.

Well, a number of things can be said about all this, so let me raise seven important points that must be borne in mind. First, consider the context. We first learn about Elisha in 1 Kings 19. There we find the Lord telling Elijah to “anoint Elisha son of Shaphat from Abel Meholah to succeed you as prophet” (v. 16).

The first 18 verses of 2 Kings 2 speak of how Elijah’s anointing as prophet is transferred to Elisha, and how Elijah is taken up to heaven. Verses 19-22 record his first miracle: the curing of the water. All this leads up to the story of Elisha and the youth.

Second, consider where this action took place. Bethel was a place of idolatry and rebellion. Leithart reminds us that Bethel was the site of Jeroboam I’s golden calf shrine (1 Kings 12). As Iain Provan remarks: “For the authors of Kings, Bethel is a city that provides the focal point of Israel’s apostasy (cf. 1 Kgs. 12:25-13:34). It is no surprise to find the children adopting a disrespectful attitude towards a prophet.”

Third, consider who actually were being cursed here. Were they in fact mere children? The Hebrew phrase in question may be a bit more elastic than some of our English translations would indicate. As Paul House notes, it can “refer to youths from twelve to thirty years old (cf. 1 Sam 16:11-12; 2 Sam 14:21; 18:5), i.e., old enough to show respect for God’s prophet.”

And this may well have been a gang of young thugs threatening his very safety – “comparable to a modern street gang” as Geisler and Howe put it. And note that some were mauled, so there may well have been more than 42 of them. Such a large group of potentially menacing young people was a genuine threat indeed.

Fourth, bear in mind the nature of divine blessings and divine curses. Both were promised to the nation of Israel by YWHW in places like Deuteronomy 27-28 and Leviticus 26. God sends both, depending on how the people act: blessings for obedience and curses for disobedience.

Comments Paul House: “This punishment comes as a punishment of the Lord, in whose name the curse was offered (cf. Lev 26:21-22). The youths were typical of a nation that ‘mocked God’s messengers, despised his words and scoffed at his prophets’ (2 Chr 36:16).”

Dale Ralph Davis is worth quoting at length here:

We must size up these bears correctly. They were covenant bears. The covenant curse of Leviticus 26:22 (‘I will let loose the wild beasts among you, which shall rob you of your children’) explains the episode. Covenant infidelity (hatred of Yahweh’s representative and, perhaps, persisting in Bethel’s perverse worship) has brought the covenant curse. . . . Here is not an irritable prophet but a judging God.

The taunt is not merely childish mocking of ‘male-pattern baldness,’ and its darker intent suggests the mockers are not merely children. . . . Here Elisha’s baldness is held up derisively in contrast to Elijah’s hairiness (1:8); he is not Elijah, and they mock the succession that has occurred. . . . While the sons of the prophets and the city of Jericho honoured Elijah’s spirit within YHWH’s new prophet, the men of Bethel do not. Their denigration calls down a curse upon them; its immediate execution further affirms YHWH’s prophet.

Sixth, we have to note what the text does and does not say. It actually does not say that the 42 were killed – it just says they were mauled. As Russell Dilday comments, “The Hebrew word translated ‘mauled’ might indicate less serious injuries. The ultimate outcome of the miracle was to break up the gang, frighten the offenders and the entire village, and punish them not so much for insulting Elisha as for their impiety.”

Seventh, I mentioned above that Elisha seems like a ‘grumpy old man’. But in fact, he may have been rather young. As Walter Kaiser comments, after piecing together the biblical dates and data: “But was Elisha an old man short on patience and a sense of humour? This charge is also distorted, for Elisha can hardly have been more than twenty-five when this incident happened.”

Let me wrap this up with two concluding quotes. August Konkel says this: “The taunting of the young men should not be viewed as immature juvenile activity. (2:23). . . . The mauling of the youthful mob is not vindictive anger on behalf of Elisha but divine judgment for culpable denial of the divine purpose. The bears are no less divinely appointed than the whale that swallowed Jonah.”

And as Walter Kaiser says, “Instead of demonstrating unleashed cruelty, the bear attack shows God trying repeatedly to bring his people back to himself through smaller judgments until the people’s sin is too great and judgment must come full force.”