I believe that the abortion debate is a gospel issue. It is vitally important to our Lord, and it should be vitally important to us. In the same way Christian abolitionist William Wilberforce believed that slavery was a gospel issue. Sure, both are moral, social and legal issues that are distinct from how a person gets right with God through Christ, but they are something all Christians should be deeply concerned about and involved in nonetheless. 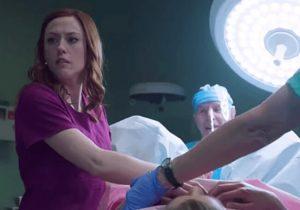 I say this because already we have some Christians complaining about the pro-life film Unplanned for various reasons. I have already heard a bunch of things said by some believers who dislike the film and/or do not plan to see it, including:
-It does not glorify God
-A guy from Bethel is in it(!)
-Oh, but Abby Johnson is a Catholic
-It does not preach the gospel

Good grief. One of the most important prolife films yet made which is having such a profound impact on the culture of death, yet some Christians want nothing to do with it. Instead of rejoicing that even prochoicers are being deeply impacted by this film, they join with other armchair critics, blasting the film.

One American pastor for example basically trashed the film, claiming it was not a Christian film, and thus more or less a waste of time. A quick look at his website reveals that he is clearly no friend of Catholics and seems to be a bit of a heresy hunter. He wrote:

The second thing I want to be upfront about is this—the gospel is not in this movie. This is a pro-life film more than it is a Christian film, and those two things are not synonymous. The God-fearing Christian cherishes all human life as sacred from conception to natural death. But not all who call themselves pro-life are Christians. While the movie might win some people to the pro-life side of the political aisle, no one will leave the theater a Christian because no one will have heard the gospel.

Um, guess what: that was NOT the intention of the film! If it were, it would have been done differently. And it always must be said that every single film – or book, or article, or poem, or song, or piece of art – does NOT need to include John 3:16 somewhere in it on every single occasion. I do not include it in every article or book that I write. Does that mean I am really the devil in disguise, a false prophet, likely the antichrist, or ashamed of the gospel?

Indeed, one person commenting in the thread under a social media post of that article made that very claim – at least generically – by quoting Romans 1:16. Oh dear. The purpose of the film was NOT to preach a clear message of how lost sinners find salvation. That is always vitally important of course, but I am sure that even this particular pastor does not do it every single time he opens his mouth or puts pen to paper.

The film was the story of one person who was deeply involved in Planned Parenthood, and then left and became an active prolifer. That was the reason the film was made. When we judge something for not doing what we want it to do, even though those behind it did not have that intention, then we are shooting down straw men.

If the makers of the film had said that their clear intention was to outline the plan of salvation so sinners could get right with God through Christ, then yes, we could maybe then slam the film and the filmmakers for not delivering on what they said they wanted to do.

But of course they never said that was their intention. So slamming them for not doing what we may have wanted them to do is really quite silly. Indeed, the movie was directed and co-produced by two Catholic filmmakers. If it were made by some solid evangelicals, we might have had a bit more reason to make a stink.

But even then, as I say, one need not have a clear gospel presentation in every single thing we do or say. Standing up for the unborn IS in itself a tremendously important thing for all Christians to be involved in. We of course have plenty of biblical injunctions to do this very thing.

Sure, the ideal would always be to both save life – be they unborn babies or those at the end of life being bumped off prematurely, etc. – and see them come to a saving knowledge of Jesus Christ. But some things are important in themselves. When people like Corrie ten Boom helped to save Jews from the Nazis in WWII, that was a good thing in and of itself.

I am sure she would sometimes share the gospel with these folks, and some may have come to a saving knowledge of Jesus Christ. But even if not, what she did was good, and right, and important – she was living out her Christianity in very real ways.

In the same way when Wilberforce worked to free the slaves, that was a good thing in itself. Undoubtedly he may have shared the gospel with some of them along the way. But it was a good thing – a Christian thing – to be involved in the work of abolition.

The strange thing is, some of these critics who are dumping on the film seem to be part of the Reformed faith. If so, they of all people should know that the Lordship of Christ should extend to every area of life. Thus making prolife films which may or may not have John 3:16 uttered ten times throughout would be a fully Christian endeavour.

Let me remind you of a few things: I AM an evangelical Christian. I think it is vitally important to evangelise and share the gospel with others. But I do NOT do this in everything I do or everything I say. Sometimes just writing a good article on the importance of the sanctity of life is in itself an important Christian witness. It is a key biblical imperative.

In my nearly 5000 articles on my website you will often find me explaining the gospel of Jesus Christ – that he died for sinners so that by faith and repentance we can get right with God. But I do not have it in all my articles – not even close. And I make no apology for that.

If these critics of Unplanned think therefore that I am a false prophet and an apostate because of this, well, so be it. I will keep doing what God has called me to do. I will heed Paul’s advice that in everything I do, I seek to bring glory to God. So, being a good writer can bring glory to God.

As I said, I am so very thankful that Unplanned has been made and is having such a powerful impact. As but one example, we had a review in a Florida newspaper by one pro-choicer who saw the film and it impacted her deeply. As she wrote:

“By the end of the film, I was completely distraught, questioning everything I had ever believed about what abortion really was. I was hungry for more information, I went to Google, I talked with friends and I prayed.”
www.centralfloridapost.com/2019/03/28/a-pro-choice-review-of-pro-life-film-unplanned/

Does this mean she became a born-again Christian as a result of seeing the film? I don’t know, but I am thankful nonetheless that one more person has come to a more prolife point of view. Yes, we should pray that she becomes a Christian, if she is not already one.

So I will keep promoting the film. Is it perfect? No – nothing in this life is perfect. But to be honest with you, I really do tire of all the armchair critics out there, and all the heresy hunters. They often do as much harm as good in their constant criticisms.

Yes, I DO believe in sharing the gospel of Jesus Christ. But I also believe that standing up for the sanctity of life is another very important part of my Christian witness. I will NOT foolishly let critics try to force me to choose between one or the other. I will continue to do both, for the glory of God.

22 Replies to “Unplanned, Abortion and the Gospel”