Christians can often have some rather cloudy thinking when it comes to issues such as our calling as believers, Christian ministry, and what it means to glorify God. As to the issue of bringing glory to God, there are some unbiblical extremes we must avoid.

On the one hand, some believers think that if they are just nice guys, smile a lot, and seek to never offend anybody, they are glorifying God and being terrific Christians. Well, not quite! But on the other hand, there are some who think that unless we quote John 3:16 in everything we say or do, we are not glorifying and not being a good Christian witness. Not quite again.

That we should always seek to glorify God is something Scripture often speaks to. Consider 1 Corinthians 10:31: “So whether you eat or drink or whatever you do, do it all for the glory of God.” Or Colossians 3:17: “And whatever you do, whether in word or deed, do it all in the name of the Lord Jesus, giving thanks to God the Father through him.” 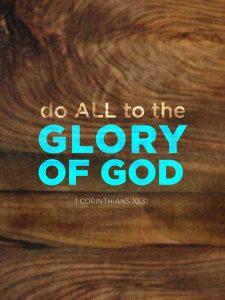 But some believers seem to think that unless they are doing something like standing on a street corner handing out gospel tracts, they are not really doing the Lord’s work, they are not involved in Christian ministry, and they are not glorifying the Lord.

Sorry, but doing whatever God has called us to do faithfully and fervently is Christian work and brings glory to God. For example, I know of homemakers who struggle greatly just to be a good mother and wife. One I know of has all sorts of debilitating health issues, has a special needs son, and has an unbelieving husband.

I tell you: her testimony is incredible, and the glory she is bringing to God is profound. She does not quote John 3:16 every time she opens her mouth, but her life is a living epistle of the gospel of God. God bless you sister – you are a champion, more than you might ever realise.

And this is true of so many other believers. A humble janitor in a church who diligently and faithfully washes the floors when the crowds are gone is doing the Lord’s work and is being a great Christian witness. Sure, the pastor gets all the attention, all the fame, all the kudos, and all the praise. But thank God for dedicated janitors as well.

I write all this because yesterday I felt the need to write a piece on the prolife film Unplanned and offer a bit of a defence of it. When I first wrote on the film, I spoke of an attack on it – by all the usual suspects: leftists, atheists, pro-aborts, etc. I did not think I would have to write another piece dealing with all the Christian attacks on it!

My first article is here: billmuehlenberg.com/2019/03/31/the-war-against-unplanned/

And the follow-up piece is this: billmuehlenberg.com/2019/04/03/unplanned-abortion-and-the-gospel/

As I mentioned in the second article, critics who claim the film does not offer a clear gospel message or doesn’t glorify God and the like are quite off base. Um duh… it was NOT meant to be an evangelistic film! And I would have thought that when we stand and fight for the things so very close to the heart of God like the sanctity of life, we ARE glorifying God.

So these armchair critics really don’t seem to get it. This film is one of our most powerful prolife tools in years, and yet some of these critics just want to trash it. Go figure. Some of them have had various theological and doctrinal concerns as to who was involved in the film, etc.

Well, let me say this. Anyone who knows me knows that I very strongly believe that sound doctrine is important, and we need to be careful with what we believe. But there is always a very fine line between being concerned about proper doctrine, being discerning, etc., and being a purist who seeks to be ‘uncontaminated’.

The former is what we should carefully and prayerfully strive for. But the latter we should avoid, as such folks really do look and act just like the Pharisees did. Sadly some of these critics just do not want to be seen to be ‘impure’ or ‘contaminated’ in any way, so they seem to prefer business as usual when it comes to 45-50 million babies a year being slaughtered. It is quite sad actually.

I have written before about this problem with various types of purists. As but one example, we had the same situation when a prolifer ran for the US Presidency some years ago. But because he was also a Mormon, plenty of Christians refused to vote for him.

As an evangelical I am of course fully aware of major theological concerns with this group. But these Christians would rather have the baby-killing, pro-Islam, anti-Christian Obama in office destroying America, instead of having Romney in the White House. I wrote about that at the time. See here: billmuehlenberg.com/2016/04/03/purists-politics-presidents-pharisees-dead-babies/

It is the old problem I have had to deal with time and time again. Sorry, but there are just far too many armchair critics and heresy hunters out there. Yes, doctrine matters as I keep saying. But so too does the sanctity of life. I am willing to work with all sorts of folks to help save the unborn, be they religious or non-religious.

But those matters I have also written about often. See this on co-belligerency: www.billmuehlenberg.com/2010/09/02/on-co-belligerency/

And see this on the worry of heresy hunters: billmuehlenberg.com/2014/04/09/on-heresy-hunters/

But let me finish by getting back to my original theme. Just what does it mean to be a Christian witness? How does all this work when one is a Christian who is a chef or an accountant or a writer or an artist or a musician for example? As I said, we should do all for the glory of God.

As I said in one earlier piece:

Again, we can represent our Lord in so many acceptable and biblical ways. It need not always involve sharing biblical quotes all the time, being a pastor, or serving as an overseas missionary. Yes there is of course a place for all that. But we need a bigger view of our role in the world.

We need to bear in mind the importance of seeing the Lordship of Christ extend to every area of life. Recall the words of the noted Dutch Christian, politician and theologian Abraham Kuyper. Commenting on Psalm 24.1 he said, “The earth is the Lord’s, and everything in it, the world, and all who live in it.”

Or as a more recent voice put it, “Christianity is not just involved with ‘salvation’, but with the total man in the total world. The Christian message begins with the existence of God forever, and then with creation. It does not begin with salvation. We must be thankful for salvation, but the Christian message is more than that. Man has a value because he is made in the image of God” (Francis Schaeffer, Art and the Bible).

Other Christian thinkers have spoken in similar fashion. Luther famously taught about the importance of vocation and Christian calling. He sought to play down the sharp distinction between clergy and laity, and show that ALL believers have an important role to play in Christian work and witness.

Thus he viewed work as not merely a job or an occupation to pay the bills, but as a divine calling. It is a heavenly vocation, something given us from God and for his glory. So again, the committed and diligent dishwasher or cakemaker can just as much bring glory to God as the megachurch pastor or famous Christian leader.

So I for one will give thanks that a solidly pro-life film like Unplanned has been made. Is it perfect? No, neither is any Christian, any church, any pastor, or any theology. But if it helps to save lives from the abortion mills and turns pro-choicers into pro-lifers I will be very grateful indeed, and I will rightly believe that God has been glorified in it all.

9 Replies to “Christian Ministry, Vocation, and the Glory of God”