Any excuse will do to write another piece on the late R. C. Sproul and one of his all-time classic works. The American theologian and pastor (1939–2017) wrote The Holiness of God back in 1985, with a revised version coming out in 1998.

It really is a superb volume which is always worth promoting and quoting from. I have of course already done a review of this vital book back in 2010: billmuehlenberg.com/2010/07/31/a-review-of-the-holiness-of-god-by-r-c-sproul/ 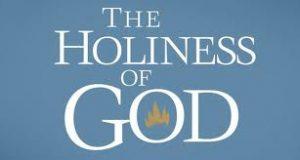 In it I offered some brief quotes from this excellent volume. But since I had cause to pick it up again yesterday for another piece I was writing, I was again struck by what a significant and valuable volume this is. That article was about the taking of Canaan by the Israelites, and some of the moral problems that have arisen concerning that.

As I was flipping through Sproul’s book I noticed that he speaks to this matter in one of his chapters. I did not quote it in my earlier piece, but it did occur to me that another article would be fully justified nonetheless! So here it is. Here I want to look at just one chapter of this book, Chapter 6: “Holy Justice.”

In 30 pages he deals with a number of issues that Christians can sometimes be concerned about as they read the Old Testament. Some believers “struggle with the apparent brutality of God’s judgments found there.” So he looks at some of the obvious cases found in the OT: the death of Nadab and Abihu (Leviticus 10); the death of Uzzah (1 Chronicles 13); and the judgment on Sodom and Gomorrah (Genesis 19).

We need to get the bigger theological picture in order to properly understand these cases. Unless we do, we will have a real hard time with stories like this. Says Sproul, “we do not understand four vitally important biblical concepts: holiness, justice, sin, and grace.” He explains:

However, God does not always act with justice. Sometimes He acts with mercy. Mercy is not justice, but it is not injustice. Injustice violate righteousness. Mercy manifests kindness and grace and does no violence to righteousness. We may see nonjustice in God, which is mercy, but we never see injustice in God.

He also looks at various sins that merited the death penalty in the OT, and asks if this was just. Yes it certainly was, he says, and he reminds us of the heinousness of sin. He reminds us that our sin has turned us all into traitors against our rightful King. He writes:

Sin is cosmic treason. Sin is treason against a perfectly pure Sovereign. It is an act of supreme ingratitude toward the One to whom we owe everything, to the One who has given us life itself…. The slightest sin is an act of defiance against cosmic authority. It is a revolutionary act in which we are setting ourselves in opposition to the One to whom we owe everything. It is an insult to his holiness….

The issue is not why does God punish sin but why does He permit the ongoing human rebellion? What prince, what king, what ruler would display so much patience with a continually rebellious populace? …We forget rather quickly that God’s patience is designed to lead us to repentance, to give us time to be redeemed. Instead of taking advantage of this patience by coming humbly to Him for forgiveness, we use this grace as an opportunity to become more bold in our sin… The supreme folly is that we think we will get away with our revolt. Far from being a history of a harsh God, the Old Testament is the record of a God who is patient in the extreme.

He then goes on to look at the conquest of Canaan, the topic of my two-part article from yesterday: billmuehlenberg.com/2019/04/23/the-conquest-of-canaan-part-one/

This in part is what he has to say on the matter:

The holiness of God is at the heart of the issue of the conquest of Canaan. It was because of his holiness that the act was ordained. On the one hand He moved to punish the insult to His holiness that was daily perpetrated by the Canaanites. On the other hand He was preparing a land and a nation for a holy purpose. . . . God did not choose Israel because Israel was already holy, He chose them to make them holy.

The false conflict between the two testaments may be seen in the most brutal act of divine vengeance ever recorded in Scripture. It is found not in the Old Testament but in the New Testament. The most violent expression of God’s wrath and justice is seen in the cross. If ever a person had room to complain of injustice it was Jesus. He was the only innocent man ever to be punished by God. If we stagger at the wrath of God, let us stagger at the cross. Here is where our astonishment should be focused. If we have cause for moral outrage, let it be directed at Golgotha.

The Cross was at once the most horrible and the most beautiful example of God’s wrath. It was the most just and the most gracious act in history.

He gives an interesting personal example of the difference between justice and mercy, and then remarks:

Old Testament history covers hundreds of years. In that time God was repeatedly merciful. When His divine judgment fell on Nadab and Uzzah, the response was shock and outrage. We have come to expect God to be merciful. From there the next step is easy: We demand it. When it is not forthcoming, our first response is anger against God, coupled with the protest: “It isn’t fair.” We soon forget that with our first sin we have forfeited all rights to the gift of life. That I am drawing breath this morning is an act of divine mercy. God owes me nothing. I owe Him everything. If He allows a tower to fall on my head this afternoon, I cannot claim injustice. One of our basic problems is the confusion of injustice and mercy….

It is impossible for anyone, anywhere, anytime to deserve grace. Grace by definition is undeserved. As soon as we talk about deserving something, we are no longer talking about grace; we are talking about justice. Only justice can be deserved. God is never obligated to be merciful. Mercy and grace must be voluntary or they are no longer mercy and grace. God never “owes” grace.

And finally, a quote from him that I have used many times before.

Since it is our tendency to take grace for granted, my guess is that God found it necessary from time to time to remind Israel that grace must never be assumed. On rare but dramatic occasions He showed the dreadful power of His justice. He killed Nadab and Abihu. He killed Uzzah. He commanded the slaughter of the Canaanites. It is as if He were saying, “Be careful. While you enjoy the benefits of my grace, don’t forget my justice. Don’t forget the gravity of sin. Remember that I am holy.”

Amen. And all this from just one chapter of a 226-page book. I can only hope that I have whetted your appetite enough that you go out and buy this book. It is a life-changer. And please get two copies of it: one for yourself and one for a friend. They will thank you for it.