Whenever another horrible Islamic terrorist attack takes place – and these are now daily occurrences sadly – you will get various Christophobes and/or Islamophiles trying to argue that Christians are just as bad: they too support violence and bloodshed. And as “proof” of this they will bring up the Old Testament story of Israel’s conquest of Canaan.

Angry atheists of course mention this with great glee at every possible opportunity. Consider just one obvious example. In his best-selling 2006 book The God Delusion, Richard Dawkins really gets into it as he seeks to trash the God of the Old Testament, especially in light of the taking of Canaan. Early on in his book he offers us these now familiar and fiery words: 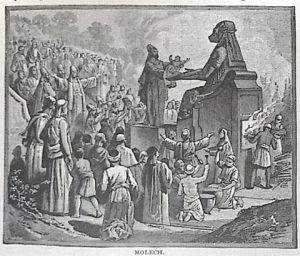 “The God of the Old Testament is arguably the most unpleasant character in all fiction: jealous and proud of it; a petty, unjust, unforgiving control-freak; a vindictive, bloodthirsty ethnic cleanser; a misogynistic, homophobic, racist, infanticidal, genocidal, filicidal, pestilential, megalomaniacal, sadomasochistic, capriciously malevolent bully.”

And in a chapter looking at Old Testament morality he says this:

The ethnic cleansing begun in the time of Moses is brought to bloody fruition in the book of Joshua, a text remarkable for the bloodthirsty massacres it records and the xenophobic relish with which it does so. . . . And the Bible story of Joshua’s destruction of Jericho, and the invasion of the Promised Land in general, is morally indistinguishable from Hitler’s invasion of Poland, or Saddam Hussein’s massacres of the Kurds and the Marsh Arabs.

But even those who should know better make the same foolish claims. For example, popular religious writer Karen Armstrong – who is ever eager to act as an apologist for Islam while slamming Christianity – claims that the Bible is full of violence, much more so than the Koran, and that Islam is really a peaceful religion.

Plenty of other such quotes could be offered here. So how should Christians respond to charges such as this? Admittedly many Christians can be a bit squeamish about God’s commands to the Israelites to conquer Canaan and drive out its inhabitants. But much can be offered by way of a defence of biblical morality and the justice of God.

It should be pointed out that to do proper justice to this topic, a number of articles would be required, if not entire books. And indeed, plenty of those resources do already exist – see my bibliography at the end of Part Two. But let me here offer just a very short and sketchy introduction to how we might understand this issue. Seven key points can be raised.

First, it was because of the overwhelming wickedness and evil of the Canaanites that in large measure moved God to have them displaced. Two key biblical passages on this are:

Genesis 15:13, 16: Then the LORD said to him, “Know for certain that for four hundred years your descendants will be strangers in a country not their own and that they will be enslaved and mistreated there. . . . In the fourth generation your descendants will come back here, for the sin of the Amorites has not yet reached its full measure.”

Deuteronomy 9:5: It is not because of your righteousness or your integrity that you are going in to take possession of their land; but on account of the wickedness of these nations, the Lord your God will drive them out before you, to accomplish what he swore to your fathers, to Abraham, Isaac and Jacob.

And just what was so bad about the Canaanites and their religion? The people, following the lead of their gods, were heavily into things like incest, bestiality, child sacrifice, and homosexuality. These were all things that Yahweh had already expressly forbidden (see eg., Leviticus 18:20-30).

Even in our secular, godless and immoral times, many of those activities are still seen as being beyond the pale. The Canaanites had reached the point of no return. Their sin had “reached its full measure”. So the land God was giving to the Israelites had to be cleared of this appalling wickedness. As we find in other texts:

Leviticus 18:24-25 Do not defile yourselves by any of these things, for by all these the nations which I am casting out before you have become defiled.

And these acts of immorality and evil were not just isolated events, but wrapped up in the very nature of Canaanite religion. As Walter Kaiser explains:

Similar to the gods they worshiped, they too were guilty of incest and all types of social and sexual wickedness. For example, they, in imitation of their gods, were involved in bestiality, homosexual acts, temple sex, and even child sacrifice. Instead of reflecting the image of the true God, the Canaanites reflected the image of the gods and goddesses they worshiped, thinking that by acting as the gods and goddesses acted, there would be some sort of magical help that would produce fertility, not only in humans but in their animals and crops as well.

By the way, this may in part explain why even animals were to be included in the destruction meted out by the Israelites. With bestiality being a core part of these pagan religions, God had to act. Perhaps God was even stopping the spread of sexually transmitted diseases in doing this. And he had made clear his views on the matter in Mosaic law:

It is important to point out that the pentateuchal commands to destroy the Canaanites are not ongoing, permanent laws at all. Rather, they applied only to a certain temporary ancient Israelite historical situation, and their application was to cease when the job was done. In this grim work, the Israelites were to go exactly as far as God commanded but no farther. This does not justify destruction of nations or ethnicities at any other time or place.

Or as John Goldingay puts it:

Israel’s dispossessing the Canaanites appears in Scripture not because it is a model for what might happen again but because it is not. It happened once for all. Because the event had foundational significance, Yhwh’s commission to Israel to attack the Canaanites was not a model for subsequent Israelite military practice; it was no more a model or precedent than Abraham’s offering of Isaac was a model for subsequent Israelite fatherhood.

Third, the Canaanites had time to repent. God always seeks to grant mercy to people if they will turn from their sins and repent. Simply note how grace was shown in the Gen. 15 passage that I cited above. God had been warning about this for some 400 years in advance!

In the same way the people in Noah’s day had 120 years to repent as well while the ark was being constructed (see Genesis 6:3). And even the pagan Canaanite prostitute Rahab was fully aware of these truths (see Joshua 2:8-11 for example).

Indeed, people today should keep in mind the words of the Apostle Peter as found in 2 Peter 3:9-15 in this regard:

The Lord is not slow in keeping his promise, as some understand slowness. Instead he is patient with you, not wanting anyone to perish, but everyone to come to repentance. But the day of the Lord will come like a thief. The heavens will disappear with a roar; the elements will be destroyed by fire, and the earth and everything done in it will be laid bare. Since everything will be destroyed in this way, what kind of people ought you to be? You ought to live holy and godly lives as you look forward to the day of God and speed its coming. That day will bring about the destruction of the heavens by fire, and the elements will melt in the heat. But in keeping with his promise we are looking forward to a new heaven and a new earth, where righteousness dwells. So then, dear friends, since you are looking forward to this, make every effort to be found spotless, blameless and at peace with him. Bear in mind that our Lord’s patience means salvation.

Fourth, this was a localised judgment of God on a sinful people. The judgment on Sodom and Gomorrah would be another such particular act of judgment. But of course the just judgment of God is something that we all must face one day. At the moment we are all now being shown great mercy.

And those who come to the work of Christ at Calvary and avail themselves of what he did on our behalf find shelter from that judgment, since Christ was smitten for us and our sins, so by faith and repentance we find pardon and forgiveness of our sins. But those who reject Christ and what he did are still under the judgment of God, and will one day face the music.

God will judge all unbelievers at the very end of history and at that time definitely demonstrate his justice and vindicate himself as being truly just and righteous. The command to destroy the Canaanites was an anticipation of this latter-day judgment. . . . The execution of a temporary physical death on a fraction of all classes of humanity living in a small part of the world at a particular historical time (the Canaanites) was to point forward to the final, eternal, spiritual, and physical death to be executed universally on all the ungodly inhabitants of the entire earth who had lived throughout history.

Part Two of this article can be found here: billmuehlenberg.com/2019/04/23/the-conquest-of-canaan-part-two/

4 Replies to “The Conquest of Canaan – Part One”