This is the conclusion to an article which looks at the issue of the conquest of Canaan by the Israelites and various moral and religious problems that can arise as a result. It offers seven considerations in total, the last three of which are found here.

Fifth, we can ask whether the Israelites were to fully annihilate the Canaanites or to merely drive them out of the land. The truth is, there is some ambiguity here, and both options are spoken about in Scripture. Indeed, I have collected around a hundred passages on this matter in a personal concordance. Some of the verses clearly speak about destroying the people of Canaan. Here are just a few examples of this:

Deuteronomy 20:16-17 However, in the cities of the nations the Lord your God is giving you as an inheritance, do not leave alive anything that breathes. Completely destroy them—the Hittites, Amorites, Canaanites, Perizzites, Hivites and Jebusites—as the Lord your God has commanded you.

Joshua 10:32 The Lord gave Lachish into Israel’s hands, and Joshua took it on the second day. The city and everyone in it he put to the sword, just as he had done to Libnah. 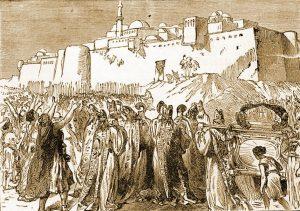 Joshua 24:8 I brought you to the land of the Amorites who lived east of the Jordan. They fought against you, but I gave them into your hands. I destroyed them from before you, and you took possession of their land.

But many other texts speak of dispossessing the people and/or driving them out of the land. Here are a few of these texts:

Deuteronomy 12:29 The Lord your God will cut off before you the nations you are about to invade and dispossess. But when you have driven them out and settled in their land,

Joshua 3:10 This is how you will know that the living God is among you and that he will certainly drive out before you the Canaanites, Hittites, Hivites, Perizzites, Girgashites, Amorites and Jebusites.

Acts 7:45 Our fathers in turn brought it in with Joshua when they dispossessed the nations that God drove out before our fathers. So it was until the days of David.

And sometimes we have both things mentioned in the same passage, such as in this verse:

Deuteronomy 19:1 When the Lord your God has destroyed the nations whose land he is giving you, and when you have driven them out and settled in their towns and houses…

And the Scriptures make it clear that all the Canaanites were NOT destroyed or driven out, but remained as a thorn in Israel’s flesh. See these verses for example:

Exodus 23:33 “Do not let them live in your land or they will cause you to sin against me, because the worship of their gods will certainly be a snare to you.”

Joshua 17:12–13 The Manassites were not able to occupy these towns, for the Canaanites were determined to live in that region. However, when the Israelites grew stronger, they subjected the Canaanites to forced labor but did not drive them out completely.

Judges 1:19 19 The Lord was with the men of Judah. They took possession of the hill country, but they were unable to drive the people from the plains, because they had chariots fitted with iron.

Judges 1:27–28 states, “Manasseh did not drive out the people of Beth Shan or Taanach or Dor or Ibleam or Megiddo and their surrounding settlements, for the Canaanites were determined to live in that land. When Israel became strong, they pressed the Canaanites into forced labor but never drove them out completely.

Sixth, this was NOT “ethnic cleansing” nor “genocide” as some critics have charged. Bear in mind that the same divine judgments that fell on the Canaanites also ended up falling on Israel when they too committed the same gross and wicked sins. Indeed, many passages had warned the people of Israel of this very thing. Consider just one such text:

Leviticus 18:24-28 Do not defile yourselves in any of these ways, because this is how the nations that I am going to drive out before you became defiled. Even the land was defiled; so I punished it for its sin, and the land vomited out its inhabitants. But you must keep my decrees and my laws. The native-born and the aliens living among you must not do any of these detestable things, for all these things were done by the people who lived in the land before you, and the land became defiled. And if you defile the land, it will vomit you out as it vomited out the nations that were before you.

Israel eventually lost the land for the same reasons that the Canaanites lost it. So this was a moral and spiritual cleansing, not something based on race or ethnicity. This had nothing to do with racism and everything to do with the holiness of God and his implacable resistance to sin and evil – no matter who is doing it, and wherever it is found.

Seventh, and finally, some major differences can be made between violence as found in Islam and the conquest of Canaan. Let me simply offer in outline form what Copan and Flannagan have said on this:

First, military events captured in a biblical canon are merely descriptive of a unique part of the unfolding of salvation history….

Second, whereas the biblical texts offer descriptions of unique history, the Qur’anic texts, by contrast, appear to be issuing enduring commands….

Third, the distinctions between divinely commanded wars in the Old Testament and Islamic jihad are much more pronounced than their similarities.

In sum, we need to resist the bogus moral equivalence so often being pushed here and point out the major differences between Islam and Christianity on this matter. And here is one fundamental difference: if a Christian kills in the name of Christ, he does so in total opposition to the life and teachings of Christ, and the entire New Testament. However, if a Muslim kills in the name of Allah, he has full justification to do so from the life and teachings of Muhammad, and from the Koran, hadith and sira.

But much more can be said on this, so see these articles for much more detail on these matters:

As mentioned, this is a rather vast and complex topic which raises a number of biblical, theological and moral issues. I have only scratched the surface here. The works recommended below will take you much further in all this. But let me finish by offering a few quotes by way of summation.

In his book on Old Testament ethics, Christopher Wright says this:

God’s ultimate purpose of blessing all nations does not eliminate the prerogative to act in judgment on particular nations within history, any more than parents’ long-term and loving desire for their children to flourish prevents them from necessary acts of discipline or punishment in the meantime. On the contrary, it requires such acts. This was equally true for Israel….

So the consistent biblical affirmation that the conquest constituted an act of God’s punishment on a wicked society, using Israel as the human agent, must be taken seriously (by those who wish to take the Bible’s own testimony seriously) and not be dismissed as self-serving disinfectant for the poison of Israel’s own aggression.

There is no justification for what is called “holy war” or jihad in the bible. Instead, believers must sharply distinguish between “Yahweh Wars” and so-called Islamic “holy wars.” They represent two different genres of war.

Moreover, the problem with “Yahweh Wars” in the Old Testament is mainly a problem with God. It is Yahweh himself who starts and carries out such wars. But he is the same God who reveals himself as holy, righteous, just and merciful. Without always resolving just how his anger over sin and deliberate unrighteousness is balanced with his attributes of grace, love, mercy and kindness, the record nevertheless supports both aspects of his character.

What God does in the exercise of both his justice and his mercy is good. We correctly affirm that “God loves the sinner but he hates his sin.”

Finally, Melvin Tinker helps us to see the totality of the biblical storyline:

As God’s wrath and mercy were shown in the conquest, albeit in broken form in a broken world, they are perfectly displayed and transcended in the great conquest of the Cross and will be fully consummated on the Final Day with the return of Christ. It is also the Cross of Christ which puts paid to the false antithesis often posted between the so-called ‘God of the Old Testament’ and the ‘God of the New’….

[It is] the corrective lens of the Cross through which all God’s mysterious purposes of salvation and judgement are to be viewed (including the conquest of Canaan)…. God is white hot holy love. This was shown at a special, unique moment in salvation-history in the entry of God’s people into the land of Promise; it was shown supremely in the salvation of the world on the Cross of Calvary, and all will be consummated at the return of Christ and the wedding supper of the Lamb.

For further reading, see these helpful volumes which cover this in whole or in part:

The above books basically defend the concept of holy war as it applies to the taking of Canaan, but the two volumes edited by Gundry and by Thomas offer a range of viewpoints and perspectives. The most thorough and detailed volume would be Copan and Flannagan’s 2014 work.

Also, most good critical commentaries will of necessity discuss these issues, and will sometimes also feature a special section or excursus on the issue, such as:

Part One of this article can be found here: billmuehlenberg.com/2019/04/23/the-conquest-of-canaan-part-one/

13 Replies to “The Conquest of Canaan – Part Two”