Here is something you can bank on: most Western media personnel, politicians, and commentators will overwhelmingly have one standard for Muslims and another for Christians – both in terms of what they do and what is done to them. The double standards here are as odious as they are obvious. And we again have a perfect example of this with the way  Christchurch and Sri Lanka have been handled.

With some 300 people killed and around 500 injured in the Easter Sunday jihad attacks in Sri Lanka, it is worth asking a few hard questions, especially given the earlier shootings in Christchurch. We all know how the world reacted to that tragedy. 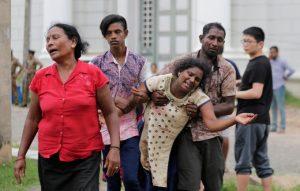 Politicians, the media, and our elites all competed with one another as to who could be seen to be the most one with, and supportive of, all things Islam. With the Christchurch killings we had nonstop media coverage. We had Western leaders becoming dhimmis and wearing head coverings and saying Islamic prayers in parliament, and so on. But things seem all rather different when the killings are in fact Islamic jihad attacks and the victims are Christians. MUCH different.

One person commenting on these matters very astutely said this: “There must be some form of manifesto, some form of document which drove those responsible to perform these horrific acts, and to make them believe what they were doing was correct. That document should be restricted or banned to prevent further people from reading it and becoming radicalized through its content.”

Yes exactly. But we dare not mention the K (or Q) word – depending on our English transliteration of the Arabic word for the Koran! People in New Zealand have been banned from having in their possession the Manifesto of gunman Brenton Tarrant, and some have already been arrested for daring to share it online. (Indeed, a Facebook post of mine from over a month ago in which I simply mentioned the Manifesto has resulted in me just recently getting yet another 30-day sentence in the FB Gulag!)

So why not do the very same thing with the Koran, since this Islamic Manifesto has resulted in millions of deaths at the hands of faithful followers of Muhammad and Allah? Indeed, the very life and example of Muhammed which all true Muslims are meant to fully emulate makes it crystal clear as to why we have 1400 years of Islamic bloodshed.

Muhammad himself engaged in numerous religious wars, acts of violent jihad, and bloodletting. Of course while he was in Mecca for 12-13 years he did not resort to violence. But with the refusal of the people to embrace his new religion he was forced to flee to Medina.

It was there that he said Allah revealed to him that he must fight for the faith, and that he did. He led raiding parties, ordered revenge attacks, engaged in the torture and killing of his enemies, and commanded massacres. His last 10 years at Medina cemented his record as a warlord, a man of violence, and a promoter of bloody jihad.

I have documented all this often before, so let me borrow here from one of my earlier pieces on this: All this is fully enjoined in the Islamic holy book as well. I will not here look at what is said about this in the hadiths, but just offer a sampling of passages from the Koran. These suras (chapters) make it quite clear that the devout Muslim must kill for the faith, just as Muhammad did:

“Slay the unbelievers wherever you find them.” Koran 2:191
“Muslims must not take the infidels as friends.” 3:28
“Any religion other than Islam is not acceptable.” 3:85
“Maim and crucify the infidels if they criticize Islam” 5:33
“Terrorize and behead those who believe in scriptures other than the Qur’an.” 8:12
“Muslims must muster all weapons to terrorize the infidels.” 8:60
“The unbelievers are stupid; urge the Muslims to fight them.” 8:65
“When opportunity arises, kill the infidels wherever you catch them.” 9:5
“The infidels are unclean; do not let them into a mosque.” 9:28
“Fight those who do not believe in Allah or in the Last Day and who do not consider unlawful what Allah and His Messenger have made unlawful and who do not adopt the religion of truth from those who were given the Scripture – [fight] until they give the jizyah willingly while they are humbled.” 9:29
“The Jews and the Christians are perverts; fight them.” 9:30
“Make war on the infidels living in your neighborhood.” 9:123
“Punish the unbelievers with garments of fire, hooked iron rods, boiling water; melt their skin and bellies.” 22:19
“Do not hanker for peace with the infidels; behead them when you catch them.” 47:4
billmuehlenberg.com/2013/09/30/jihad-muhammad-did-it-the-koran-says-it-so-muslims-do-it/

Thus all these horrific acts of butchery, barbarism, and bloodshed that we just witnessed in Sri Lanka, Nigeria and elsewhere in the past few weeks all come straight out of THAT manifesto – that book – and out of the life and example of Muhammad. Muslims kill today because Muhammad killed – and because they are ordered to do so in the Koran.

Muslims terrorise and slay innocent men, women and children because Muhammad did – and their sacred writings command them to. So who is being the true Muslim here? It is quite clear. The “moderates” are not being true to their own faith and their own heritage. The jihadists are.

That is why we should not be asking the question, “Are there moderate Muslims?” Of course there are. Perhaps the majority of Muslims are. But that is not the issue. The real issue is, “Is Islam itself moderate?” And the answer to that question is, “Absolutely not”.

Islam is not just another religion. It is at heart a political ideology and a cult of death. It brooks no rivals, and its followers are ordered to kill all infidels. Everyone must submit to Allah, or face the sword, or live as dhimmies. There are no other options in Islam.

That is why we must not appease those who have sworn to kill us. We must not compromise with those who have vowed to annihilate us. We need to take seriously the words of those who have pledged to overthrow us – and kill us if need be – all in the name of full submission to Allah.

One final but important note worth mentioning: Whenever another Islamic terror attack takes place, we will always get various Muslim commentators pulling out one Koranic passage. Sura 5:32 says this: “…if any one killed a person, it would be as if he killed the whole of mankind; and if any one saved a life, it would be as if he saved the life of the whole of mankind…”

This is one of the most quoted Koranic verses. It is also one of the most misquoted and twisted texts. It is offered as somehow being the equivalent of the Jewish and Christian commandments about not killing, and loving your neighbour. But it is nothing of the sort. Indeed, the context makes it clear that this is about the people of Israel:

On that account: We ordained for the Children of Israel that if any one slew a person – unless it be for murder or for spreading mischief in the land – it would be as if he slew the whole people: and if any one saved a life, it would be as if he saved the life of the whole people. Then although there came to them Our apostles with clear signs, yet, even after that, many of them continued to commit excesses in the land.

One ex-Muslim, Nabeel Qureshi, says this about the text:

1 – It explicitly states that this was a commandment to the Children of Israel, i.e. the Jews! This is not a commandment to all people, and it certainly should not be misused as if this is Allah’s command to Muhammad’s people.

2 – Even if this were a command to the Muslims, there’s still an escape clause: “unless it be for murder or spreading mischief in the land.” If someone is “spreading mischief”, he can still be killed. Now let’s think for a moment. The would-be Times Square bomber considers Americans to be spreading mischief in Palestine and around the world (practically all Muslims I know think this, even the ones who are American citizens). Accordingly, even if this verse were to apply to someone like Faisal Shahzad, he would still be justified in his slaughter.

As if this weren’t obvious enough from the verse itself, the Qur’an further expounds this point in the very next verse. 5:33 says: “The punishment of those who wage war against God and His Apostle, and strive with might and main for mischief through the land is: execution, or crucifixion, or the cutting off of hands and feet from opposite sides, or exile from the land: that is their disgrace in this world, and a heavy punishment is theirs in the Hereafter.”

This verse is referring to the Muslims, not the Jews anymore, as we can tell in the shift from past tense to present tense. And here, the punishment for mischief is clearly prescribed: execution, crucifixion, mutilation, or at the least, exile. This is the command given to the Muslims. Quite clearly, it does not teach what the Muslims proclaim it teaches; in fact, it teaches almost the exact opposite.
www.answeringmuslims.com/2010/05/quran-532-nazam-and-neglecting-context.html

But I won’t hold my breath to see Western leaders joining in full solidarity with slain Christians in Sri Lanka and elsewhere. It just ain’t gonna happen. Double standards anyone? Dhimmitude in action.