By now you should have heard about the deadly Islamic attacks on churches and hotels in Sri Lanka. Mind you, the mainstream media coverage was once again rather thin, but nonetheless the Easter Sunday attacks were some of the worst in quite a while. 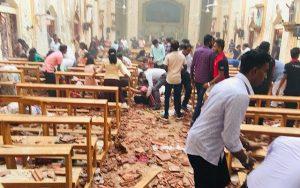 And given jihad attacks are a daily occurrence, that is saying something. As of the time of this writing, eight separate but coordinated attacks took place. Casualties are now reaching a thousand: over 200 are dead and some 500 injured. A number of the dead are foreigners.

Religious violence is not new in Sri Lanka. The religious breakdown there is as follows: 70 per cent are Buddhists; 13 per cent are Hindus; 10 per cent are Muslims; and 7 per cent are Christians. While the dust is still settling, various reports are pointing to Islamic terrorism. Says one:

Two of the six attacks that rocked Sri Lanka this morning are reportedly to have been carried out by suicide bombers. The attack at Shangri La hotel was carried out by suicide bomber Zahran Hashim, while Abu Mohammad has been identified as the attacker at the Batticalao church….
www.news18.com/news/world/sri-lanka-terror-attack-live-six-blasts-at-churches-hotels-rock-easter-sunday-24-killed-2110779.html

And another slightly earlier report:

“A foreign intelligence agency has reported that the NTJ (National Thowheeth Jama’ath) is planning to carry out suicide attacks targeting prominent churches as well as the Indian high commission in Colombo,” said the alert. NTJ is a radical Muslim group in Sri Lanka that came to notice last year when it was linked to the vandalization of Buddhist statues.
www.jihadwatch.org/2019/04/sri-lanka-foreign-intel-agency-reports-that-muslim-group-was-planning-to-target-churches-with-jihad-suicide-attacks

Again, there are no surprises here. This is Islam in action. This is the work of devout and dedicated Muslims. Slaughtering innocent Christians on their most holy day is par for the course. But the media prefers to ignore all this, or play down the real perpetrators of this violence. For example, on tonight’s television one news broadcast did not even run with the story, but it did have time to do a piece on drag queens.

Even now the media is still being coy on all this, as are plenty of clueless wonders who are also still refusing to face reality. I recently posted on the social media about the alarming rate of Muslim attacks on, and murders of, people around the world. I said this was a daily occurrence. Yet I had one person tell me it certainly could not be literally true that folks are daily being killed. I assured him that it most certainly is true.

I pointed to a 2016 article of mine in which I wrote about there being 30,000 deadly jihad attacks since 9/11. In it I offered these chilling facts and stark numbers: “Just think about the stats here: There have been 5585 days which have passed since the 9/11 attacks. That means on average every single day since then we have experienced around 5.4 jihadist attacks. Over five attacks every day for 15 years running!”
billmuehlenberg.com/2016/12/30/30000-islamic-terror-attacks/

The numbers of course are now even higher: as of today there have been 34,891 deadly Islamic terror attacks since 9/11. That occurred 6,431 days ago. So we are now averaging five and a half such attacks each day since then, It is getting worse.
www.thereligionofpeace.com/

Indeed, Christian persecution of all sorts is ratcheting up around the world. While not all of this persecution is the work of Muslims, most of it is. Yet most of the media and our world’s leaders don’t want to even discuss this. One group which monitors all this has recently released a report about it:

A new report by Open Doors has revealed the extent of Christian persecution around the world. The 2019 report reveals the number of Christians experiencing high levels of persecution reached 245 million. Its annual World Watch List details the 50 countries where persecution is at its worst.
www.christian.org.uk/news/245-million-christians-suffering-high-levels-of-persecution/

The Christian persecution we read about in Scripture and history books is not a thing of the past. It still exists. Today, in the 21st century, we are living in a time when persecution against Christian believers is the highest in modern history. According to Open Doors’ 2019 World Watch List—an in-depth investigative report focusing on global Christian persecution—persecution is increasing at an alarming rate. Research for the List indicates that each day, a staggering 11 Christians are killed for their faith in the top 50 countries ranked on the World Watch List.
www.opendoorsusa.org/christian-persecution/stories/11-christians-killed-every-day-for-their-decision-to-follow-jesus/?fbclid=IwAR1qwgkySNLd_KDHj9mmAuZWFUPNQv-Bf-5RT_Bo9glku-VHsdXro8iHD1k

A quick look at their World Watch Map shows how much of this persecution is taking place in Muslim countries: www.opendoors.org.au/persecuted-christians/world-watch-list/

Thankfully some politicians are highlighting these grim facts. One English parliamentarian for example can be mentioned here:

Foreign secretary Jeremy Hunt has used an Easter message to express his solidarity with millions of Christians worldwide suffering for their faith. Mr Hunt spoke of his commitment to promoting religious freedom around the world in 40 Lent letters sent out to Christians who have experienced persecution. The first letter was sent to Open Doors founder Brother Andrew. In it, Mr Hunt said it was his “honour” to send the first letter to Brother Andrew, a missionary from the Netherlands who used to smuggle Bibles behind the Iron Curtain.

Mr Hunt praised his “extraordinary and courageous support” for the persecuted church as he recalled reading about Brother Andrew’s story as a child in the book, “God’s Smuggler”. “As a man of faith, free to practise in line with my conscience, I am appalled at the plight of the 245 million Christians worldwide currently facing persecution as a result of their belief,” he said.
www.christiantoday.com/article/jeremy-hunt-appalled-by-suffering-of-245-million-christians-persecuted-for-their-faith/132256.htm?fbclid=IwAR0BYEdXf7tcJTHEzzl_Bta74AlGFpt715AlXVzvmC-DBxaYFAQ765H2ZdE

And with the leftist media still living in denial about all these facts – especially after the Christchurch killings – another report helps to put things in perspective:

Aid to the Church in Need, in its latest “Religious Freedom Report”, warned that 300 million Christians, overwhelmingly in the majority-Muslim countries, were subjected to violence, making it “the most persecuted religion in the world.” This makes the odds of a Christian in a majority-Muslim country being murdered by a Muslim – simply for being what he is – approximately one in 70,000. Which means that a Christian living in a majority Muslim country is 143 times more likely to be killed by a Muslim for being a Christian than a Muslim is likely to be killed by a non-Muslim in a Western country for being what he is.
voiceofeurope.com/2019/03/christians-living-in-a-muslim-country-143-times-more-likely-to-be-killed-by-a-muslim-than-vice-versa/

And to share all these gruesome facts is not to claim that only Christians are being slaughtered by the jihadists. Yes, plenty of Muslims are also the victims of Islamic terrorism. Nonetheless, Christians continue to make up a big percentage of their bloodletting.

But let me return to Sri Lanka. Right now there are countless grieving friends and family members of all the victims. We so very much need to lift them up in prayer at this moment. Easter commemorates a time when the forces of darkness sought to do their best to quench the light.

They failed miserably, with an empty grave validating the life and teachings of Jesus Christ. What looked like the triumph of evil proved to be nothing of the sort. Diabolical terrorists may have killed and wounded many this Easter Sunday, but they do not have the last word.

As I penned in an Easter meditation earlier today,

And we also know that one day Christ will return and he will put all his enemies under his feet (Psalm 110:1 – quoted often in the New Testament). Earthly kingdoms will be no more but his eternal Kingdom will remain. As we read in Revelation 11:15, “Then the seventh angel sounded: And there were loud voices in heaven, saying, ‘The kingdoms of this world have become the kingdoms of our Lord and of His Christ, and He shall reign forever and ever!’”
billmuehlenberg.com/2019/04/21/easter-and-the-nations-he-shall-put-everything-under-his-feet/

Until then we know that Satan and his minions will keep hating on God and his people. By his grace we will continue to stand strong, regardless of the relentless persecution.