We rightly celebrate Easter this time of year as we think of the wonderful exchange that took place at Calvary: our sins and impurity for his forgiveness and righteousness. New life in Christ is at the heart of the Easter message. But there is more to it than that. Entire cultures and nations have been and will be impacted by what occurred 2000 years ago.

Consider this: In today’s culture of relativism, subjectivism, and the rejection of truth, to say you believe in this religion or that spirituality is no biggee, as long as you do not absolutise your faith. You have your beliefs, others have their beliefs, and it’s all good. 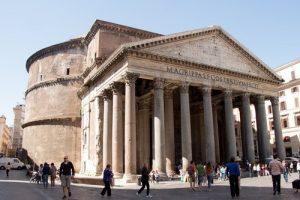 Trouble only arises when some arrogant and narrow-minded bigot comes along and claims that his particular belief system is true, and all others are false. Now them’s fightin’ words. Our culture will NOT tolerate those sorts of folks who hold to such exclusive truth claims.

That is why Christians have such a hard time today simply trying to share long-standing biblical verities. To say that marriage is between a man and a woman, or to say that Jesus is the only way that people can get right with God, IS offensive. These things sound SO intolerant and judgmental and bigoted.

But we can learn from history here. Things were actually not all that different for the early church. The pagan rulers of the day were quite happy to run with many gods – as long as none was preeminent, and as long as they – the rulers – got their fair share of praise and adoration.

We see all this perfectly reflected in the Pantheon, a Roman temple dedicated to all the gods of pagan Rome. The word itself means “all gods” in Greek, and it was first built in 27 B. C. But it was destroyed by fire in 80 A. D., so it was rebuilt in 120 A. D.

The strategy of the Romans was not to pit one god against another, but to bring them all into one happy and syncretistic family. When an area was conquered by the Romans, their local gods were not destroyed or outlawed – they were simply added to all the other gods in the Pantheon!

This was a pretty good strategy to keep most folks happy and subject to Roman rule. Of course the monotheistic Jews were not as thrilled about this, nor were the early Christians who declared Jesus to be Lord and Saviour, and no one else. Now that made for some real trouble.

Roman rulers were also known to take for themselves the titles of Lord and Saviour – at least later on. Here then we had a major conflict, and the Roman government could not tolerate these new upstarts. That explains in good measure all the persecution they had to endure in the first several centuries of the church.

Sinclair Ferguson in his new, brief work on church history (In the Year of Our Lord) explains what was happening back then:

It is particularly significant for us today to realize what these early Christians were doing. They were not being asked to say that Caesar is the only lord, only that Jesus is not the only Lord. Roman religion was polytheistic. It recognized all kinds of gods, including Caesar. It was therefore not a problem for the state if a person believed in a wide variety of gods, each appropriate to his personal activities – so long as he also swore loyalty to the emperor and the empire by saying “Caesar is Lord.” Even to say “Yahweh is Lord” could be tolerated (was He not, after all, simply another local god – the God of the Jews?).

But Jesus was different. He had appeared on the scene of history and had “suffered under Pontius Pilate” – a Roman governor. He was not a remote God but a historical figure – as real, and recent, as Claudius Caesar himself. It was clear that His lordship could not be confessed alongside that of other lords, for when Christians said, “Jesus is Lord,” they clearly meant that He alone and no other is Lord. Therein lay the grounds for faithful Christians to be accused of, and tried for, the capital offence of treason.

Yep, and Christians today in the West are increasingly being seen in the exact same light: treasonous troublemakers who must learn to ease up with their grand and exclusive truth claims and submit, or face the consequences. But just as Christians could not submit 2000 years ago, neither can they do so today.

In an article I wrote yesterday I quoted from missiologist Lesslie Newbigin’s important 1986 book, Foolishness to the Greeks. In it he quoted from English statesman W. E. Gladstone’s 1841 book, The State in Its Relations with the Church. Let me share that here:

Rome, the mistress of state-craft, and beyond all other nations in the politic employment of religion, added without stint or scruple to her list of gods and goddesses, and consolidated her military empire by a skilful medley of all the religions of the world.

Thus it continued while the worship of the Deity was but a conjecture or a contrivance; but when the rising of the Sun of Righteousness had given reality to the subjective forms of faith, had made actual and solid truth the common inheritance of all men, then the religion of Christ became, unlike other new creeds, an object of jealousy and of cruel persecution, because it would not consent to become a partner in this heterogeneous device, and planted itself upon truth, and not in the quicksand of opinion. . . . [S]hould the Christian faith ever become but one among many co-equal pensioners of a government, it will be a proof that subjective religion has again lost its God-given hold upon objective reality; or when, under the thin shelter of its name, a multitude of discordant schemes shall have been placed upon a footing of essential parity, and shall together receive the bounty of the legislature, this will prove that we are once more in a transition state — that we are traveling back again from the region to which the gospel brought us, towards that in which it found us.

Newbigin comments on this topic as follows:

Thus the earliest church never availed itself of the protection it could have had under Roman law as a cultus privatus dedicated to the pursuit of a purely personal and spiritual salvation for its members. Such private religion flourished as vigorously in the world of the Eastern Mediterranean as it does in North America today. It was permitted by the imperial authorities for the same reason that its counterparts are permitted today: it did not challenge the political order. Why, then, did the church refuse this protection? Why did it have to engage in a battle to the death with the imperial powers? Because, true to its roots in the Old Testament, it could not accept relegation to a private sphere of purely inward and personal religion. It knew itself to be the bearer of the promise of the reign of Yahweh over all nations. It refused the names by which the many religious societies called themselves, and which critics such as Celsus applied to the church; it called itself the ecclesia tou theou, the public assembly to which God is calling all men everywhere without distinction. This made a collision with the imperial power inevitable – as inevitable as the Cross.

Yes and that is always the case with true followers of Jesus Christ. Because he alone is Lord, the true disciple can never bow down to any false god or religion or ideology or political system. His loyalty and devotion are exclusively to Christ alone.

That is what makes the believer so dangerous to the state and the culture of tolerance and relativism. We ARE the main threat to all they hold dear. We are subversives and radicals who MUST be contained and restrained lest we help bring down the entire ungodly system.

That my friends is why genuine Christ-followers were so dangerous and subversive 2000 years ago, and why they still are today. Therefore we should not be surprised at all the hatred and vilification we receive at the hands of the state, the surrounding culture, the world – and even our friends and family.

But this will not always be the case. Because of what Jesus started two millennia ago, such Christophobia will not always be with us. Indeed, as I write this, it is Easter Sunday. What we celebrate today would not have been imaginable 2000 years ago.

Back then the Romans thought they had finally gotten rid of this annoying pest Jesus. They crucified the rabble rouser and trouble maker. ‘Finally, we can get back to business,’ they thought. But of course they did NOT count on him being the REAL Lord and Saviour, and actually rising from the grave.

That simple fact of history helped to eventually bring about the end of the mighty Roman Empire – among other things. Indeed, consider what eventually happened to the Pantheon itself. It did not long last as a pagan temple devoted to all the various gods of Rome.

Recall that the Emperor Constantine embraced Christianity and in 381 A. D. he made Christianity the state religion of Roman Empire. And in 608 A. D. the Pantheon itself was converted into a Christian church. How things have changed! The Roman Empire is no more but Christianity continues strong, 2000 years on.

And we also know that one day Christ will return and he will put all his enemies under his feet (Psalm 110:1 – quoted often in the New Testament). Earthly kingdoms will be no more but his eternal Kingdom will remain. As we read in Revelation 11:15, “Then the seventh angel sounded: And there were loud voices in heaven, saying, ‘The kingdoms of this world have become the kingdoms of our Lord and of His Christ, and He shall reign forever and ever!’”

Amen and hallelujah. This is a major part of the glorious message of Easter.

5 Replies to “Easter and the Nations: ‘He Shall Put Everything Under His Feet’”