This is another one of those passages which can so easily be misused and abused by some folks. It has to do with the preaching of the gospel, and those who do it with bad motives and the like. But even though this is happening, the Apostle Paul still rejoices that the gospel is being proclaimed. The passage is this:

It is true that some preach Christ out of envy and rivalry, but others out of goodwill. The latter do so out of love, knowing that I am put here for the defense of the gospel. The former preach Christ out of selfish ambition, not sincerely, supposing that they can stir up trouble for me while I am in chains. But what does it matter? The important thing is that in every way, whether from false motives or true, Christ is preached. And because of this I rejoice. Yes, and I will continue to rejoice. 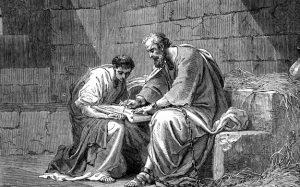 Let’s look at these words in more detail. By way of background, Paul was likely writing this letter while imprisoned in Rome (perhaps around 62 A. D.). As the verses quoted above demonstrate, there was disunity within the Philippian church.

Among other things, there seem to have been pro-Paul groups and anti-Paul groups. Divisions within the church were nothing new for Paul. He had dealt with that problem in 1 Corinthians for example years earlier. There are always factions and sides that tend to compete with each other. Markus Bockmuehl speaks to these issues of division and mixed motivations:

The nature and purpose of Paul’s confinement have genuinely strengthened many believers in the task of evangelism, the majority being motivated by love and good will. Others, however, smell an opportunity for self-advancement, even at the expense of causing the captive Paul distress (v. 17). The divisions in the Roman house churches are already evident in Paul’s letter to Rome several years earlier (eg., Rom. 14:1-15:6), and competing interests are clearly still at work.

We are not told who exactly these divisive and antagonistic people are, and why they had these bad and unhelpful motivations. But some of the believers there clearly did not like Paul and wanted to cause even more trouble for him. F. F. Bruce reminds us that this is not so surprising:

If we find it difficult to credit that followers of Christ could actually find satisfaction in thus rubbing salt into Paul’s wounds, it may be because we fail to realize how controversial a figure Paul was, even within the Christian fellowship, and how deep and bitter was the opposition maintained by some to his gospel interpretation and missionary policy.

Peter O’Brien does look at some options as to their identity, and then concludes that the opposition to Paul was “due to personal animosity and rivalry. His coming to Rome had worked for the advance of the gospel in the city, but there were differences of outlook among the various groups of Christians who were antipathetic to Paul.”

So the Apostle had to put up with this kind of behaviour. However, if the gospel was being proclaimed, then he could still rejoice. But as mentioned, this text can be misused by some. One has to walk carefully here: Paul is happy that the gospel is preached, even by his opponents and those with lousy motives.

But elsewhere of course he speaks about how unhappy he is when a false gospel or a distorted gospel is being preached. So care is needed in how we run with Paul’s words. It seems that these enemies of Paul were still preaching a more or less sound gospel.

This was not the case with the Galatians for example, and Paul had to rebuke the false teachers there very strongly indeed (see Gal. 1:6-10). And in 2 Corinthians Paul had to warn about the great dangers of another gospel and another Christ being proclaimed (2 Cor. 11:4). Whenever the truth of the gospel is at risk, Paul does not just sit back and allow it to do its damage.

So here Paul seems assured that a false gospel is not being proclaimed, so he is willing to put up with the abuse and discord. At least the gospel is being preached. But this does not mean motivations therefore mean nothing to Paul. As Frank Thielman comments:

“That the motives and style of those who proclaim the gospel are not a matter of indifference to Paul is clear from his other letters. In 1 Thessalonians 2:1–12 Paul explains at length that his own motives in preaching to the Thessalonians were pure, not motivated by flattery or greed.”

He looks at other texts where Paul speaks of the importance of motivation, then goes on to explain the apparent contradiction with what is found here:

The answer to this puzzle lies in the difference in the circumstances that Paul confronts in Philippians and in other letters where he discusses the importance of motives in preaching. In the other letters Paul was speaking directly to the people who might be convinced that his motives were impure or who had fallen under the spell of those whose motives were impure. This letter, on the other hand, is addressed neither to Paul’s rivals nor to people who have fallen under their influence.

What we have here is a clear look at Paul’s heart – of his Christ-centred attitude. He could so easily have become bitter and angry. After all, here he was, languishing in prison, and some of his fellow believers were seeking to add insult to injury. But he did not respond that way. As D. A. Carson writes:

How does Paul handle this? Is he wounded? Doubtless he has feelings like everyone else. But he is a man of deep principle, and he perceives that whether by preachers like this or by preachers who align themselves with the apostle, the gospel is getting out – and that is more important than whether or not he himself achieves universal respect in the church….

Amen. The Apostle above all demonstrates his love of Christ and his love of the gospel, And he also shows us in this passage his largeness of heart. As Gordon Fee explains:

True, he lacks the kind of “largeness” for which religious pluralists contend. Is that because such pluralists have not been apprehended by Christ and the gospel, as God’s thing – his only thing – on behalf of our fallen world? Unfortunately, and ironically, such pluralism often has very little tolerance for the Pauls of this world! But in Paul’s case it is his theological convictions that lead both to his theological narrowness, on the one hand, and to his large-heartedness within those convictions, on the other – precisely because he recognizes the gospel for what it is: God’s thing, not his own. And that, it should be added, also stands quite over against many others who think of themselves as in Paul’s train but whose passion for the gospel seems all too often a passion for their own “correct” view of things.

At stake for the Philippians – and for us, I would venture – is the admonition finally made explicit in 4:9: to put into practice for ourselves what we hear and see in Paul, as well as what we have learned and received by way of his teaching.

Yes, seeking to get Paul’s heart here is crucial. On the one hand, too many believers often lack his humility and willingness to be abased. They refuse to play second fiddle to anyone, and always seek to get credit for everything. They lack the humbleness and love of Paul.

But on the other hand, there are too many believers who think the gospel does not matter, and we should just go with the flow. Paul would have none of that either. When the gospel was at risk, he spoke fearlessly and forcefully. He would not tolerate false gospels or false teachers.

So we need to find this biblical balance. Paul is so well worth emulating in this regard. Do we put the gospel first, or do we worry about our own reputation? Is Christ paramount, or how people treat us? We all must ask ourselves these questions, and on a regular basis.