On who? Hermeneutics is simply the practice or discipline of interpretation. Biblical hermeneutics – which is what I discuss here – is about the basic principles of biblical interpretation. In one sense the Bible is like any other book, and certain core interpretive guidelines must be adhered to.

Of course it is more than just a human book – it is also a divine book. So spiritual assistance is needed as well as we read the Word of God. But reliance on the Holy Spirit does NOT mean we can throw out our brains and refuse to make use of basic hermeneutics. We must do both. 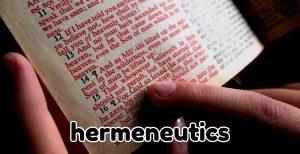 In fact we find the importance of teaching and gaining a proper understanding of God’s words mentioned within Scripture itself. In the Old Testament for example we find this in Nehemiah 8:7-12:

The Levites–Jeshua, Bani, Sherebiah, Jamin, Akkub, Shabbethai, Hodiah, Maaseiah, Kelita, Azariah, Jozabad, Hanan and Pelaiah–instructed the people in the Law while the people were standing there. They read from the Book of the Law of God, making it clear and giving the meaning so that the people could understand what was being read.

Then Nehemiah the governor, Ezra the priest and scribe, and the Levites who were instructing the people said to them all, “This day is sacred to the LORD your God. Do not mourn or weep.” For all the people had been weeping as they listened to the words of the Law.

Nehemiah said, “Go and enjoy choice food and sweet drinks, and send some to those who have nothing prepared. This day is sacred to our Lord. Do not grieve, for the joy of the LORD is your strength.” The Levites calmed all the people, saying, “Be still, for this is a sacred day. Do not grieve.” Then all the people went away to eat and drink, to send portions of food and to celebrate with great joy, because they now understood the words that had been made known to them.

We find similar things in the New Testament, as in Acts 8:30-31: Then Philip ran up to the chariot and heard the man reading Isaiah the prophet. “Do you understand what you are reading?” Philip asked. “How can I,” he said, “unless someone explains it to me?” So he invited Philip to come up and sit with him.

And the term itself is found in various places in the Greek New Testament. The noun form, hermeneia, is found here:

Luke 24:27 And beginning with Moses and all the Prophets, he explained to them what was said in all the Scriptures concerning himself.
John 1:38 Turning around, Jesus saw them following and asked, “What do you want?” They said, “Rabbi” (which means Teacher), “where are you staying?” John 1:42 And he brought him to Jesus. Jesus looked at him and said, “You are Simon son of John. You will be called Cephas” (which, when translated, is Peter).
John 9:7 “Go,” he told him, “wash in the Pool of Siloam” (this word means Sent). So the man went and washed, and came home seeing.
Hebrews 7:2 and Abraham gave him a tenth of everything. First, his name means “king of righteousness”; then also, “king of Salem” means “king of peace.”

Finally, some of you might recall your Greek and Roman mythology. Hermes was the Greek messenger god (Mercury, the Roman). He was the spokesman or interpreter for the other gods. Thus we find the word used in Acts 14:12: “Barnabas they called Zeus, and Paul they called Hermes because he was the chief speaker.”

The importance of hermeneutics

How many times have you heard somebody say. “Well, that’s just your interpretation”? Well, the truth is, yes we all have our own interpretations – but some interpretations are clearly better than others. Good hermeneutics can help us avoid many errors and pitfalls as we seek to understand God’s Word.

In a fallen world none of us have all the truth, and we all can have faulty understanding. That is why two spirit-filled Christians can come up with radically different interpretations of the same passage. Adhering to some basic hermeneutical principles can help us in this area.

Hermeneutics is important as it helps us to rightly understand God’s word. The aim of good interpretation is to help us get the plain meaning of the text. Scripture itself tells us of how vital this is:

Acts 17:11 Now the Bereans were of more noble character than the Thessalonians, for they received the message with great eagerness and examined the Scriptures every day to see if what Paul said was true.
1 Timothy 4:16 Watch your life and doctrine closely. Persevere in them, because if you do, you will save both yourself and your hearers.
2 Timothy 2:15 Do your best to present yourself to God as one approved, a workman who does not need to be ashamed and who correctly handles the word of truth.
2 Timothy 3:16-17 All Scripture is God-breathed and is useful for teaching, rebuking, correcting and training in righteousness, so that the man of God may be thoroughly equipped for every good work.

Human language is largely equivocal, that is, capable of being understood in more than one way. The potential for misunderstanding is almost always there. As any husband or wife knows, the ability to misunderstand and mis-communicate is all too easy. So making sure we rightly understand what the Bible is saying is crucial.

Proper understanding of the text will take various things into consideration, such as language, history and culture. As to the last one, there is much found in Scripture that seems foreign to our culture. What does David mean for example in Ps. 51:7: “Cleanse me with hyssop, and I will be clean”?

We will not properly understand the meaning if we do not know what hyssop is. Hyssop was a small plant found in the Ancient Near East that was used in the sacrifices of temple worship. It served as a brush to sprinkle blood on the worshippers. Thus it spoke of sacrifice and the atonement of sin.

Hermeneutics also helps us to avoid bad and destructive readings of Scripture. The cults for example especially twist the scriptures. As Paul says in 2 Corinthians 4:2, “Rather, we have renounced secret and shameful ways; we do not use deception, nor do we distort the word of God. On the contrary, by setting forth the truth plainly we commend ourselves to every man’s conscience in the sight of God.”

Or as Peter put it in 2 Peter 3:16, “He writes the same way in all his letters, speaking in them of these matters. His letters contain some things that are hard to understand, which ignorant and unstable people distort, as they do the other Scriptures, to their own destruction.”

Satan of course likes to twist scripture, or get us to misapply it: As we read in Luke 4:9-12:

The devil led him to Jerusalem and had him stand on the highest point of the temple. “If you are the Son of God,” he said, “throw yourself down from here. For it is written: “He will command his angels concerning you to guard you carefully; they will lift you up in their hands, so that you will not strike your foot against a stone.” Jesus answered, “It says: ‘Do not put the Lord your God to the test’.”

Satan was (mis)quoting Psalm 91:11-12: “For he will command his angels concerning you to guard you in all your ways; they will lift you up in their hands, so that you will not strike your foot against a stone.” In his reply Jesus quoted Deuteronomy 6:16: “Do not test the LORD your God as you did at Massah.”

There are plenty of examples of bad interpretation, whether by cultists or others. For example, some folks will latch onto Mark 16:17-18 and spend much of their time playing with snakes in church services! Needless to say, some of these folks who have zero interpretative skills have died because of their snake handling. See here for more on this: billmuehlenberg.com/2012/06/02/difficult-bible-passages-mark-1617-18/

Or consider another text which has also resulted in fully unnecessary deaths: Acts 15:20. This verse speaks about not eating blood, but cults like the Jehovah’s Witnesses twist this to mean that they cannot have blood transfusions! Once again, because of lousy hermeneutics, people have died as a result. I did a whole piece on this as well: billmuehlenberg.com/2015/04/09/hermeneutics-and-blood-transfusions/

There are so many other examples of the poor handling of Scripture because of the inability or unwillingness to apply basic principles of hermeneutics. Again, the cults specialise in this, but far too many other Christians can be guilty of this as well. It is so very vital that we do all we can to correctly handle the word of truth.

Future articles in this irregular series will look at other hermeneutical issues, including basic rules of biblical interpretation. So stay tuned.

5 Replies to “On Hermeneutics”