Let me begin with a few prefatory remarks. This is just an overview of one Christian issue which Christians can well differ on. I happen to have a point of view on this, but I realise that there is some room to move here. Also, some folks will say this is just theological overkill: ‘Stop, my head hurts! There is too much deep stuff here – too many names and terms and concepts that I know nothing about!’

But others will complain that this is far too simplistic and brief, and that I did not accurately represent everybody and everything. Well, I do want Christians to be stretched a bit and learn new things. And I am not writing a PhD thesis on this. I am aiming at a rather general audience.

And whenever I do a piece like this, some theologically-minded folks can get upset, and will come here with all guns blazing. But as I say, there are various views on this. Those who are easily triggered, or think that only their particular pet view is the right one are advised to perhaps vent somewhere else. 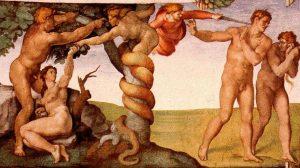 Moreover, the biblical notion of the Fall is crucial here as well. This explains how sin entered the world. I have dealt with that in an earlier piece: billmuehlenberg.com/2018/10/10/the-vital-importance-of-the-biblical-doctrine-of-the-fall/

But more needs to be said about this. All biblical Christians of course have to embrace the notion and reality of sin. But like all biblical truths, there can be some real complexities here. For example, one key component of our discussion of sin is what theologians refer to as the doctrine of original sin.

Briefly put, it states that because of the Fall (what happened when our first parents disobeyed God), sin has pervaded or filtered through to all of us. We are all born into the world in a fallen, sinful condition. We are not born neutral, or with a spiritual blank slate, but we enter the world with a sinful nature.

Suffice it to say that while all Christians believe in – or should believe in – the concept of sin, not all believe in the concept of original sin. While it tends to have been a mainstream position in the church throughout the ages, some theological traditions embrace it more than others.

Catholics and Protestants have basically run with this view, while those in the Orthodox churches have been less keen on it. And it would be an integral part of Reformed thought for example, but somewhat less so in various Arminian circles.

Let me first seek to lay out the biblical case for it. One way to do this is to simply look at the passages that seem to speak to the fact that not only are we all sinners, but that we seem to be born that way. Some texts that appear to quite clearly indicate that we are sinful from birth, and that Adam’s sin has affected us all, include:

Psalm 51:5 Surely I was sinful at birth, sinful from the time my mother conceived me.

Psalm 58:3 Even from birth the wicked go astray; from the womb they are wayward and speak lies.

1 Corinthians 15:21-22 For since death came through a man, the resurrection of the dead comes also through a man. For as in Adam all die, so in Christ all will be made alive.

Ephesians 2:1-3 As for you, you were dead in your transgressions and sins, in which you used to live when you followed the ways of this world and of the ruler of the kingdom of the air, the spirit who is now at work in those who are disobedient. All of us also lived among them at one time, gratifying the cravings of our flesh and following its desires and thoughts. Like the rest, we were by nature deserving of wrath.

And other texts that offer at least tentative support for these ideas would include:

Genesis 8:21 the intention of man’s heart is evil from his youth

Psalm 14:2-3 The Lord looks down from heaven on the children of man,
to see if there are any who understand,
who seek after God.
They have all turned aside; together they have become corrupt;
there is none who does good,
not even one.

Proverbs 22:15 Folly is bound up in the heart of a child,
but the rod of discipline drives it far from him.

Jeremiah 17:9 The heart is deceitful above all things,
and desperately sick;
who can understand it?

John 6:44 No one can come to me unless the Father who sent me draws him. And I will raise him up on the last day.

Many more such texts could be offered here. And as can be seen from some of these verses, the debate is much bigger than simply how we understand sin and the human condition. It also has major implications for how we understand the nature of salvation. That further discussion about how we are saved however would need to be addressed in further articles.

But there is one other major text that really seems to make this teaching quite clear: Romans 5:12-21. It says:

Therefore, just as sin entered the world through one man, and death through sin, and in this way death came to all men, because all sinned–for before the law was given, sin was in the world. But sin is not taken into account when there is no law. Nevertheless, death reigned from the time of Adam to the time of Moses, even over those who did not sin by breaking a command, as did Adam, who was a pattern of the one to come. But the gift is not like the trespass. For if the many died by the trespass of the one man, how much more did God’s grace and the gift that came by the grace of the one man, Jesus Christ, overflow to the many! Again, the gift of God is not like the result of the one man’s sin: The judgment followed one sin and brought condemnation, but the gift followed many trespasses and brought justification. For if, by the trespass of the one man, death reigned through that one man, how much more will those who receive God’s abundant provision of grace and of the gift of righteousness reign in life through the one man, Jesus Christ. Consequently, just as the result of one trespass was condemnation for all men, so also the result of one act of righteousness was justification that brings life for all men. For just as through the disobedience of the one man the many were made sinners, so also through the obedience of the one man the many will be made righteous. The law was added so that the trespass might increase. But where sin increased, grace increased all the more, so that, just as sin reigned in death, so also grace might reign through righteousness to bring eternal life through Jesus Christ our Lord.

Or as Benjamin Harris’ 1690 New England Primer simply put it, “in Adam’s fall we sinned all.” The idea is that since the fall of Adam, we all inherit a sinful nature. The passage teaches that there are two humanities or communities:
– one is characterised by disobedience, sin and guilt
– the other is characterised by obedience, grace and faith

Since we are all in Adam, we all sin and we all die. But only those who are in Christ find forgiveness for their sins and newness of life. I could easily spend the rest of this article discussing this passage at length. But let me offer a closing quote on it before moving on.

I could have drawn from any one of the 35 or so commentaries I have on Romans, but let me just make use of one relatively recent one: that by Michael Bird in The Story of God Bible Commentary series. He says this about the passage, bringing it down to earth:

Romans 5:12-21 tells us quite a lot about sin. The doctrine of “original sin” or “original guilt,” whichever you prefer, gets a lot of criticism from atheists, liberal theologians, and postmodern intellectuals for all sorts of reasons….

All people sin. All people imitate sin. All people have a propensity to sin. All people are habitually addicted to sin. All people are guilty of sin. That human beings sin, transgress, break laws, violate rights, and commit immoral deeds is self-evident to everyone. I have to confess that one of the things that amazed me as a parent was that I never had to teach my children how to lie. They picked it up quite naturally. The mess that one child makes he or she will instinctively blame on another child, preferably the younger one, who cannot yet speak for themselves. Greed, violence, and selfishness seem like the default setting that they are born with. I sincerely believe that crying babies would throw their own mothers under a truck if it would get them what they want.

In sum, this is just some of the biblical material that can be assessed on this topic. And we have various theological and historical concerns that also must be brought into this discussion. So Part Two of this article will look at those matters in more detail: billmuehlenberg.com/2019/07/18/on-original-sin-part-two/

4 Replies to “On Original Sin – Part One”