I just came upon some inspiring Christian song writers/singers who really seem to put Christ first.

OK, I make no claims to knowing much about contemporary Christian music. In fact, I know almost nothing about it. What I do know is mostly from when I was a young Christian. Back then I followed the scene somewhat, so I knew about – and had records by – people like Phil Keaggy, Keith Green, Love Song, Andrae Crouch and the Disciples, Randy Stonehill, Larry Norman, John and Terry Talbot, 2nd Chapter of Acts, Lamb, and so on.

But since then I have followed very little of what is happening in contemporary Christian music. That shows on this website: I have penned only a few pieces on the more recent Christian singers and songwriters. One of them was on Rebecca St. James – at least in part: billmuehlenberg.com/2011/12/20/tim-tebow-rebecca-st-james-and-public-faith/ 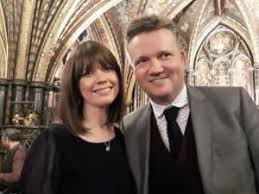 So I am probably the last person you want to turn to if you want to know all the latest on what is happening with Christian music today. ‘OK Bill, so why then are you writing this piece if that is the case?’ Good question – I am glad you asked.

I do it mainly for one reason: just an hour ago I stumbled upon a Christian artist – or rather, a Christian couple – that seems quite impressive. And by impressive I mean they do not seem caught up in the spotlight, in trying to be cool and hip, in just offering entertainment, and simply slavishly following the world. They seem quite devout and dedicated to Christ.

Moreover, their lyrics seem to be fully biblical and theologically rigorous – unlike the great bulk of Christian music today. They stick to Scripture, and are not just offering brainless, repetitive choruses. I had never heard of them before so I did a bit of net surfing after I came across one of their songs.

I refer to north Irish Christian song writers and singers – and husband and wife team – Keith and Kristyn Getty. My discovery came about as follows: I actually have been writing several articles on the cross of Christ of late, and in doing so I came upon one of their songs just recently.

It is called The Power of the Cross, and it seems pretty biblical and sound. You can see/hear it performed here: www.youtube.com/watch?v=ubGCISQQ7Zo

And the same song with lyrics included is found here: www.youtube.com/watch?v=uS7fc7VTJZs

Here are some other songs I have discovered from the pair. This one I of course have heard often before, but knew nothing about who wrote it or who sang it. “In Christ Alone” will be quite well known to many of you: www.youtube.com/watch?v=qLy8ksqGf9w

Here are four more I came upon:

“The Lord Is My Salvation” www.youtube.com/watch?v=NjOGX5zT8KU

“He Will Hold Me Fast” www.youtube.com/watch?v=936BapRFHaQ

But it is not enough just to hear a few songs. A bit more sniffing around on the net and I came across this piece which offers some helpful information about the couple. The headline of the article certainly got me interested: “Hymn writer Keith Getty: Nominal, shallow Christianity has no future, we must proclaim that Jesus Christ is Lord”. Let me quote parts of it here:

The first hymn writer to be honoured by the Queen for contemporary Christian music has described how his music is an expression of one thing – that Jesus Christ is Lord. Keith Getty, awarded OBE in the annual Queen’s Birthday Honours, told Christian Today that at the heart of all his remarkable hymns, which are among the most popular modern worship hymns ever written, is the conviction that we are all fearfully and wonderfully made – and that music is an expression of that. ‘But even more than that – that it points ultimately to Christ – that even the rocks and the hills could cry out that Jesus is Lord,’ he says.

Every new song or production or company or idea is aimed at drawing people towards Christ. ‘We live in what John Stott described as the most exciting generation in history to be Christians, with the growth of Christianity around the world, the potential of the Bible in every language but, to quote Dickens, it is the “best and the worst of times”. The challenges are so great that I don’t believe nominal or shallow Christianity has any realistic future.’

‘We need to build believers, churches and children who are deep believers and part of how that happens is through the songs we sing. May all of us work together to share in that vision.’ The OBE was awarded in recognition of Getty’s contribution to music and hymn writing through his re- popularising of hymns. It is the first such honour given to an individual who is actively involved in the world of contemporary Church music.

Getty’s hymns, often written in collaboration with Stuart Townend, include the popular In Christ Alone – the number one most-frequently-sung in UK churches for a record-setting nine consecutive years. An estimated 40-50 million people sing Getty hymns in church services each year. Getty, raised in Northern Ireland, told Christian Today: ‘I was introduced to faith and music by my parents and started to get involved while at our local church, Elmwood Presbyterian in Lisburn outside of Belfast.’

It grew from there – the music groups at his church grew to attract others from other areas. His parents had an open house for everyone and over time they created their New Irish Arts organisation, involving hundreds of people from throughout Ireland in music and particularly church music. Although he’s not now involved personally, it is still flourishing under the leadership of Jonathan Rea and regarded as a great example of how the arts can shape lives and communities.

Getty has always written music but it was meeting Stuart Townend that changed his life. ‘He is just an unparalleled talent and really helped me shape and focus my writing through some pretty tough love and critique. Our first song was “In Christ Alone” and that really opened the doors for an interest and revival in hymn writing.’ Getty became a Christian as a child. ‘Key to everything were great older Christians and having great older heroes.

‘As I grew up those guiding stars continued to be an extraordinary help in everything we did. I think older Christians we can look up to is so crucial and vice versa – the responsibility to be encouraging the next generation in deep faith is profound.’ Along with Stuart, his wife Kristyn is integral to the creative process. ‘I’ve never been that good at creativity by myself and whether it’s Stuart or Kristyn or Fionan who helped create the “Irish Christmas” show, I have always leaned heavily on others.

‘Kristyn however has been the most influential person in my life – I often get asked, “Who is the most influential theologian?” or “Who are your closest confidants?” and Kristyn is the answer to all those questions. Even when I’ve heard a profound sermon, or read a deep book she actually shapes how I distill, practise and really adopt ideas and patterns at a daily level.

You can read the entire article here: www.christiantoday.com/article/hymn-writer-keith-getty-nominal-shallow-christianity-has-no-future-we-must-proclaim-that-jesus-christ-is-lord/110093.htm

Let me close by saying two things. One, I am sure there are other great singers and song writers who are sold out to the Lord, who are not ego-tripping, who are biblically and theologically sound, and who do all they can to glorify Christ alone, and not themselves.

But as I say, I really am not up on the contemporary scene today. So some of you who are can certainly come here and post comments, informing me of some of these other Christian artists that we can safely run with. It will be good to know of those who really do lift up Christ alone as they remain in the background, humble and unobtrusive.

Two, I have now known about Keith and Kristyn Getty for a full one and a half hours! In other words, I still know next to nothing about them, except for what I have offered above. My fear is that in my excitement and haste in my discovery of them and sharing this here, some unknown fact will come to light – or someone will inform me of such facts.

That is, maybe they will turn out to be part of some cult, or be pushing some unchristian agendas, like homosexual marriage or abortion. I hope not, and from the little I have read and heard, they don’t seem like the kind of folks who will let me down big time in this regard.

But again, many of my readers will know a whole lot more about them than I do, so again, you are invited to come here and share any thoughts: either affirming that they are the real deal, or that they may have some unwelcome beliefs or practices that I need to know about. So keep me posted thanks.

In the meantime, enjoy their edifying and soundly Scriptural music.

38 Replies to “Contemporary Christian Music Worth Running With”