This older book on renewal and reformation is still well worth reading:

My title might have a nice ring to it, but believers who have been around for a while will recall seeing it elsewhere. Forty years ago a very important book with this as its title appeared by American church historian Richard F. Lovelace.

I first got my copy of Dynamics of Spiritual Life (IVP, 1979), around a year after it was published. I was in Europe at the time with a missionary group, Youth With a Mission. Many of the leaders were quite interested in the book when it appeared, and rightly so. It has had a great impact on so many believers for so many years. 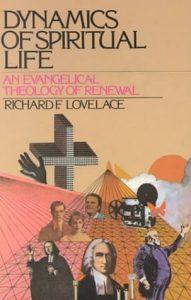 Around six years after reading this important book I had the privilege of sitting under Lovelace at Gordon Conwell Theological Seminary near Boston. I took his course on Jonathan Edwards at the time. He was in many ways your classic absent-minded professor: brilliant on things like theology and church history, etc, but sometimes forgetting the basics – like where he had parked his car!

I mention all this because I recently pulled the volume from my shelves, blew off the dust, and revisited it. It still repays careful reading. Whether you never heard of it, or also read it decades ago, it is well worth turning to – or returning to. Here I want to share parts of it with you.

The 450-page book has as its subtitle, “An Evangelical Theology of Renewal.” It looks at the modern evangelical church through the lens of church history, noting the important role of both reformation and revival. It is hard to do the book justice here in a short article, but let me highlight some important truths found in it.

Chapter 8 is about “How Revivals go wrong.” He begins the chapter by saying that

it is clear that not everything which accompanies a renewed surge of vitality in the church is necessarily healthy, productive and purely of the Holy Spirit. Almost every major revival recorded, in fact, has been surrounded by an aura of irregular religious activity and has also been centrally affected by elements of weakness and sin. As a result, successive eras of church leaders have found it easy to immunize themselves and their followers against awakening movements by applying caricatures stressing the worst features of past revivals.

He looks at the history of revivals, drawing upon the insights of the great American theologian and revivalist Jonathan Edwards. Lovelace especially utilises two important books by Edwards on this, Thoughts on the Revival in New England and Religious Affections. He notes how periods of renewal are “times of vigorous activity both among agents of God and agents of darkness.” Lovelace then says this:

The strategy of darkness against revival is threefold: (1) to destroy the work either by persecution or by accusation which will discredit it and limit its growth, (2) to infiltrate the work and reinforce its defects in order to provide more evidence for accusation, and (3) to inspire counterfeit revival which may deceive the elect and further confuse and alienate the onlooking world.

The first of these tactics, direct attack upon a renewal movement, is exemplified by countless situations in history. There has never been a revival which has not been severely attacked. Every advance of the kingdom of God has occasioned an explosion of conflict and contention….

The second demonic strategy for the defeat of revival, discrediting a movement by stirring up and reinforcing its defects, is one which Edwards analyzed in great detail. Edwards describes the devil as using the momentum of carnal zeal in the agents of revival somewhat as a Japanese wrestler uses the motion of his opponent to secure his defeat:

“If we look back into the history of the church of God in past ages, we may observe that it has been a common device of the Devil, to overset a revival of religion, when he finds he can keep men quiet and secure no longer, then he drives ‘em to excesses and extravagances. He holds them back as long as he can, but when he can do it no longer, then he’ll push ‘em on, and, if possible, run ‘em upon their heads….”

The third strategy of darkness in opposing revival, the intrusion of counterfeit movements to capture those seeking salvation and further discredit genuine renewal, is also especially apparent today. . . . [T]he apostolic writers regarded false religion as an antichristian weapon forged by the powers of darkness and expected its growth to parallel that of the expanding church.

Another key theme discussed by Lovelace is that of the need to keep together both sound doctrine and godly living. In Chapter 9 he deals with the importance of “Live Orthodoxy.” He begins the chapter this way: “One of the central theological issues confronting the Christian church in our generation and seriously dividing it is the problem of the function of sound teaching in the body of Christ.”

He looks at past options here, including that of “those twin expressions of experiential Christianity, Calvinist Puritanism and Lutheran Pietism.” He then continues:

The Puritan approach to the function of orthodox teaching was also heavily focused on sanctification and practical Christian living, for doctrine was “in order to godliness.” William Perkins defined theology as “the science of living blessedly forever”; his pupil William Ames defined it as “the doctrine of living unto God.” Both men tended to avoid speculative subtleties which were unrelated to the Christian life. This approach could easily lose its balance and topple into a pragmatic anti-intellectualism. But it also reflects elements of the New Testament pattern in which doctrine is always existentially focused on practice.

A Puritan sermon was never a tape-recording session in which abstract doctrinal information was transferred from the pastor’s memory to that of the congregation. It was always an operation on the spiritual lives of the hearers in which no doctrinal tool was used which did not vitally relate to the needs of some class among them. The preacher who was content to rehearse and admire doctrines without applying them to the life and the world of the congregation in such a way that believers sensed the guiding control of the Holy Spirit and heard the voice of God addressing them in concrete situations, was not for the Puritans a physician of souls, but an aesthetician or tool-salesman, displaying the instruments of healing but refusing to employ them.

He looks further at this matter, including once again discussing the thoughts of Jonathan Edwards on this, and then he states:

The key to live orthodoxy offered by the Puritan and Pietist traditions is the proper balance between the Spirit and the Word with appropriate attention given to the role of each. What this really means is that to proclaim Christ in living power it is necessary for us to depend on him in a double way. On the one hand, for accurate knowledge of the incarnate Word which he inspired through the Spirit and which is the continuing instrument through which his mind is made present among believers. On the other hand, for illuminated understanding of the written Word and power to transmit it to others, we must look up in dependence on the risen Word, who alone is able to enliven the dead conceptual knowledge of the fallen human mind through the sanctifying operation of the Holy Spirit, and to focus it existentially so that it will be wisdom in the biblical sense and not mere knowledge.

He next offers seven principles “bearing on the function and the limits of orthodoxy.” I will here just offer the opening sentence of each one:

1) Biblical doctrine (spiritually energized and illuminated propositional truth) is normally the instrument through which regenerative transformation of the human personality takes place in the Holy Spirit’s application of redemption (1 Pet. 1:22-23; Rom. 10:9, 17).

2) Biblical doctrine is therefore essential both in evangelism and in the church’s prophetic social witness.

3) Doctrine is a reliable indicator of the kind of spiritual life or motivating force within a person or movement; for life expresses itself by affecting thought and teaching.

5) Some measure of the life and power of the Holy Spirit can on occasion be found in persons and movements which have had little or no contact with doctrinal truth (Mt. 2:1-12; Ezra 1:1-4).

7) Erroneous doctrine, however, does not in every case indicate spiritual death or full allegiance to spiritual forces inimical to the kingdom of God.

Needless to say, this handful of snippets is just a tiny portion of what is found in this important volume. The book is still available, so if you have not yet read it, it is worth grabbing a copy. And if you already have it, it is well worth revisiting.

2 Replies to “The Dynamics of Spiritual Life”