How many Christians routinely violate the greatest commandment?

If my title just spoke about the most violated commandment, many folks would think of the 10 Commandments delivered by Moses in the Old Testament, and a healthy debate might take place as to which of the ten is violated the most. That could be an interesting exercise, although I suspect that all ten would be fairly evenly broken, ignored or violated. 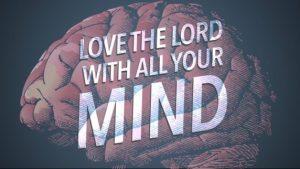 His reply – that it has to do with loving God with all of our being – is found in all three synoptic gospels (Matthew 22:34-40; Mark 12:28-34; Luke 10:25-28). The various component parts of the command (‘all your heart,’ ‘all your mind’ etc.) simply refer to the truth that we are to love God totally and completely, just as he has loved us totally and completely.

In offering this reply, Jesus was simply referring back to the original version of this as found in Deuteronomy 6:4-9. And the point I am seeking to make here is this: how many Christians in fact DO love God with all their mind? From my vantage point there are far too many who do not.

Before proceeding, let me point out one thing: Although the word ‘mind’ is found in the three gospel accounts, it is not found in the Deuteronomy text. But that does not mean it is not important. As J. G. McConville points out: “The phrase ‘all your heart’ might probably be rendered ‘all your mind’. The association of the [Hebrew] words leb, lebab, ‘heart’ with the intellect is clear from Jer. 5:21; Hos. 7:11).”

Once again, the point is to love God with the totality of our being – the various component parts offered simply serve to make that point. God has always sought a people who would fully love and worship him, holding nothing back. The references to the various elements simply mean that we are to love God with the entirety of our being – with all of who we are: heart, mind, soul and strength. God is to get all of us and all of our love.

I return to these biblical basics once again because there are always those who seem to delight in disobeying this commandment. Sure, they may like to come to God with all their feelings and emotions, but when it comes to loving God with their mind, many seem to baulk at this.

They simply do NOT love God with their minds. Some even try to make a virtue out of this. They have foolishly and unbiblically picked up the false notion that somehow the more unintelligent and unlearned and ignorant they are, the more spiritual they must be.

I get these folks coming to my site all the time. With a few recent pieces penned on things like philosophy and the place of reason, I have again had some fightin’ fundies come out of the woodwork, happy to attack me for daring to do so. They really seem to get angry when I dare to suggest that we actually should use our brains to glorify God.

They seem to think that the more they don’t know, the more clueless they are, and the more just plain unintelligent they are, the more they are some sort of great spiritual beings. And they are so happy to come here attacking me and others, judging us and parading their pseudo-spirituality around for all to see.

They are so unaware of how unbiblical and silly they are. They go on and on about how they trust no one, believe no one, and rely on no one – only the Word of God. But then they come along and quote other ‘mere mortals’ to justify their position!

Even more worrying is how they will come to my site – as mere men and women – telling me how wrong I am, all the while insisting that we should never listen to mere humans! Um, duh – what do they think they are? They come here full of all of their own human wisdom and teaching and tradition, all the while telling us that we should NOT have anything to do with human wisdom and teaching and tradition.

They of course cannot be reasoned with, because it seems they think reason, rationality and common sense are all of the devil. They seem to think the more irrational and foolish they are, the more godly they are. Never mind all the biblical injunctions to think and use our minds for the glory of God.

I was just reading again today in Scripture where James insists that we be wise – and he defines godly wisdom in these terms: “But the wisdom from above is first pure, then peaceable, gentle, open to reason, full of mercy and good fruits, impartial and sincere” (James 3:17, ESV).

Hmm, “open to reason”! Yes God wants us to be reasonable. He wants us to think straight. He wants us to use the minds he has given us for his glory. He does NOT delight in stupidity, deliberate ignorance, and intellectual laziness. Instead we are to love God with ALL of our minds. Why do some believers have such a hard time getting this!?

But these folks will latch onto a few texts, twist them out of context, and somehow think they have made their case. For example, they will mention Paul’s words about being regarded as a fool for Christ’s sake. But they really should realise that Scripture refers to at least two types of fools – one in a positive sense and one in a negative sense.

The Bible warns constantly about fools who have no knowledge and no wisdom. We are to avoid such fools at all costs. Proverbs especially speaks to this. But Paul is NOT saying he is – and we should be – that sort of fool. What he is saying is that as he follows Christ, the unbelieving world will consider him to be a fool.

Paul does not care what the world thinks of him. He is happy to be regarded as a fool if he must. But that does not mean he was foolish, or a fool in the sense warned against in Scripture. Indeed, we know that Paul was incredibly intelligent and well educated.

As such he sought to be all things to all men. To the unlearned and uneducated he could easily present the gospel and biblical truth. But he could also readily mingle and interact with philosophers and other intelligent folks, as in Athens. Paul did not throw his brain away, but he used it for Christ and the Kingdom.

Let me finish with a few obvious Christian truths here:

Glory in human reason alone is no good, but so too is glorying in how stupid or uninformed you are. Neither one brings glory to God nor advances the cause of Christ. I want little to do with either group of Christians to be honest. Both can be just so pompous, arrogant and fleshly.

7 Replies to “The Greatest Commandment – The Most Violated Commandment”