The dead-end street of socialism:

Socialism is a parasite on capitalism. As Dennis Prager put it, “Socialism spends the money that capitalism creates.” So if your concern is to help the poor and needy, bear in mind that without the creation of wealth in the first place, you will not be helping anyone. 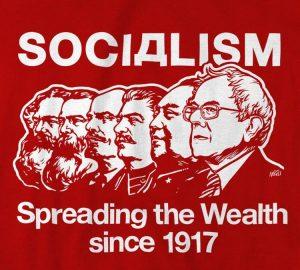 Redistributing a shrinking pool of wealth helps no one – except for the wealthy few who decide where the money goes. Yet today we have basically all the Democratic hopefuls for the 2020 US presidential election pushing one form of socialism or another.

They desperately need to learn the lessons of history, and they need to understand what living in a socialist country actually looks like. Two recent articles help us to do just that. The first is by a pair of researchers from the US Heritage Foundation. They offer the bigger picture as they remind us of “The Empty Promises of Socialism”.

They ask us to consider the costs of adopting socialism. Making use of a government economic report they answer: “Socialism destroys lives and societies. The historical record is clear: Everywhere it has been tried, socialism has done harm. It’s a cautionary tale that should be taught to every new generation.”

As the White House report points out: “[P]eaceful democratic implementation of socialist policies does not eliminate the fundamental incentive and information problems created by high taxes, large state organizations, and the centralized control of resources.”

In a socialist county, most of the wealth created by workers is controlled by the government, not by those who toiled to create it. The incentive problem is obvious: If what you earn is going to be spent by the government rather than by you, why bother to earn it in the first place?

Secondly, as pure-hearted as government bureaucrats might be, are their spending choices likely to be as beneficial for workers as if they had made the decisions for themselves? That’s a big leap, even if you discount completely the possibility of bureaucratic greed or corruption.

Again, the historical record is instructive. When small family farms were taken over by the government and repackaged in giant government administered cooperatives in China and the U.S.S.R., less food was produced, not more, and both countries suffered mass starvation.

Moreover, when government taxes wages at exorbitant rates, workers take a direct hit and are more likely to lose their jobs. The more people are able to retain the fruits of their labor, the more they will be able to improve their own lives and the lives of their families.

But socialism works directly against economic freedom, and therefore threatens each of these accompanying benefits.
The historical record does not look kindly upon socialism. During the 20th century, millions of people starved to death in socialist systems, and millions more were exterminated by socialist leaders desperate to maintain control. Socialism promises much, but delivers little. www.dailysignal.com/2018/10/25/the-empty-promises-of-socialism/

The second article I wish to draw your attention to is a newer piece, and a much more personal one. It is by Helen Raleigh, a woman who has lived through ‘socialism’ in China. She warns today’s Western socialists not to fall for the lies of socialism – it “brings nothing but misery to ordinary people.” She begins her very important article as follows:

Do you think a girl should eat less than a boy? That may seem like a crazy question. Yet it was the reality for people like me who grew up in socialist China. Under Chairman Mao’s socialist experiment, we had food stamps for essentials such as rice, cooking oil, meat and eggs. There were shortages of everything and these food stamps helped enforce a strict food ration policy.

This policy was gender based, designed under the assumption that a girl should eat less than a boy. A boy would get about four more pounds of rice on a monthly basis than a girl of the same age. However, my Chinese name happens to be a common boy name; therefore, I received the amount of rice ration meant for a boy. Even with this extra rice, I was always hungry.

This incident had a profound impact on my life. For the first time, I started questioning what kind of society I lived in, if someone else got to decide what and how much I could eat. Food wasn’t the only thing that was in short supply. As far as I can remember, there were very few things in my life I could call mine. Sharing was an integral part of growing up in a socialist society.

When I was born, my family of five shared one bedroom in a row of low-ceilinged bungalows. My mother made a curtain to separate it into two rooms. She, my sister and I shared one bed; my father and brother shared a smaller bed. We didn’t have a family kitchen. No one else had one either. Instead, every family had a little cooking area with its own coal-burning stove in a communal kitchen across from the bungalow. Because the ventilation of the communal kitchen was so poor, during dinner time, it would get so smoky we could hardly see.

Power shortages were more than common. Usually, each district would take a “voluntary” turn to have its power shut off for one day per week, in order to guarantee sufficient power for key industries. When there was no power, usually there was no running water either. We often had to store water in any container we could find.

But what she describes is true of not just China but all socialist countries. She concludes:

I recently met a young couple from Venezuela. We quickly realized that despite living on different continents and speaking different languages, we share many life experiences: “Were you hungry all the time?” “Yes.” “Did you have constant electricity blackouts?” “Of course.”

Besides the afflictions that we are more than familiar with, we have a shared concern for the increasing popularity of socialism in the U.S., especially among so many Democratic presidential candidates who are embracing socialist policies like “Medicare-for-all” so overtly and brazenly.

Immigrants like me came to the U.S. to escape socialism, not to encounter another round of a so-called socialist experiment. We know all too well where it will lead us. Socialism has been tried too many times in different places, by different people of different cultures and languages – Russia, China, Cuba and Venezuela just to name a few.

No matter where it is implemented, the result will be the same – individual freedom will be destroyed and ultimately there will be death, starvation and misery. Don’t believe the lies told by today’s American socialists, who claim that they can implement the system on a fresh slate and have different results. If you truly value your freedom and your right to self-determination, say no to socialism. www.foxbusiness.com/economy/socialism-china-lies-american-socialists-helen-raleigh

Wow, those are such important and necessary words. But trying to get Western leftists to listen to such truths is like pulling teeth. But we must keep warning nonetheless. And we must all hope that the Democrats get nowhere near the White House in 2020.