There is plenty of fuzzy thinking about what is variously called Scandinavian socialism, the Nordic model, democratic socialism, and so on. And now that most leftists have finally realised that their socialist utopia – Venezuela – is actually just another socialist hellhole, they are pointing to Scandinavia as their preferred model.

Whether Bernie Sanders and Alexandria Ocasio-Cortez in the US or Jeremy Corbyn in the UK, these dreamers think that socialism is still the way to go, and if we look hard enough we just might find a successful model of it somewhere.

So they point to the Nordic nations as if that will make their case. Not so. Indeed, hot on the heels of my article yesterday on the socialist basket case in South America, I had one guy send in a comment telling me Scandinavia is socialist, and Marxism and Christianity were basically one and the same. Good grief. 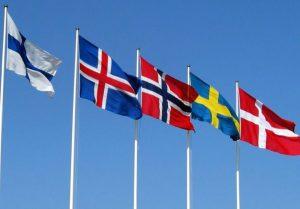 This guy appears to be as clueless when it comes to basic economics and political economy as he is about basic biblical teachings. But these trendy lefty Social Justice Warriors tend to be like that. They are usually as uninformed as they are emotive. Facts and data mean little or nothing, while emotions and virtue signalling mean everything.

But before going any further, let me just make a quick definitional point: Strictly speaking, Scandinavia is comprised of Norway, Sweden and Denmark. The Nordic countries include these three and a few more countries, such as Finland, Iceland, and Greenland.

Whether we refer to just the first three, or the larger group, it must be pointed out that the lefties are barking up the wrong tree when they say this is socialism in action. The simple truth is, the Scandinavian/Nordic countries are NOT socialist.

While they have high rates of taxation, extensive and generous welfarism, etc, they are also decidedly capitalist in all the basics: most of them feature – in varying degrees – private property, free market economies, privatisation of state sectors, wealth creation, private banking, and so on. That is not socialism, but very much capitalism.

It may be a ‘compassionate capitalism’ or some such thing, but it is not a genuine “third way” economy, nor is it socialism. It is time we got a basic grasp on all this. I just saw one ludicrous meme making the rounds that says, “Socialism is sharing”. Um no, not even close. Socialism is confiscation. The State takes any wealth you have created, keeps much of it for itself, and decides where the rest will go.

And one of the most basic truths of economics which the lefties never grasp is this: before you can redistribute wealth, you have to first create it. The free market, for all its faults, is the best thing we have ever come up with for wealth creation. And the worse thing for this is socialism.

Why bother working your butt off if you know the State is going to confiscate all or most of your earnings, and do with it as it sees fit? Why toil long hard hours when you know you will not get the reward of your labour, while someone who may never have lifted a finger will likely get it?

But back to the Nordic nations. Many experts have pointed out how decidedly UNsocialist they are. Let me cite just a few. As one economist puts it:

The myth of Nordic socialism is partially created by a confusion between socialism, meaning government exerting control or ownership of businesses, and the welfare state in the form of government-provided social safety net programs. However, the left’s embrace of socialism is not merely a case of redefining a word. Simply look at the long-running affinity of leftists with socialist dictators in Cuba, Nicaragua, and Venezuela for proof many on the left long for real socialism.

To the extent that the left wants to point to an example of successful socialism, not just generous welfare states, the Nordic countries are actually a poor case to cite. Regardless of the perception, in reality the Nordic countries practice mostly free market economics paired with high taxes exchanged for generous government entitlement programs.

First, it is worth noting that the Nordic countries were economic successes before they built their welfare states. Those productive economies, generating good incomes for their workers, allowed the governments to raise the tax revenue needed to pay for the social benefits. It was not the government benefits that created wealth, but wealth that allowed the luxury of such generous government programs.
www.forbes.com/sites/jeffreydorfman/2018/07/08/sorry-bernie-bros-but-nordic-countries-are-not-socialist/#642d471074ad

Or as another writes:

The public sector does not dictate the growth pattern or the way in which the economy should be run, it is generated from the private sector, which finances more than 60% of research and development, and government applies private-sector best practices of efficiency and transparency in the management of public services. In addition, public officials do not have a life-long position. The opposite of the political control these populists defend.

Nordic countries have carried out successful privatizations of state sectors, from telecommunications to electricity generation and distribution. Sweden privatized even the postal service. Even some forests were privatized. They have a labor market that is among the most flexible in the world.
www.dlacalle.com/en/face-it-nordic-countries-are-not-socialist/

So the idea that the Scandinavian countries are somehow socialist states is just arrant nonsense. And the idea that as some sort of advanced welfare state they are utopias on earth is also fully fallacious. All these nations are facing very real problems. One piece giving an overview of the situation offers ten reasons why we definitely should not emulate the Nordic model. Let me offer a few of them:

2) Most of what American progressives envy about the Scandinavian countries existed before they expanded their welfare state, and America’s voices on the left are mixing up correlation with causation. As Nima Sanandaji, a Swedish author of Kurdish origin who holds a Ph.D. from the Royal Institute of Technology in Stockholm, wrote in 2015:

“Many of the desirable features of Scandinavian societies, such as low income inequality, low levels of poverty and high levels of economic growth predated the development of the welfare state. These and other indicators began to deteriorate after the expansion of the welfare state and the increase in taxes to fund it.”

3) At its biggest, most far-reaching, and invasive form in the late 20th century, the Nordic model crushed startups and the growth of new companies. “As of 2000,” Johan Norberg writes, “just one of the 50 biggest Swedish companies had been founded after 1970.”

8) If the government is paying for everything, why is Denmark’s average household debt as a share of disposable income three times that of the United States? Meanwhile, the household-debt share in both Sweden and Norway is close to double that of the United States. The cost of living is particularly high in these countries, and the high taxation means take-home pay is much less than it is under our system.

9) Nordic-system evangelists would have you believe that citizens of freer-market countries are stressed while those living under generous social-welfare systems are happier and more relaxed. If American-style capitalism is depressing and dehumanizing, why are Iceland, Denmark, Sweden, Finland, and Norway not that far behind us, ranking in the top twelve countries for antidepressant use? Is it just the long winters? Why are their drug-related deaths booming? Isn’t it possible that a generous, far-reaching welfare state depletes people’s sense of drive, purpose, and self-respect, and enables them to explore chemical forms of happiness?
www.nationalreview.com/2018/03/ten-reasons-we-cant-and-shouldnt-be-nordic/

And let me look at Denmark in particular to further drive home these truths. The author interviews someone who knows the situation quite well:

How much truth is there in the popular idea of Nordic exceptionalism? Michael Booth, a British journalist, examines this question in detail in a recent book, “The Almost Nearly Perfect People: Behind the Myth of the Scandinavian Utopia.” Booth, a U.K. native who has lived in Scandinavia for over a decade.

What are some of the biggest misconceptions that you find in how the rest of the world understands the Nordic countries?

Again, I think we’ve all been guilty of projecting some kind of utopian fantasy on them. The Nordic countries are, for example, depicted as paragons of political correctness, yet you still see racial stereotypes in the media here — the kind of thing which would be unthinkable in the U.S. Meanwhile, though it is true that these are the most gender-equal societies in the world, they also record the highest rates of violence towards women — only part of which can be explained by high levels of reporting of crime.

Denmark, meanwhile, promotes itself as a “green pioneer” and finger wags at the world about CO2 emissions, and yet it regularly beats the U.S. and virtually every other country on earth in terms of its per capita ecological footprint. For all their wind turbines, the Danes still burn a lot of coal and drive a lot of cars, their country is home to the world’s largest shipping company (Mærsk), and the region’s largest air hub.

Sweden is supposedly “neutral” (it’s not, and has not been for decades), yet since the days when it sold iron ore to Hitler, its economy has always benefited from its arms industry, which is one of the world’s largest.

It is fantastic in theory, except that, in Denmark, the quality of the free education and health care is substandard: They are way down on the PISA [Programme for International Student Assessment] educational rankings, have the lowest life expectancy in the region, and the highest rates of death from cancer. And there is broad consensus that the economic model of a public sector and welfare state on this scale is unsustainable. The Danes’ dirty secret is that its public sector has been propped up by — now dwindling — oil revenues. In Norway’s case, of course, it’s no secret.
www.washingtonpost.com/news/wonk/wp/2015/11/03/why-denmark-isnt-the-utopian-fantasy-bernie-sanders-describes/?utm_term=.c162a6044f06

Much more can be said on all this. Scandinavia is not a model of socialism in action. And it has plenty of problems, making its high-taxing, high-entitlement system unsustainable in the long term. These mixed economies have some pluses, but also many minuses. We need to learn from their mistakes, and not see them as a panacea.

Let me finish by mentioning a short video by Swedish historian Johan Norberg which is well worth watching on all this: www.youtube.com/watch?v=1B58Nf7SzZY

10 Replies to “Scandinavia, Socialism, and the Welfare State”