As biblical illiteracy and radical leftism both increase throughout the West, we are finding more and more people who say they are Christians making the silly claims that Jesus was a socialist, that socialism is somehow biblical, and that all Christians should be socialists.

With socialism again being promoted big time by politicians like Alexandria Ocasio-Cortez, Bernie Sanders and Jeremy Corbyn, and with too many clueless Christians hopping on the bandwagon, we need to carefully deal with these claims.

Now a topic like this is far too large to properly cover in a short article. There are a number of related issues that would have to be dealt with to do it justice. For a bit of the bigger picture on all this, see the other 134 articles I have penned on economics: billmuehlenberg.com/category/economics/ 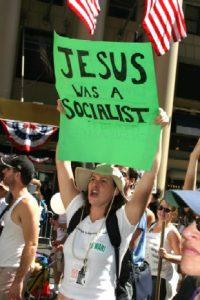 So let me seek to narrow things down a bit here. A standard mode of thinking by the religious left, and those pushing “social justice,” is to say something like this: ‘Jesus cares about the poor and therefore so should we. That means we must run with socialism.’

The first two claims happen to be true, but the third one is demonstrably false. Yes, the Bible often speaks about the poor, and how we might help them. Some New Testament passages would include Romans 15:25-26; 2 Corinthians 8-9; Galatians 2:10; and 1 John 3:17.

But note that not one of these verses speaks about the state dealing with the poor: individual Christians and Christian congregations are all being addressed in these passages. It is all about believers voluntarily doing what they can to help the needy. It is not about the state confiscating wealth and redistributing it as it sees fit.

It is about voluntary charitable giving versus government compulsion. That is not to say there is no role for civil government here, and basic safety net provisions provided by the state can be useful at times. But the entire New Testament ethic lies with the believer and the church, not with the government.

Of course at this point some folks will point to the early church and claim that this was socialism in action. Um no, not even close. That too was about voluntary giving, not state taking. But I have examined those texts in some detail here: billmuehlenberg.com/2010/06/21/difficult-bible-passages-acts-432-511/

Let me offer just a bit from that article: a quote from New Testament scholar Ben Witherington:

Nothing is said here about a transfer of ownership of property or any requirement to surrender it, unlike the case at Qumran; the discussion is about the liquidation of some assets. Nor is there any evidence of control of ownership of all property by the community; rather, there is control and distribution of the funds given to the community. Notice that Luke calls those who give in this text “owners,” which comports with what he will say in Acts 5. The overall impression left by both this summary and the following examples of Barnabas as well as Ananias and Sapphira is that the giving was voluntary, not required.

OK, if that appeal does not work, the social justice crowd is not finished yet. They will head back to the Old Testament and claim that Leviticus 25 is a clear case of socialism in action. Of course even a cursory reading of the text shows that it is nothing of the sort.

All that the Year of Jubilee did was affirm the basics of the free market economy by fully affirming private property. The return of the lands was to the original owners, the original families. It had absolutely nothing to do with state confiscation of properties, and then having them redistributed to others.

But again, I have spoken at length to this passage as well. See this piece for much more detail: billmuehlenberg.com/2010/09/02/difficult-bible-passages-leviticus-25/

Can we abuse and misuse private property? Of course we can. But that is no more a reason to jettison or denigrate it than we should Christianity itself since it also can be abused and misused. Christians are called to be good stewards, and we must use our material goods for good purposes, which includes helping those less fortunate than ourselves.

As Wayne Grudem reminds us in his important 2010 book, Politics According to the Bible:

Private property is never viewed in the Bible as an absolute right, because all that people have is ultimately given to them by God, and people are viewed as God’s ‘stewards’ to manage what he has entrusted to their care. Yet the fact remains that, under the overall sovereign lordship of God himself, property is regularly said to belong to individuals, not to the government and not to “society” or the nation as a whole.

But see much more detail, along with numerous other biblical passages, in this piece: billmuehlenberg.com/2016/05/30/bible-private-property/

So Jesus cared about the poor and his followers are to care about the poor as well. And as we seek to do this, we will not see socialism as the way forward. The simple truth is, whenever socialism is tried, the poor are usually hurt, not helped.

The latest tragic example of socialism at work is Venezuela, where things are going from bad to worse, and starvation and crime are skyrocketing. See my recent piece on this for all the grim details: billmuehlenberg.com/2018/08/12/venezuela-socialism-kills/

A basic truth about economics is this: before any wealth can be redistributed (which is what socialism is all about), it first has to be produced (which is what the free market is all about). Socialism has a proven track record when it comes to the latter: it is an abject failure. Like it or not, the only economic system that has been tremendously successful in wealth creation is the free market.

It is not a perfect system, and it of course can be abused and misused. But if we want to help the poor, we need to lift them out of poverty and offer them productive work. Only free market economies have ever been able to do this on a large scale and over the long haul.

But that case I have also made in more detail elsewhere in numerous articles. See for example these two: billmuehlenberg.com/2015/04/06/markets-and-morality/

While Jesus may not have been a gung-ho capitalist – he did not come here on an economic mission – he certainly was not a socialist either. But what Jesus and the rest of the Bible teaches clearly supports the basic tenets of a free market approach to wealth and poverty. It does not favour a statist solution to such problems.

In a fallen world no economic system is perfect, but some are clearly much better than others, especially when it comes to actually helping the poor. For all its shortcomings, a free-enterprise system comes the closest to seeing real opportunities for all to better themselves and move out of poverty.

Sure, a moral basis for the free market is crucial, otherwise a dog-eat-dog world can erupt. And many of the great defenders of the free market have made this case for the necessity of a free economic system coupled with a decidedly moral framework. As just one example of this, see the many important writings of Catholic social thinker Michael Novak, which I discuss here: billmuehlenberg.com/2017/02/18/michael-novak-rip/

As Protestant pastor John Piper once put it:

In general I would say that the impulses of biblical Christianity include:
-compassion for the disadvantaged;
-justice under law without respect to status;
-freedom to create and produce;
-private property.
And my own sense is that history and reason and further biblical reflection lead to the conclusion that freedom and property rights lead to greater long-term wellbeing, or, like we say today, flourishing for the greatest number. And it should not go unsaid, lastly, that every economic and political system will eventually collapse where there are insufficient moral impulses to restrain human selfishness and encourage honesty and good deeds even when no one is watching.
www.desiringgod.org/interviews/how-should-christians-think-about-socialism

The truth is, there is all the difference in the world between Christianity and socialism when it comes to helping the poor. The Christian believes that genuine generosity is giving away your own money, motivated by godly compassion to help the needy. The socialist believes that generosity is taking money from some people and giving it to others, in the interests of some vague and unworkable notion of “equality”.

As Matt Walsh recently put it,

We know that Jesus is not a socialist because socialism and Christianity stand on opposite ends of the spectrum. The socialist views poverty, and all human suffering, as a cultural disease that must be cured by the generosity of the State. It takes responsibility out of the hands of the individual and places it into the hands of the collective, which is really a collection of bureaucrats. It allows you to look at a poor man and say, “He’s not my problem because he’s our problem.” And by “our” you really mean “their.”
www.dailywire.com/news/33888/walsh-no-jesus-not-even-close-socialist-matt-walsh

As already mentioned, plenty more needs to be said on all this. The issues of economics, wealth and poverty, political economy, and how best to help the needy, are complex and multifaceted. And the biblical data on all this is also rather extensive. So consider this article to be just a very introductory piece on these important issues.

Let me conclude with some wise words by R. C. Sproul:

Jesus wants us to care for the poor. But the “us” is me, and you. It is not me and you voting for a candidate who promises to take from them. We cannot feed the hungry in Jesus name if we have just taken the food from our neighbor. Instead we are baptizing what we are really doing, giving what we have taken in Caesar’s name. We have to give freely, from our own blessing. The growing zeal among younger evangelicals for what they call “social justice” is sadly too often a zeal for social injustice. The passion among millennial Christians for caring for the downtrodden is laudable. Their willingness to tread down their neighbor, however, is not. All of us are called to receive freely, to give freely. None of us, however, are called to take. And when we do we take Jesus’ name in vain.
www.ligonier.org/blog/socialism-jesus-name/

13 Replies to “Actually No, Jesus Was Not a Socialist”