I learned afresh about the reality of spiritual war while in Ghana, and the need for believers to fully engage on that level:

If you are up on your Christian music, and/or you are an old guy – like me – then you will know what my title is about. The late Keith Green released a song in 1977 with those words. They refer of course to the devil, and the fact that most folks in the West no longer believe he exists.

And the sad truth is most Christians don’t seem to believe that he exists either – at least they sure do not act as if he was real. One is reminded of the famous words of C. S. Lewis in the preface to his 1942 classic book, The Screwtape Letters:

“There are two equal and opposite errors into which our race can fall about the devils. One is to disbelieve in their existence. The other is to believe, and to feel an excessive and unhealthy interest in them. They themselves are equally pleased by both errors and hail a materialist or a magician with the same delight.” 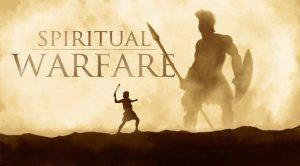 They seem to have no concept of the battles we are in, of the spiritual war that is going on all around us, and of the enemy powers working overtime to undo and destroy the things of God and His people. The church throughout the West is taking a savage beating, is losing in so many areas, and is compromising and crumbling massively, yet most believers seem to have no inkling of the spiritual attacks which are behind all this.

All of the incredibly horrible things we see happening in our culture today such as the abortion genocide, the war on marriage and family, and the hyper sexual onslaught are all much more than mere cases of secular left activism. Behind them all are the spiritual powers of darkness.

I am writing this for several reasons. An hour ago I returned home from a week in Africa. While I am utterly exhausted – the week was very full, and I can never sleep when I travel – I am too pumped up to try to go to sleep now: I was so energised by what I encountered there.

I was mightily stirred in my spirit by what I saw happening there. Ghana is a spiritual powerhouse in Africa. In the short time I was there I got to know so many mighty men and women of God. They are real champions, and real heroes. We could use many more like them here in the West.

I could mention many names here but that would make this piece too long – maybe another time I will single out some of these African champs for Christ. But let me state that one of the reasons they are having such a mighty impact for God is because they fully believe in the reality of God. But they also believe in the reality of Satan, and they engage in prayer and spiritual warfare. They can see these battles taking place in a very real way.

Things like intercessory prayer, fasting and spiritual warfare are all part of this – you know, the sorts of things we speak about, but so seldom do on a regular and passionate basis here in the West. No wonder they are having such a mighty harvest of souls and are holding the line against all the secular left agenda items.

And no wonder we keep losing time and time again. Until we wake up to the reality of the spiritual war and start getting serious about it – with at the very least much more concentrated and concerted prayer – we will continue to see the other side keep winning while we keep losing.

I could appeal to many mighty saints of God here on this, but let me mention just one: the great Leonard Ravenhill. Here are four brief quotes from him that help to set the stage for what I am speaking about here.

“Many believers live as if this world were a playground instead of a battleground.”

“When a nation calls its prime men to battle, homes are broken, weeping sweethearts say their good-byes, businesses are closed, college careers are wrecked, factories are refitted for wartime production, and rationing and discomforts are accepted—all for war. Can we do less for the greatest fight that this world has ever known outside of the cross—this end-time siege on sanity, morality and spirituality?”

“The Church used to be a lifeboat rescuing the perishing. Now she is a cruise ship recruiting the promising.”

“Prayer is not a preparation for the battle; it is the battle!”

“How can you pull down strongholds of Satan if you don’t even have the strength to turn off your TV?”

I mentioned Keith Green’s song, so let me run with that. The lyrics are these:

Oh, my job keeps getting easier
As time keeps slipping away

I’m gaining power by the hour
They’re falling by the score
You know, it’s getting very simple now
‘Cause no one believe in me anymore

Oh, heaven’s just a state of mind
My books read on your shelf
And have you heard that God is dead?
I made that one up myself
They dabble in magic spells
They get their fortunes read
You know they heard the truth
But turned away and followed me instead

I used to have to sneak around
But now they just open their doors
You know, no one’s watching for my tricks
Because no one believes in me anymore

Everyone likes a winner
With my help, you’re guaranteed to win
And hey, man, you ain’t no sinner
You’ve got the truth within
And as your life slips by
You believe the lie that you did it on your own
But don’t worry
I’ll be there to help you share our dark eternal home

Oh, my job keeps getting easier
As day slips into day
The magazines, the newspapers
Print every word I say
This world is just my spinning top
It’s all like childs-play
You know, I dream that it will never stop
But I know it’s not that way

One video version of the song is found here: www.youtube.com/watch?v=PhuoN1Wwj74

It is time we realised that we are in a war – a huge, protracted and costly spiritual war. And when one is in a war, only the weapons of warfare will suffice. And there can be no sitting on the fence in a time of war either. One final quote, this time from Martyn-Lloyd Jones, commenting on Ephesians 6:10-12:

The Christian life … is a warfare, it is a struggle. ‘We wrestle.’ The whole section is designed to impress this fact upon us. There is no grosser or greater misrepresentation of the Christian message than that which depicts it as offering a life of ease with no battle and struggle at all. . . . The first thing we have to realize is that the Christian life is a warfare, that we are strangers in an alien land, that we are in the enemy’s territory. We do not live in a vacuum, in a glasshouse. The teaching which gives the impression that the pathway to glory is all easy and simple and smooth is not Christianity, it is not Paul’s Christianity, it is not New Testament Christianity. It is the hallmark of the quack remedy always, that it cures everything so easily! One dose, and there is no more trouble!

12 Replies to “No One Believes In Me Anymore”