Christians can say and share the most foolish things:

The world always has been filled with goofy ideas, dumb ideas, and just plain false ideas. But with the advent of the internet, we seem to have far more of them – or certainly much easier and quicker access to them. Simply open a social media page for example and you will get plenty of silly sayings, queer quotes, and madcap memes. 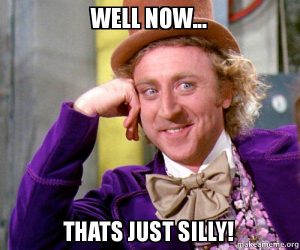 When these things are clearly at odds with Scripture, or tend to massacre basic biblical beliefs, Christians should not be so keen on passing them around online. But I see Christians regularly running with some of these things. In this latest instalment of my irregular but ongoing series, I offer five more.

As with many of the examples I have featured in earlier articles, two things become clear: One, there may be a bit of truth in many of these sayings, quotes and memes. But often they have a bit of falsehood as well, which is what makes them rather unhelpful, if not dangerous. It is this mixture of truth and error we must watch out for.

Two, many of these are inspirational and spiritual in nature, but too often they reflect New Age thinking rather than biblical truth. They are too much in the ‘just think positive thoughts and everything will work out’ category and are not reflective of Scriptural reality. Here then are my five most recent examples.

“Once you choose hope, anything is possible.”

This, again, is another ‘mind over matter’ type of quote, one that is kind of true but also kind of false. Because we are mere humans, and not God, anything is certainly not always possible. I may really like to be 22 again, real good looking, and fabulously wealthy. But that just ain’t gonna happen, no matter how much hope I have or try to muster.

And when Scripture speaks about anything being possible, it never means whatever we want will be granted us, no matter how whacky, how wrong, or how selfish it is. Only that which is fully in accord with the will of God is achievable or possible.

And even good things can sometimes be denied the true child of God. Perfect health and zero suffering might be hoped for, but all Christians will go through times of illness, hardship, suffering and tribulation. Prayer and hope may result in some of these things being resolved or overcome but not always.

And sometimes you can pray and hope all you like, but God may have other ideas in mind, and what you desire just will not come about. The Apostle Paul provides the perfect example of this in 2 Corinthians 12:1-10. He sure did not want the thorn in the flesh that he had to deal with. He hoped it would go, he prayed that it would go.

But as we read in verse 8-9: “Three times I pleaded with the Lord about this, that it should leave me. But he said to me, “My grace is sufficient for you, for my power is made perfect in weakness.” So mere hope, as important as it is, is no guarantee of everything happening that you desire.

What does matter is that our hope is fully in God, and having a willingness to do or be whatever it is that God wants us to do and be. Only when our wills are fully aligned with his will can we begin to speak of biblical hope, properly understood.

“Your beliefs don’t make you a better person, your behavior does.” Unknown

Um, not quite. Yes, behaviour is certainly important. But beliefs matter as well, and bad beliefs almost always lead to bad behaviour. For the secular person, for example, if you believe Jews or Blacks or babies are inferior and subhuman, chances are really good you will treat them that way.

For the Christian, if you believe in a hyper-grace theology that says we can live like we want because we are under grace, you will more likely be willing to do bad things, and be a bad person. Wrong beliefs can lead to bad behaviours. Good beliefs can and should lead to good behaviours.

Of course, we all know of believers who have all the right doctrines down pat, but their lives do not really speak much about Christlike character and behaviour. And the devil of course is aware of all the right beliefs, but he is a devil still. So belief and behaviour are both crucial for the believer.

Pitting the one against the other is hardly biblical. Trying to divorce good behaviour from proper belief is not the way to go for the Christian. There are plenty of cultists and heretics who have terrible and false beliefs, but they often seem to live nice, moral lives. So good behaviour on its own can be just as problematic. Once again, we need to get the biblical balance right here.

“Choose being kind over being right, and you’ll be right every time.” -Richard Carlson

I have no idea who Carlson is, but I have been saddened to see Christians proudly passing this meme around on the social media. Of course, if they mean by this a very watered-down version of what it is saying (eg., be kind to your wife, and don’t worry about winning every argument), then we can all more or less go along with this.

But applying this to important truth claims would be disastrous. Consider how this plays out in reality. Let’s say you are discussing Jesus with a Muslim. You know that they regard the claim that Jesus is God’s son as being blasphemous. So if you have only one option here – kindness or being right – you may want to be kind, cease defending the biblical Jesus, and just go along with what your Muslim buddy believes.

Hmm, is that being right? Not at all. There is nothing right about a Christian denying or downplaying a vital biblical truth – just to be ‘kind’. And is that being kind? No, not at all. Allowing a person to believe lies and not sharing the truth with them is hardly kind or loving. It is the height of being unloving if you allow them to slip into hell without warning.

So this is unhelpful in so many ways. And it is also a case of a false dilemma: ‘What’s it gonna be bud – be kind or be right?’ But why not both? Why not seek what is right and true, while also being kind. Indeed, real kindness always means being truthful. But I have dealt with this in more detail here: billmuehlenberg.com/2019/09/18/two-wings-of-a-plane-truth-and-love/

“There is NOTHING you can do that will make God stop loving you.”

This is another one that we must reply, “Well, yes and no.” On the one hand God’s love is amazing. But to try to argue that it is only always unconditional is another matter. God’s love is an initiating love, so in that sense it is unconditional. He loved us while we were yet sinners (Romans 5:8). There was nothing really lovable about us as sinners. Indeed, God hates sin and must judge it. But the work of Christ made a way for alienated sinners to get right with God.

But two more considerations must be discussed here. The sinner who rejects God’s love will seal his own fate, and will know only the wrath of God. So in a sense everything they do – and are – is stopping the love of God. As for the believer, we have a relationship with God through Christ. Like any relationship, both parties are involved. When we as believers sin and/or turn our back on God, we disrupt that relationship, and we must deal with that rupture.

A marriage is not ended when a spouse sins against the other spouse, but the broken relationship has to be dealt with. Apologising, asking forgiveness, and seeking to stop the harmful behaviour is part of how we restore things in our marriages. It is similar in our relationship with God.

Indeed, because God does love us, he will discipline us when necessary. As a father loves a son or daughter and offers loving discipline, so God does the same with his own children. That is the clear message of Hebrews 12:3-17. So we can do things that hurt a love relationship, and God will take steps to bring us back to himself if we are not doing so ourselves.

“The less you respond to negative people, the more peaceful your life will become.”

Again, there MIGHT be some truth to be found in a saying like this, but it depends on what the person had in mind when he said it. If he is offering a general rule of thumb about not getting involved in too many arguments, or not wasting time with trolls or critics, then yes, there is of course some peace of mind that can come as a result.

But for the Christian at least several things can be said. One, it depends on what is meant by “negative people”. If they are the ones I just mentioned, that is one thing. But far too often many Christians will label other believers as being negative when they simply quote Scripture, take holiness seriously, warn about sin, or speak out in the culture wars.

I routinely do all four of these things, and I often am criticised as a result: ‘Bill, you are just too negative.’ They just want to hear about ‘nice’ things and never deal with anything that might make them feel a bit uncomfortable. But I have dealt with this elsewhere, eg.: billmuehlenberg.com/2012/05/24/youre-too-negative/

And what is meant by ‘responding less to them’? One might argue that a cultist or a heretic or an apostate are negative. Sometimes and in some cases we can just avoid them, but often we are meant to confront them. We are not to allow theological error to go unchecked. We are not to allow immorality or rampant sin in the church to go unchecked. Such things must be dealt with.

Whether taking on such things leaves you feeling “peaceful” does not really matter. Indeed, having a peaceful life may not always be the highest good that we should pursue. Standing for Christ and the Word in a dark and hostile world will seldom be peaceful, but it is what we are called to do. So all in all, this is a pretty useless saying.

8 Replies to “Yet More Dumb Memes and Sayings”