Some thoughts on the great J. R. R. Tolkien and his Christian impact:

John Ronald Reuel Tolkien was many things: an Oxford don, a poet, an expert in ancient and medieval English, and an extremely successful novelist. He is especially known for several things: his book The Hobbit and his The Lord of the Rings trilogy, and his friendship with another Christian literary giant, C. S. Lewis. 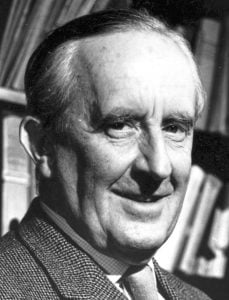 He was born on January 3, 1892 in South Africa but at age 4 moved to England with his mother and brother. He went to King Edward’s School in Birmingham and Exeter College, Oxford, obtaining a B.A. in 1915 and an M.A. in 1919. He married Edith Mary Bratt on March 22, 1916. They had four children. One son, Christopher John Tolkien, just passed away two weeks ago.

During the same year as his marriage he saw active duty on the Western Front during the Somme offensive. After some months of trench warfare he succumbed to “trench fever” and was sent back to England in November. For most of his adult life he taught English language and literature.

In the 1930s and 40s a number of literary greats used to meet on a regular basis in Oxford, often at The Eagle and Child pub. Those involved included Tolkien, Lewis, Owen Barfield, and Charles Williams. They informally met for conversation and drink, often to read and discuss the works they had written. It was there that Tolkien read aloud the LOTR to the others; Lewis’s The Screwtape Letters was read; and Williams’ All Hallow’s Eve was read.

Of interest, when Lewis read aloud his The Lion, the Witch and the Wardrobe, Tolkien made it clear that he did not like it very much. Indeed, as Lewis told a friend, he ‘disliked it intensely’. And as Tolkien had said, ‘It really won’t do, you know!’ He felt it has been written too hastily, was too explicit in its Christian message, and so on.

Tolkien and Lewis had first met in 1926. Lewis was to become one of Tolkien’s closest friends, and the latter was partially responsible for moving Lewis out of his atheism and back to Christianity. While he was a devout Roman Catholic, Lewis remained an Anglican.

When Lewis died in November of 1963, there had been a decade long cooling off between the two, partly because of Lewis’ marriage, and partly because of his dislike of Williams. Tolkien said this however: “But we owed each a great debt to the other, and that tie, with the deep affection that it begot, remained. He was a great man of whom the coldblooded official obituaries have only scraped the surface.”

Tolkien was a prolific writer, but as mentioned he is best remembered for two major works. The Hobbit was published in 1937, although written earlier, and his epic The Lord of the Rings was published in three volumes during 1954–1955.

The LOTR is among the most popular and most widely sold works of fiction of the last century. It obviously was a reflection of his own faith. As he wrote in a letter, “The Lord of the Rings is of course a fundamentally religious and Catholic work; unconsciously so at first, but consciously in the revision. That is why I have not put in, or have cut out, practically all references to anything like ‘religion’, to cults or practices, in the imaginary world. For the religious element is absorbed into the story and the symbolism.”

Of course many other works of his can be mentioned, such as: The Silmarillion, The Adventures of Tom Bombadil, Farmer Giles of Ham, and Smith of Wootton Major. His books continue to sell very well indeed, and the Peter Jackson film versions of his two major works (LOTR, 2001-2003, Hobbit, 2012-2014), certainly helped to make him even more popular. A helpful list of his writings can be found here: www.tolkiensociety.org/author/books-by-tolkien/

Let me share what I have just read in two new books which both have short sections on Tolkien and his remarkable influence, especially the LOTR. In his very important new book Dominion, historian Tom Holland looks at the massive impact Christianity has had on the West and its values and social goods that we all enjoy and take for granted. In a chapter on the First and Second World Wars he devotes a number of pages to Tolkien. Let me offer a few quotes:

Every story, he believed, was ultimately about the fall. No less than Augustine had done, he interpreted all of history as the record of human iniquity….

[He] could not rest content with writing a children’s book. His ambitions were too epic in scale. ‘The City will be hemmed in,’ Augustine had written, ‘hard pressed, shut up, in the straits of tribulation, yet it will not abandon its warfare.’ This vision, of the struggle to defy evil, and of the costs that it imposed, was one that kings and saints had held to, back in the early years of Christendom; and Tolkien was much moved by it. . . . His hope for The Lord of the Rings was that others, when they came to read it, would find truth in it too.

Naturally, as a Catholic, Tolkien believed that the whole of history bore witness to Christ. He felt no call to apologise, then, for cloaking such self-knowledge as he had, and such criticisms of life as he knew them, ‘under mythical and legendary dress’….

His purpose in writing The Lord of the Rings had not been a merely pecuniary one. His ambition had been one that Irenaeus, and Origen, and Bede had shared to communicate to those who might not appreciate them the beauties of the Christian religion, and its truth. The popularity of his novel suggested to him that he had succeeded. The Lord of the Rings would end up the most widely read work of fiction of the twentieth century, and Tolkien its most widely read Christian author.

And Alister McGrath, also an Oxford professor, has recently penned a work on the early Christian creeds called The Landscape of Faith. He also notes the great impact Tolkien has had:

The Lord of the Rings is now widely regarded as one of the great works of English literature. One of its most distinctive themes is the reality of evil. Tolkien names evil, thus giving us permission to challenge the bland and inadequate moral outlook of our age, which insists we respect everything and criticize nothing. Like his close friend C. S. Lewis, Tolkien was convinced that we had lost the moral vocabulary that enabled us to speak of evil, and thus to fight it.

But that is not the only theme we find so powerfully explored in Tolkien’s epic work. It speaks of the role of the weak and powerless in changing the world for the better. That’s why Hobbits – such as Frodo Baggins, and his companion Samwise Gamgee, also known as ‘Sam’ – are so important in the narrative of The Lord of the Rings. They are the little people, and in the end they are the ones who make the difference. They may feel that they are part of a story that is too big for them, yet they grow to take up their places within it. It is easy to feel overwhelmed by a sense of despair and powerlessness as we contemplate a world that we seem incapable of redirecting towards the good. Yet, as Tolkien so clearly saw, we need a vision of the good and a sense of empowerment in the midst of our weakness if anything is to be changed.

Many will feel that one of the most powerful themes affirmed by Tolkien in The Lord of the Rings is the reality of the Christian hope in the midst of despair and seeming helplessness….

Yes quite so. One of the things that impresses me the most when I read the LOTR is the graphic reality of good versus evil, of the spiritual battle we all are involved in. It helps to solidify in my mind and spirit the very real nature of the Christian drama and conflict being played out every day of my life – and all of us. We all owe Tolkien so very much.

I conclude with four quotes from the first instalment of the LOTR, The Fellowship of the Ring:

‘I wish it need not happened in my time,’ said Frodo. ‘So do I,’ said Gandalf, ‘and so do all who live to see such times. But that is not for them to decide. All we have to decide is what to do with the time that is given us.’

‘Behind that there was something else at work, beyond any design of the Ring-maker. I can put it no plainer than by saying that Bilbo was meant to find the Ring, and not by its maker. In which case you also were meant to have it. And that may be an encouraging thought.’ (Gandalf to Frodo)

‘And now,’ said the wizard, turning back to Frodo, ‘the decision lies with you. But I will always help you.’ He laid his hand on Frodo’s shoulder. ‘I will help you bear this burden, as long as it is yours to bear. But we must do something, soon. The Enemy is moving.’

‘I suppose I must go alone, if I am to do that and save the Shire. But I feel very small, and very uprooted, and well – desperate. The Enemy is so strong and terrible.’ (Frodo)