To be really accurate I should title this piece ‘The Apostle Paul and Our Riches in Christ’ for that is what it is really all about. Yes, I will utilise the great Welsh preacher Martyn Lloyd-Jones and his exposition of Paul’s epistle to the Ephesians, but it is Paul and his divinely inspired words that need to be emphasised here. 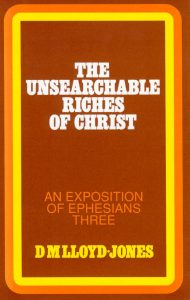 I pen this piece for various reasons. One, during this time of global crisis, there is nothing better for believers to do than to remind themselves of some fundamental truths concerning their faith. Two, I have recently been revisiting some of the sermons of Lloyd-Jones on Ephesians. Three, the encouragement found in both these men is well worth sharing at such a time as this.

Of course all of Scripture can be appealed to, not just Paul and his writings. And not just one book, or one chapter of one book. But I will restrict myself to one remarkable chapter in the Pauline corpus: Ephesians chapter three. In this chapter Paul does two main things: he reveals the mystery of the gospel (vv. 1-13) and prays for spiritual strength (vv. 14-21).

Lloyd-Jones preached on Ephesians from 1954 to 1962. In his Sunday series he gave 260 sermons on the epistle. They are now available in eight volumes, totalling some 3000 pages. His sermons on Eph. 3 were delivered during 1956, and are found in volume three of the set: “The Unsearchable Riches of Christ”.

Let me here simply offer a number of quotes from this book. It is hoped that you be blessed, encouraged and ministered to as you read them. First, some commentary of his on Eph. 3:2:

That is what Paul means by saying that a dispensation, a stewardship of this amazing mystery of God’s grace had been given even to him. God had filled him with his Spirit, had enabled him to understand. He had sent him out to preach and given him power to preach, and to attest the truth by the performance of miracles. In due course he had come to the Ephesians and preached to them, and those who believed were added to the Church. And now he tells them that he is in prison because of that.

What a tremendous thing this is! These Ephesian believers, most of whom were probably ordinary common slaves, had been included in this eternal plan and scheme of God. Do you realize the trouble to which God has gone in order that you and I might be redeemed and rescued and might become saints, and might eventually spend our eternity in His glorious presence?

He says this about verses 7-8:

I must emphasize again that Christ Himself is the riches, and it is as I know Him and possess Him that I am a participator in the riches. The Apostle had a personal knowledge of the Lord Jesus Christ, and that is the greatest treasure in the world. We often say, and it is true, that the greatest blessing that we can have in this world is to have a good husband or wife or friend. We say that that is a priceless possession. But in the gospel we are offered this knowledge of, and this companionship with, Christ. The Apostle in writing to the Philippians says, ‘To me to live is Christ’ (Phil 1:21). It is life to him – to know Christ. Then he proceeds to say that his greatest ambition is ‘that I may know him’. He does not mean simply to know about Him, he means to know Him, so that he can go and talk to Him and listen to Him. That is how the Apostle lived. He was in this state of communion with Christ. Christ was nearer to him and dearer to him, and more real to him, than anything in the world, He is enjoying this already, and he wants more and more of it.

This was the wonderful result of what had happened to them, they has been made ‘members of the household of God’, ‘fellow heirs’ with the Jews, members of the same body, partakers of the same promises; they had been brought into the great family of God. Nothing we can ever learn is more precious for us than to realize this glorious truth. You may be unknown by the world, you may be insignificant, or you may feel that you are forgotten, that no one knows anything about you; and that may be true. But if you are ‘in Christ,’ if you are a Christian, you belong to God, you are in His family, and your Father has His eye upon you. Nothing can happen to you apart from Him and without His permission; ‘the hairs of your head are all numbered.’ You are as much His child as the greatest saint, the mightiest apostle that has ever lived. “There is only one family, the ‘whole family’, and He is the Father of the whole family, the Church ‘militant’ as well as the Church ‘triumphant’. We all have this access into His presence.

How wonderful is God’s salvation and God’s provision! Because it is a matter of love and not intellect, the most backward person intellectually is on the same level as the greatest genius. Thank God, we can all love, however small our gifts may be, however sunk we may have been in iniquity at one time before conversion. In a natural sense love is more universal than intellect; and in the Christian life the same holds good. So our blessed Lord was able to say, ‘I thank thee, O Father, Lord of heaven and earth, that thou hast hid these things from the wise and prudent, and hast revealed them unto babes: even so, Father; for so it seemed good in thy sight’ (Matt 11:25-26). Nothing is more glorious in the Christian message and faith than the fact that God has chosen to make this central. Other things are of great value, but at this most central point they fail. Here, He postulates something that is common to all, the capacity for love. So when the Lord enters the soul, and strengthens it with His might, it is rendered capable of knowing and comprehending ‘the love of Christ which passeth knowledge’. And this, thank God, applies to all saints.

And one last quote, this one commenting on 3:18:

We must learn to seek the Lord himself. I mean that we must not be content with ideas concerning Him, or with propositions about Him. Once more it is essential that we should emphasize that while doctrines and theology and understanding are absolutely vital to the Christian, it is always wrong to stop at these alone. We must go beyond them and realize that the purpose of all knowledge of doctrine is to bring us to a knowledge of the Person of Christ. As we have seen, ‘That I might know him and the power of His resurrection’ was the ambition of the greatest doctrinal, theological teacher and preacher the Church has ever known. Without knowledge of doctrine we may become victims of a false mysticism, or simply remain babes in Christ. In order to be strong, and grow, and become virile and powerful, an understanding of truth is essential to us. But that should lead us to seek a knowledge of the Person Himself.

4 Replies to “Lloyd-Jones and Our Riches in Christ”