The Christian needs both brains and the Spirit to rightly understand Scripture:

All Christians believe that God speaks to us through the Bible – not just in the sense that Scripture contains God’s propositional truth for us, but that God will seem to speak straight to our hearts or spirits at times. We say that a verse just ‘leapt off the page’ and powerfully spoke to us as we were reading. That is, the Holy Spirit will take a portion of the truth of God and quicken it to the believer. 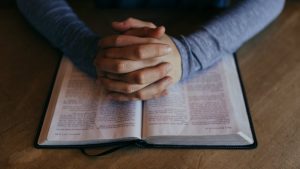 This can happen while reading the Word in your daily devotionals, or while listening to a sermon, or in various other ways. Christians do not believe that reading or hearing Scripture is just a dry academic exercise, with no hope of a divine-human encounter. We believe that God meets with us through his Word, and often various parts of it will become highlighted by illumination of the Spirit. He will convict us of things, or provide clarity on a text, or bring assurance or hope or conviction as needed.

The Bible is not just an academic treatise to be interpreted academically – it is also a spiritual book to be approached and understood spiritually. So mere human ingenuity and intelligence alone does not unlock its treasures: a humble heart, an obedient spirit, and the work of the Holy Spirit all combine to make the truths of Scripture ‘come alive’ to us.

So we read it carefully and rationally, and employ normal hermeneutical principles, but we also allow the Holy Spirit to guide us in what we read, and lead us into all truth. I say all this because of a recent discussion on the social media with a good friend who would fully concur with me on all that I have been saying. He had been posting some ‘bare’ Scripture passages online, without even the biblical reference. Nothing wrong with that of course.

One such passage which is a neat passage – but can also, like so many, be quite twisted if wrested out of context – is Jeremiah 29:11. I responded by saying it is indeed a terrific passage, but often folks ignore its context. I offered a link to a piece I had written on it: billmuehlenberg.com/2015/08/27/difficult-bible-passages-jeremiah-2911/

In fact, I have written another article on this passage; billmuehlenberg.com/2016/08/19/jeremiah-2911-health-wealth-gospel/

Just as he was well-intentioned in posting the verse, so was I in posting the link. And he came back later with a response, explaining why he was doing this – to encourage us in dark times. And he said that my “Difficult Bible Passages” articles are always of good value. He finished by saying this: “But sometimes it is good to just let the scripture speak to us, to let the Spirit take His word and minister it to us.”

Again, we are on the same page here, and we both know that context and proper hermeneutics matter, and they matter immensely. And we also both know that we need the illumination of the Holy Spirit to help make the Word ‘come alive.’ Maybe it’s the teacher in me, but a thought did come to mind when I read that: ‘Just how far can we go with this – without running with any immediate context?’

Based on all that I have already said, it should be obvious by now how I would respond: yes it can be done – but care is always needed. By God’s grace a Christian can have the Spirit ‘speak to him’ in all sorts of circumstances – even if a cultist or an atheist shares some Scripture. So yes, a bit of biblical text all by itself can become words of life to the believer. No probs.

But we also understand that the normal means by which we share and receive the Word is by doing it in context, knowing that some of the most destructive heresies and diabolical deceptions have happened when folks recklessly rip a passage out of context, and do not compare Scripture with Scripture. Cultists and heretics are always doing this sort of thing.

As always, getting the biblical balance right is very much needed here. Just a rationalistic, fleshly reading of Scripture with no dependence on the Holy Spirit, no humility, and no intention of obeying its commands and submitting to its claims will get you nowhere.

But throwing out your brains, refusing to utilise basic principles of interpretation, ignoring the context, and not being willing to learn from others is also no good. This ‘Spirit-only’ type of Christianity is a recipe for disaster. I have spoken about this before. In a piece I wrote ten years ago on the importance of commentaries I dealt with this at length. Let me share some of that article here:

Indeed, there are all sorts of things we will miss, or misunderstand, if we do not have a few basic study tools around, such as a Bible dictionary, a Bible atlas, and some commentaries. There are all sorts of passages which are simply not all that clear, and some background information can really help to clear things up.

Consider just one example of many. What does David mean for example in Psalm 51:7: “Cleanse me with hyssop, and I will be clean”? We will not understand the meaning of this very well if we do not know what hyssop is. Hyssop was a small plant found in the Ancient Near East that was used in the sacrifices of temple worship. It served as a brush to sprinkle blood on the worshippers. Thus it spoke of sacrifice and the atonement of sin. Having that little bit of background information can greatly help us understand what the author was trying to communicate.

The truth is, the Bible is both a human and a divine book. Because it is a human text, we can apply the same rules for interpretation that we do to other texts. But because it is a divine book, we also need the aid of the Holy Spirit to fully understand God’s truth.

As John Stott noted, God chose human language to reveal himself: “As a result, although Scripture is unlike all other books in being the word of God, it is also like all other books in being the words of men. Since it is unique because divine, we must study it like no other book, praying to the Holy Spirit for illumination. Since it is ordinary because human, we must study it like every other book, paying attention to the common rules of vocabulary, grammar and syntax.”

Commentaries can help us do this. They can especially be helpful in helping to more fully unlock the depth of the original Hebrew and Greek. And they also cite older Christian commentators, preachers and teachers, who also provide a wealth of insight and understanding.

Indeed, we need to learn from those who have gone before. It is arrogant in the extreme to simply ignore two thousand years of church history, and all that God has taught his people over the centuries. In fact, problems often arise when we separate ourselves from history and tradition.

Knowledge of church history shows the history of faulty interpretation and heretical teachings. We need to learn from history. As Santayana once said, those who do not learn from history are doomed to repeat its mistakes. Or as Alister McGrath has noted: “Evangelicals have always been prone to read Scripture as if they were the first to do so. We need to be reminded that others have been there before us, and have read it before us.” billmuehlenberg.com/2010/07/14/who-needs-commentaries/

So the good news is, by maintaining proper biblical balance, we can have a good intellectual understanding of what the Word teaches, but because of the indwelling Holy Spirit we can have the biblical message take deep root in our hearts and energise us to do God’s will and bring him glory.

5 Replies to “Scripture, Reason, and the Holy Spirit”