Here are 25 gems from the great Christian apologist:

Having just passed away at age 74 after nearly a half century of ministry, Ravi Zacharias has left us such a rich legacy, and a wealth of important Christian thinking and reflection. I have already penned a piece on his life and work, offering some quotes of his. See here: billmuehlenberg.com/2020/05/19/vale-ravi-zacharias/

But as I have been doing of late, with folks like Thomas Sowell, I am pulling all the author’s works off my shelves, giving them a brief reread, and lifting just one quote from each. So here I do the same with the great Christian apologist Ravi Zacharias. 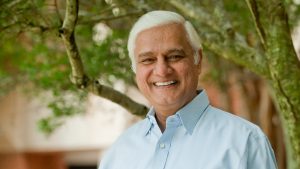 Here then are 25 quotes from the 25 books by Zacharias that I have. I present them in order of when the book was released:

“In this study of atheism we have seen the logical contradictions it embraces, the existential hell it creates, and the vacuous pronouncements it makes. This manifold vulnerability is what provoked the acerbic remark that atheism has a greater capacity to smell rotten eggs than to lay good ones, or to attack other systems than to defend its own.” A Shattered Visage (1990, p. 185)

“A serious casualty of our time that defies comprehension is the death of truth. By denying absolutes and eradicating all points of reference by which we test veracity, our civilization has entered terra incognita on matters of the greatest importance even for survival.” Can Man Live Without God? (1994, p. 229)

“The grandeur of the gospel strikes deep into the soul of wickedness because it offers not merely an analysis of the condition nor just the strength to do what is right; it goes to our innermost being, where the work of God changes what we want to do. This is not an ethical system calling us to civility. This is the transforming work of the grace of God, who then deigns to call us His children.” Deliver Us From Evil (1996, p. 185)

“Sin scorches us most after we receive the grace of forgiveness, not before. The forgiven one realizes the gravity of the sin more when he or she is genuinely repentant and has been forgiven. God beckons our crying hearts to come to Him in repentance. This makes our sin forgivable.” Cries of the Heart (1998, p. 116)

“Jesus and Buddha cannot both be right. The lotus is the symbol of Buddhism; the cross. the symbol of the Christian faith. Behind the two symbols stand two diametrically opposed beliefs.” The Lotus and the Cross (2001, p. 8)

“[Jesus] sought no political power because control is not the same thing as reverence. He told us to set our eyes not upon bricks and mortar, but upon a city whose builder and maker is God. He seeks to dwell not in buildings made with hands, but in the hearts of men and women. The Christian faith is not about land or a place. It is about a relationship.” Light in the Shadow of Jihad (2002, p. 75)

“The philosopher can’t take you to God. There’s a limitation to reason. The heart flees even when reason counters it, because it doesn’t wish to belong to anything that results in a surrender of self.” Sense and Sensuality (2002, p. 77)

“Ultimately nothing can kill the truth. Our society lives with the fallacy that truth is an illusion and has put truth on the scaffold. But that scaffold inexorably sways the future, and in the day we all stand before God, all illusions will collapse, leaving only truth standing alive and strong.” Recapture the Wonder (2003, p. 104)

“Love is hard work. I would carry it one step further. It is the hardest work I know of, work from which you are never entitled to take a vacation.” I, Isaac Take Thee, Rebekah (2004, p. 31)

“Augustine warned that it is not wise to judge a philosophy by its abuse. But the domination of the strong over the weak is not the abuse of natural selection; it is at the heart of it. Hitler unintentionally exposed atheism and dragged it where it was reluctantly, but logically, forced into its consequences.” The Real Face of Atheism (Revised version of A Shattered Visage, 1990, 2004, p. 63)

“Apologetics is not just giving answers to questions — it is questioning people’s answers, and even questioning their questions. When you question someone’s question, you compel them to open up about their own assumptions. Our assumptions must be examined.” Walking from East to West (2006, p. 204)

“Can you explain to me why if a plane were to crash and some die while others live, that a skeptic calls into question God’s moral nature if he at his whim chooses some to live and others to die; yet when it is your choice to allow a child within you to live or die, it is your moral right to make that determination? Does that not sound odd to you? When God decides, he is immoral. When you or I decide, it is our right.” Beyond Opinion (Edited by Zacharias, 2007, p. 188)

“Once you begin to see God’s hand in your life, you will know that his workmanship within you and through you was tailor-made, just for you. His design for your life pulls together every thread of your existence into a magnificent work of art. Every thread matters and has a specific purpose.” The Grand Weaver: How God Shapes Us Through the Events of Our Lives (2007, p. 17)

“God has disclosed himself in descriptive terms that give us enough information to be able to know who he is, and he has hidden enough of himself for us to learn the balance between faith and reason. No earthly relationship with an infinite, transcendent God can exist without maintaining these two aspects.” Has Christianity Failed You? (2010, p. 23)

“Everything the New Spiritualists say they are seeking is actually found in Jesus. No, not the Jesus of popular television marketing. Not the Jesus of the New Ager’s imagination. And not the Jesus of all talk and no walk, who is heard but never seen. The Jesus I am talking about is the Ultimate Reality who became flesh to bring us grace and truth that we might become the children of God.” Why Jesus? (2012, pp. 57-58)

“Relativism becomes the quicksand of humanism, and meaning is also destroyed because one cannot find security based on a value-less culture, defined by a value-less individual.” Jesus Among Secular Gods (With Vince Vitale, 2017, p. 170)

“Oddly enough, in history the most questioning and the resistant became God’s mouthpieces to skeptics. Consider Peter, Paul, and Thomas—just to name a few. They questioned, they wrestled, they challenged. But once convinced, they spoke and wrote and persuaded people in the most difficult of circumstances.” The Logic of God (2019, p. 123)

“You cannot take Jesus out of the gospel story and still have the gospel. No Jesus, no gospel.” Seeing Jesus From the East (With Abdu Murray, 2020, p. 29)

Writing a few days before he passed away, Robert Knight said this about him: “If C.S. Lewis was the greatest Christian expositor of the 20th century, Ravi Zacharias might well go down in history as the greatest of the 21st century. . . . Like C.S. Lewis, when he does depart, Ravi Zacharias will have left us with a cache of illuminating works whose insights will stand the test of time.” www.washingtontimes.com/news/2020/may/17/ravi-zacharias-may-be-the-greatest-christian-expos/

Amen to that. We miss you already brother Ravi.

(Australians will find many of his books at Koorong.)