Here are some aids to assist you as you study Nehemiah:

Nehemiah continues the story we find recorded in the book of Ezra. Just as with Samuel, Kings and Chronicles, Ezra and Nehemiah were originally one book in the Hebrew Bible. They both tell one story which covers a period of around a century. Peter Adam provides a bit of background to the two books:

The books are structured around the return of three groups of exiles from Babylon to Jerusalem; the first in Ezra 1–6, the second in Ezra 7–10, and the third in Nehemiah 1–13. These people returned by God’s grace, and also by the decision of the King of Persia; the first group by permission of King Cyrus, and the second and third groups by command of King Artaxerxes. All faced problems from within God’s people, and opposition from outside God’s people. Nevertheless, God succeeded in bringing his people back to their land and their city, Jerusalem. At a deeper level, the books are about the power of the word of God, and the ministry of Ezra and Nehemiah in encouraging God’s people to walk in God’s words. 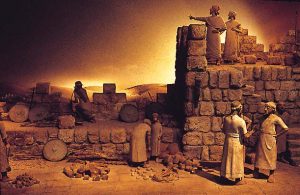 Henrietta Mears offers us some of the similarities between the two books:

Both books begin at Persia and end at Jerusalem.
Both center around the man of God who wrote them.
Both begin with a Persian king’s decree.
Both tell of building as their chief theme.
Both books contain a long prayer of humiliation and confession in the ninth chapter.
Both end with the purification of the people.

Various authors have highlighted the ability of Nehemiah as a leader, and the characteristics of his leadership. There is much to be learned here. James Montgomery Boice for example offers us four key aspects of his leadership: his submission to God; his ability to focus on the right goals; his wisdom in handling complex situations; and his courage to act decisively.

Mark Roberts comments on how both Ezra and Nehemiah were clear examples of successful leadership:

In Ezra and Nehemiah we have observed outstanding leadership. Both men moved a nation into a season of rebuilding and renewal, and both experienced measurable success in their efforts. Ezra taught the people to obey the law, and Nehemiah led the people to rebuild Jerusalem’s fallen wall. Together, Ezra and Nehemiah oversaw a fundamental renewal of the covenant between God and His chosen nation.

In his book on Nehemiah, J. I. Packer says this about the book and the man:

We all can learn practical lessons about biblical leadership from Nehemiah. Mark Dever in his 2006 volume, The Message of the Old Testament says this about the matter: “What kind of leadership does the Bible present as exemplary?  Even more concisely, what is godly leadership?  This question will help guide us through the book of Nehemiah, where we will note eight aspects of godly leadership.”

In some 20 pages he examines these points, but I can only offer the heading of each one here:

Earlier I penned a piece looking at some of the spiritual lessons to be found in the book of Nehemiah. As I said in that piece, a major theme we find there is we must both pray and work:

The work of God must be done in practical terms (we must do something) but it also must be buttressed by prayer and spiritual warfare. Either one without the other will not get us very far. Working like mad without prayer cover is futile, but simply praying while doing nothing won’t get us very far either. We see this clearly spelled out of course in Neh. 4:16-23. billmuehlenberg.com/2014/06/17/nehemiah-doing-the-work-of-god/

Let me close by looking at just one passage and offering a bit of commentary on it. Neh. 6:15-16 says this: “So the wall was completed on the twenty-fifth of Elul, in fifty-two days. When all our enemies heard about this, all the surrounding nations were afraid and lost their self-confidence, because they realized that this work had been done with the help of our God.”

We should not lose sight of the fact that what is recorded here is not simply an interest piece for fans of the History Channel’s Engineering an Empire. This is the victory of the plan and purpose of God for his people. . . . Several things need to be noted.

First, this work was accomplished in the face of opposition on the part of Nehemiah’s enemies…

Second, one of the outcomes of this work was a great reversal of affairs: Israel’s enemies had tried to make Israel afraid, but instead it was they who became afraid (Neh. 6:16). Their balloon of pride was burst and their sense of self-importance deflated as they realized that God really was with these people in Jerusalem…

Third, Nehemiah’s enemies perceived that the Jews had accomplished their task “with the help of God” (Neh. 6:16). Human hands built the wall, and concurrently, as theologians sometimes put it, God built the wall. Men and women did it and God did it. This is the grammar of providence.

And I like what James Hamilton says about this:

This is Nehemiah’s perspective: that God has been aiding the work all along. (The HCSB’s rendering “by our God” means “with the help of our God,” ESV, NASB, NET.) God was at work on behalf of the people….

We want to be people who do things that can only be done because God is helping us. We don’t want to be people who do things that can be explained away by ordinary human effort. We don’t want the world to look at what we have done and say, “Anybody with financial means, market savvy, and cultural sensitivity could pull that off.” We don’t want that. We want people looking at our church, at our gospel efforts, and saying, “Only God could bring those people together. I knew some of those people before they got converted; only God could make them as loving as they are now.” We want people looking at us and being shocked that so many people of such disparate backgrounds and interests love one another the way we do. Only God can do this. Only God can produce true conversion.

Quite right. May you be blessed as you read through this book and see what God is able to do with those whose hearts are right with him.