Here is some help for your study of the book of Ezra:

Ezra and Nehemiah were originally one book, broken up sometime during the early church. Along with Esther, these make up the final three historical books which appear just before the Wisdom literature. Ezra and Nehemiah tell the story of the return from exile, the restoration of Jerusalem, and the rebuilding of the temple.

The previous books of Kings and Chronicles told the story of how Israel and Judah were subdued and taken into exile because of sin and disobedience. Judah’s 70 years of captivity in Babylon now comes to an end with some of the Jews returning home.

The three key leaders here were Zerubbabel, who rebuilt the temple; Ezra, who spiritually ministered to the Jewish people; and Nehemiah, who rebuilt the wall around Jerusalem. A rough timeline would include these approximate dates: 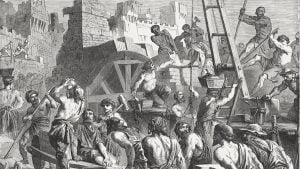 James Hamilton notes how the 10 chapters of Ezra can be outlined: “Ezra falls nicely into two parts. The first part, chapters 1-6, covers 80 years and concludes with the rebuilding of the temple. The second part takes place in just one year and concludes with the people sending away foreign wives. Both parts begin with a Persian decree, contain a list of returnees, and continue with an account of opposition overcome.”

The importance of the rebuilding of the temple should not be lost on modern readers. Matthew Levering offers these insights:

We must reclaim a positive vision of the deeds recorded in Ezra as the ongoing and powerful activity of God in Israel. The book of Ezra begins with the return to the land to rebuild the temple. Because of the Edenic overtones that the reality of the covenantal land possesses, certainly this land cannot be what it is without the temple (as the locus of the promised divine indwelling); and yet the temple cannot be understood outside the land. The return to the land, therefore, is not a mere geographical journey: it is a new exodus that can be fulfilled only when the people arrive at a new temple, where once again the Lord’s Passover can be celebrated.

A major theme of both books is the sovereignty of God. Chris Wright has this to say about this topic:

The sovereignty of YHWH over all kings and empires on the one hand, and over very local situations on the other hand, is a theme throughout both books. It is assumed, and affirmed, and illustrated. . . . God has a way with human hearts – especially the hearts of those in power, as Pharaoh learned to his ultimate destruction. Human beings make their choices and declare their plans. But God ensures that sooner or later it is God’s will that is done on earth as it is in heaven.

In Ezra-Nehemiah, the interplay of divine sovereignty and freely chosen human decisions and actions is also drawn in more subtle colors. The “moving of hearts” is not confined to heads of states, but operates among heads of families as well. God moves their hearts to return, but they make the preparations to do so (Ezra 1:5). . . . Ezra’s awareness of the “hand of God” – a powerful metaphor for dramatic divine intervention—is mentioned five times.

And Douglas Nykolaishen also reminds us that while man and God are both involved in the work, ultimately it is God who should get the glory:

Every action contributing to the return and rebuilding in Ezra 1, regardless of who performs it, is depicted by the narrator as resulting ultimately from the action of God, whether directly through moving their hearts or indirectly through the decree of Cyrus. Moreover, the narrator presents details that remind readers of the events of the exodus from Egypt, in order to signify that what is happening in Ezra 1 is nothing less than the fulfillment of the prophetic expectation that God would bring his exiles back to the promised land as a second exodus (Jer. 16;14-15). But the second-exodus motif itself is part of the larger promise, which has its roots in Deuteronomy 30:1–10, that God will restore his covenant with his people after sending them into exile. Together, the emphasis on God’s initiative and the presentation of the events as the fulfillment of his promises encourage the postexilic community to believe that they are the heirs of what God himself has initiated, and that it is the renewal of the plan he had when he brought their ancestors out of Egypt. As God’s plan unfolds throughout history, his people can be sure that he is at work, achieving his aims.

Or as Derek Thomas puts it:

It may have been Cyrus who issued a decree for the Jews to return to Jerusalem; from another—and far more important—point of view, it was the Lord’s doing. Man proposes, God disposes. Thus, the author of the first chapter of Ezra makes it very plain indeed: “the Lord stirred up the spirit of Cyrus” (Ezra 1:1). God did it! At no point did the Lord abandon his control.

Further thoughts on this by Hamilton are worth offering here:

For more theological and devotional thoughts on Ezra, see this earlier piece of mine: billmuehlenberg.com/2019/05/26/nuggets-from-the-book-of-ezra/

And for some thoughts on Ezra the teacher, see here: billmuehlenberg.com/2020/05/18/on-teaching/

In that article I discussed Ezra 7:6 and 10: “Ezra went up from Babylonia. He was a scribe skilled in the Law of Moses that the Lord, the God of Israel, had given, and the king granted him all that he asked, for the hand of the Lord his God was on him. . . . Ezra had set his heart to study the Law of the Lord, and to do it and to teach his statutes and rules in Israel.”

I offered some commentary by Peter Adam there on those verses, but let me offer a bit more – this from Robert Fyall: “Ezra is in no doubt that the most important agent at work is the living word of God. We need to recapture that confidence. Above and beyond all the attempts to grapple with postmodernism and exploring new was of ‘being church’ we have to believe in the life-changing nature of God’s word. More than that, we have to believe that the same word controls and directs history.”

One last matter can briefly be pointed out here. Some might find the emphasis found in Ezra 9-10 on rebuking those with intermarriages to foreigners and the need to end those marriages rather concerning. Much can be said on this, but a few words from Mark Dever will have to suffice:

Does this mean that repentance requires Christians married to non-Christian spouses to divorce them? Not at all. Both the apostles Paul and Peter address the Christian married to a non-Christian, and neither of them tells such an individual to seek a divorce (1 Cor. 7:12-16; 1 Pet. 3:1-2). Since the coming of Christ in the first century, God’s people are no longer tied to a particular nation or ethnicity, as they were in Old Testament times.

Israel, on the other hand, was to maintain this separate nation status, marked and specially formed by God’s Word in preparation for the coming of God’s Messiah. Leading the Israelites out of these marriages to foreign wives was leading them, in a sense, out of exile. The people remained in exile as long as they kept their homes divided. So, these marriages, like the geography, were simply illustrative, pedagogical, and preparatory. Jerusalem existed to remind them of God’s faithfulness, of their sin, and of God’s mercy. Their repentance was their real restoration.