Psalm 2 offers us great news as we think of the murderous thugs ruling the earth right now:

Consider all the evil dictators, murderous rulers, and diabolical tyrants that people have had to endure over the years. They have terrorised their own populations, enslaved the masses, and killed millions of people. During the past hundred years alone, various godless regimes have been responsible for over 100 million deaths.

Most of these were God-haters who thought they could take the place of the Almighty. While most of them are now history (some remain, as in North Korea and China), they have left a devilish legacy of death and destruction. I look at some of this in more detail here: billmuehlenberg.com/2014/02/08/atheism-government-and-killing/ 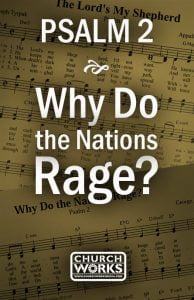 Closer to home, and on a smaller scale – but still a genuine worry – are various leftist political leaders who sanction, condone and celebrate things like the legalised killing of millions of unborn babies each year. Or think of various Democrat governors and mayors in America who have ordered churches to shut down and have had grandmothers arrested and fined for sitting on park benches – ostensibly to stop the spread of coronavirus.

Yet these very same leftist leaders seem to have happily given the green light to rioters, looters and arsonists who are intent on destroying their cities. In Australia we have similar scenarios played out, with massive leftist marches given the OK for this weekend in Melbourne and other cities by Labor leaders who still think that open churches are a threat to the community. So much for social distancing and corona concerns.

I don’t know about you, but all these things grieve me deeply and bother me greatly. Indeed, in the light of all this, how is the Christian to respond? What help, hope and comfort can we get from God as we reflect on these matters? Is there a sure word from the Lord that can comfort us and encourage us as all this takes place?

There is indeed. Here I want to look at just one such word. Psalm 2 is known as a royal psalm, and it speaks of the reign of the Lord’s Anointed. It of course looks forward to the ideal king, Jesus. It contains four equal sections of three verses each. It is just the first half of the psalm that I want to discuss here. These six verses say this:

Why do the nations rage
and the peoples plot in vain?
The kings of the earth set themselves,
and the rulers take counsel together,
against the Lord and against his Anointed, saying,
“Let us burst their bonds apart
and cast away their cords from us.”

He who sits in the heavens laughs;
the Lord holds them in derision.
Then he will speak to them in his wrath,
and terrify them in his fury, saying,
“As for me, I have set my King
on Zion, my holy hill.”

That is all good news to me. In the face of all the ungodly, arrogant and defiant rulers who are out there, it is great to get the divine perspective on them. It is reassuring to know how their days are numbered and God is not surprised about them nor indifferent to them.

Let me offer some commentary on these verses to help amplify the good news that they contain. Peter Craigie offers some background to the psalm:

The coronation of a king marks the accession of a person to a position of power and authority; for the Davidic kings, that power and authority were received from God and exercised under his dominion. It is against this background of divine and regal authority that the opening words of the psalm must be read. The nations of the world, their warriors and rulers, are gathering together in an act of rebellion against God and the king.

While earthly rulers are in view here, James Montgomery Boice is quite right to remind us that “we cannot understand this psalm until we realize that it is an expression of the rebellion of the human heart against God and not a limited revolt of some merely human Near Eastern king or kings against David or his successors.”

A comment by Donald Williams demonstrates how their sin is really the same as our sin: “They no longer want to be submissive to God, His King, or His kingdom. They see submission to God as bondage and His sovereignty as restrictive, His will as demeaning. The nations want autonomy; they want freedom. Responding to the serpent’s whisper to Eve in the garden, they want to be like God (Gen. 3:5). They want to be their own God.”

And as James Johnson rightly points out, it is not just any old god that people hate: “The world has not set itself against the idea of God in general. In fact, people around the world are usually religious. By nature, though, we are against the God who has revealed himself in Jesus Christ. Human beings across the globe are offended by the God of the Bible, and we rage against him.”

The response of God to this human mutiny and idiocy is well captured by Gerald Wilson:

Yahweh is not unaware of the squabbling and dissatisfaction inhabiting the fringes of his courtroom. The coalescing plots are transparent to him, but he is unafraid. The description of God as “enthroned in heaven” is not an attempt to stress his distance and removal from the fray. It is a sign of his exaltation and power that is “out of this world.” How can these puny, earthbound “kings of the earth” (2:2) presume to reject and resist the rightful authority of the creator God who sits enthroned in heaven over all the earth?

The enthroned God sees these human beings, knows their plots and pretensions, and is unconcerned. Like an earthly monarch facing down his opponents, God “laughs” and “scoffs”. Although we may not find the psalmist’s chosen imagery of a laughing, scoffing God appealing, the intended message remains clear: God’s power is so great and his position so secure that he need not take any coalition of human powers as serious threats to his rule.

Or as Boice comments:

What is God’s reaction to the haughty words of these pygmy human rulers? God does not tremble. He does not hide behind some vast celestial rampart, counting the enemy and calculating whether or not he has sufficient force to counter this new challenge to his kingdom. He does not even rise from where he is sitting. He “laughs” at these great imbeciles….

It is a laugh of derision, as the next verse shows: “the Lord scoffs at them” (v. 4). That is what human attempts to throw off the rule of the sovereign God deserve. It is understandable that sinners should want to reject God’s rule. That is what sin is: a repudiation of God’s rule and standards in favor of one’s own will. But although understandable, the folly of this attempt surpasses belief. How can mere human beings expect to get rid of God?

And one more: I like the way Dale Ralph Davis puts it:

God is not fazed! The mighty politicians, the dictators in their military fatigues, the terrorists with their bomb loads strapped to their backs – God is unimpressed. If you have imbibed a western sentimental view of God as the great soupy softie in the sky, then you will not understand this picture of verse 4. In fact, it will likely ‘offend’ you. But the psalm implies that nations may strut out their nuclear bombs – it only convulses the Almighty in laughter! To think that a few swaggering sovereigns could destroy God’s kingdom with such trifles! After you hear the kings in verse 3, you need to see this picture of the laughing God in verse 4, in order to get re-focused on the truth.

So as we see all around us disconcerting events and lamentable decisions being made by rulers, governments, tyrants and politicians, we need to keep this heavenly perspective always in mind. Their days are numbered. One day they will all bow the knee before the God they have rejected in this life. And this is true of all unrepentant sinners, not just leaders and rulers.

Today is a day where the Kim Jong-uns of the world – as well as the average Joes – can repent of their folly and bow the knee to the one true sovereign. If they do not do it willingly now, they will be forced to do it in the next life. In the meantime, Christians can rejoice that the King of Kings laughs at the rebellious misotheists of today.