A remarkable evangelical teacher and theologian has just passed away:

One of the greatest and most influential evangelical leaders of our time has just passed away at 93 years of age. James Innell Packer was certainly one of the leading lights of English and North American evangelicalism over the past century, along with other greats such as Carl F. H. Henry, John Stott and Martyn Lloyd Jones.

He was, as Alister McGrath said, “one of the theological and spiritual giants of the twentieth century. His rare combination of theological competence, spiritual wisdom and a clear and accessible style of writing places him alongside the great spiritual writers of the evangelical tradition, such as John Owen, Richard Baxter, Jonathan Edwards and J.C. Ryle.” 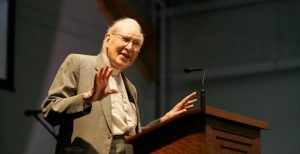 The life-long Anglican educator and theologian was born in the UK in 1926, and almost died from an accident with a passing vehicle at age seven. Another providential episode in his life was receiving a typewriter, instead of a bicycle, on his eleventh birthday. He put that to good use, and it set him up for his Christian calling for the rest of his life.

In 1944 he went to Oxford University, where he committed his life to Christ on October 22. Another providential event occurred as he worked as a librarian for the Oxford Inter-Collegiate Christian Union. A supply of books was donated, and as he sorted through them, he came upon the 24-volume set of the works of the great Puritan theologian, John Owen.

This was to change his life forever, and he became a great lover and promoter of the Puritans. The Puritans, said Packer, taught him, that “all theology is also spirituality”. He completed his BA in 1948, and his 500-page PhD thesis on Puritan Richard Baxter was completed in 1954. He said this about Puritanism in his study of Baxter:

Puritanism was a total view of Christianity, Bible-based, church-centered, God-honouring, literate, orthodox, pastoral, and reformational, that saw personal, domestic, professional, political, churchly, and economic existence as aspects of a single whole, and that called on everybody to order every department and every relationship of their life according to the Word of God, so that all would be sanctified and become holiness to the Lord.

With the aid of Martyn Lloyd-Jones he established the annual Puritan Studies Conference in 1950. He married ‘Kit’ Mullett in 1954, and they adopted three children. He lectured in theology at Tyndale Hall in Bristol from 1955–1961. From 1961-1970 he worked at Latimer House, Oxford. And from 1970 -1979 he returned to Tyndale Hall, which became Trinity College in 1972.

He moved to Vancouver in 1979 where he has lived for the past four decades. He became Professor of Historical and Systematic Theology at Regent College, and also continued a very active speaking and writing schedule. He was the General Editor of the English Standard Version of the Bible, which was published in 2001.

Sadly, major eye damage occurred over Christmas 2015. When asked if he was discouraged about losing his ability to read, write and preach he said:

I don’t see how any Christian under any circumstances can’t be encouraged who focuses on God. I don’t see how any Christian can be discouraged, because God is in charge – God knows what he’s doing, all things work together for good for those who are called according to his purpose (Rom. 8:28), and our hope is in Christ. Those things don’t change, and those are the things to focus on.

Of interest, a year earlier he released a little book entitled Finishing Our Course with Joy (Crossway). The book is subtitled, “Guidance from God for Engaging with Our Aging.” The truths and wisdom found in the book reflect a life well-lived for Christ, even in the golden years of life.

He passed away on Friday July 17.

Packer was known as a peacemaker, and was often called upon to mediate between conflicting parties and in divisive situations. But he was not one to back away from controversy when necessary. Five episodes come to mind here. The first was the famous split between Lloyd-Jones and John Stott in October 1966.

The great preacher from Westminster Chapel had urged evangelicals to leave liberal denominations, but Stott encouraged them to stay. Packer sided with Stott on this, and sadly both men lost a fair degree of favour with Lloyd-Jones and his camp as a result, especially Packer. And when Packer co-authored a work with another evangelical and two Anglo-Catholics in 1970 (Growing into Union), the break became complete, and the Puritan conferences came to an end.

Two hot potato issues of the 70s and 80s also involved Packer. On the issue of the ordination of women, he felt that Scripture did not allow for it, and as to the rise of the charismatic movement, he sought to take a mediating position between the pro and con positions.

He was also involved in the ‘Evangelicals and Catholics Together’ initiative of Chuck Colson and Richard John Neuhaus. This 1994 document, and his support of it, also disturbed some evangelicals. Of course he always insisted this was not a church unity thing, but a parachurch collaborative matter. And he claimed he could never become a Catholic for various key theological reasons.

A fifth conflict occurred in June of 2002 when Packer and some others walked out of the synod of the Anglican Diocese of New Westminster because of its decision to bless homosexual unions. A few months later he wrote a piece for Christianity Today explaining his reasons for this. It began:

“Why did I walk out with the others? Because this decision, taken in its context, falsifies the gospel of Christ, abandons the authority of Scripture, jeopardizes the salvation of fellow human beings, and betrays the church in its God-appointed role as the bastion and bulwark of divine truth.”

Packer is the author of numerous books and articles. Some of his more important volumes include:

What really put Packer on the Christian map was his runaway best seller, Knowing God, released in 1973. This is a tremendous compendium of biblical truth, emphasising both theological soundness and spiritual application. Four decades after its publication it has sold around two million copies.

Simply to offer a few quotes from it may best do it justice. In his foreword he says, “The conviction behind the book is that ignorance of God – ignorance both of his ways and of the practice of communion with him – lies at the root of much of the church’s weakness today.”

In his chapter on ‘The Study of God’ he quotes the 20-year-old Spurgeon: “The highest science, the loftiest speculation, the mightiest philosophy, which can ever engage the attention of a child of God, is the name, the nature, the person, the work, the doings, and the existence of the great God whom he calls his Father.”

In his chapter on ‘The Love of God’ he says this:

God’s love is holy love. The God whom Jesus made known is not a God who is indifferent to moral distinctions, but a God who loves righteousness and hates iniquity. . . . God’s love is stern, for it expresses holiness in the lover and seeks holiness for the beloved. Scripture does not allow us to suppose that because God is love we may look to him to confer happiness on people who will not seek holiness or to shield his loved ones from trouble when he knows that they need trouble to further their sanctification.

And in the chapter on “Sons of God” he writes: “The stress of the New Testament is not on the difficulty and danger of drawing near to the holy God, but on the boldness and confidence with which believers may approach Him: a boldness that springs directly from faith in Christ, and from the knowledge of His saving work.”

Around a decade ago Packer described his ministry this way:

I see myself primarily as an adult catechist, and in pursuit of that calling I formulate, teach, and preach from an evangelical catechetical syllabus conceived as follows:

This ten-point syllabus is the doctrinal substructure of evangelicalism as I know, teach, and seek to live and model it, and it would, I think, commend itself to all Protestants who have ever professed an evangelical identity.

Or as he said about himself several years ago:

If asked to profile myself at this stage of my life, I should begin by highlighting my ongoing sense of being called by God as a sinner saved by and owing everything to his grace, to serve his people as a minister-teacher who is as a communicator of life-giving Bible truth concerning the providence, goodness, and knowledge of the Father, Son and the Holy Spirit, and hereby a furtherer of spiritual formation and a helper of troubled souls. That sense of vocation has been with me since I was nineteen. vimeo.com/144500979

The two major biographies written about Packer are these:

The Ryken volume draws heavily upon McGrath’s, but both are excellent. In addition to the two biographies, there are other valuable books about Packer which are well worth getting. These include:

The volume edited by George contains a terrific set of essays about Packer, penned by a dozen heavyweights such as Mark Dever, Richard john Neuhaus, Carl Trueman, and Alister McGrath. Let me just offer the opening words of one of them, Paul R. House:

J. I. Packer has had an extraordinary ministry by any reasonable standard of measure. He has been a scholar, teacher, writer, leader, ecumenicist, apologist, preacher, Bible translator, and conference speaker. He has had a significant part in removing the Puritans from obscurity, helping evangelicalism grow intellectually and spiritually, and teaching believers from many Christian traditions sound doctrine that leads to godly living. The fact that he has now served in these and other ways for over five decades also points to a gritty perseverance that pervades his character.

But all the volumes listed above are quite useful to gain a greater understanding and appreciation of this giant of a saint. And if you can’t afford all his individual volumes, something like this can be helpful as a Packer starter kit: Alister McGrath, The J. I. Packer Collection (IVP, 1999).

Also, for die-hard fans, his shorter pieces have been gathered into the 4-volume Collected Shorter Writings of J. I. Packer (Paternoster, 1998-2002):

The above is a hardback set which is now out of print and harder to find. But a newer paperback set of these four books have since appeared. They are (in the order matching the above):