Christian, are you wasting your life on that which does not matter?

It is extremely easy to focus exclusively on the here and now. But it is hard to think about, and live for, eternity. We will all live forever, in one of two destinations. This life is but a vapour, a wisp of smoke. Christians of all people should be living in light of eternity. But are we? 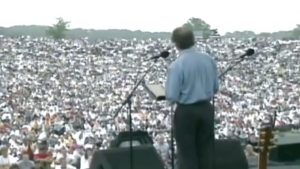 Let me speak to this by looking back somewhat. Twenty years ago, on May 20, a life-changing talk was given by a well-known American evangelical pastor. Three years ago on May 20 I wrote an article on this famous message: billmuehlenberg.com/2017/05/20/are-you-wasting-your-life/

I want to revisit both today. The talk was called “Boasting Only in the Cross” and was delivered by John Piper. You can watch the video and listen to the 38-minute message – as well as read it – here: www.desiringgod.org/messages/boasting-only-in-the-cross

It was a stirring talk given to a large group of young people as to how they were living their lives, and what it is that matters most. Piper challenged them to dwell on eternity, and to consider that they all would have to give an account one day of how they lived their lives. The start of his talk goes like this:

You don’t have to know a lot of things for your life to make a lasting difference in the world. But you do have to know the few great things that matter, and then be willing to live for them and die for them. The people that make a durable difference in the world are not the people who have mastered many things, but who have been mastered by a few great things.

But I know that not everybody in this crowd wants their life to make a difference. There are hundreds of you — you don’t care whether you make a lasting difference for something great, you just want people to like you. If people would just like you, you’d be satisfied. Or if you could just have a good job with a good wife and a couple of good kids and a nice car and long weekends and a few good friends, a fun retirement, and quick and easy death and no hell — if you could have that, you’d be satisfied even without God.

That is a tragedy in the making.

Three weeks ago, we got word at our church that Ruby Eliason and Laura Edwards had both been killed in Cameroon. Ruby was over eighty. Single all her life, she poured it out for one great thing: to make Jesus Christ known among the unreached, the poor, and the sick. Laura was a widow, a medical doctor, pushing eighty years old, and serving at Ruby’s side in Cameroon.

The brakes give way, over the cliff they go, and they’re gone — killed instantly.

And I asked my people: was that a tragedy? Two lives, driven by one great vision, spent in unheralded service to the perishing poor for the glory of Jesus Christ — two decades after almost all their American counterparts have retired to throw their lives away on trifles in Florida or New Mexico. No. That is not a tragedy. That is a glory.

I tell you what a tragedy is. I’ll read to you from Reader’s Digest what a tragedy is. “Bob and Penny . . . took early retirement from their jobs in the Northeast five years ago when he was 59 and she was 51. Now they live in Punta Gorda, Florida, where they cruise on their thirty foot trawler, playing softball and collecting shells.”

That’s a tragedy. And people today are spending billions of dollars to persuade you to embrace that tragic dream. And I get forty minutes to plead with you: don’t buy it. With all my heart I plead with you: don’t buy that dream. The American Dream: a nice house, a nice car, a nice job, a nice family, a nice retirement, collecting shells as the last chapter before you stand before the Creator of the universe to give an account of what you did: “Here it is Lord — my shell collection! And I’ve got a nice swing, and look at my boat!”

So influential was this message that in 2003 he produced a book on it entitled Don’t Waste Your Life (Crossway). It is still well worth getting, reading and meditating on. Let me quote a bit from this important volume. His heart for young people and how so many are wasting their lives shines through in this passage:

When I stand, as it were, on the shores of Iwo Jima and let myself reenact those hours of courage and sacrifice, and remember that they were young, I cannot make peace with the petty preoccupations of most American life. One of them was really young. I read his story and wanted to speak to every youth group in America and say, Do you want to see what cool is? Do you want to see something a thousand times more impressive than a triple double? Well, listen up about Jacklyn Lucas.

And here is his story:

He’d fast-talked his way into the Marines at fourteen, fooling the recruits with his muscled physique. . . . Assigned to drive a truck in Hawaii, he had grown frustrated; he wanted to fight. He stowed away on a transport out of Honolulu, surviving on food passed along to him by sympathetic leathernecks on board.

He landed on D-Day [at Iwo Jima] without a rifle. He grabbed one lying on the beach and fought his way inland. Now, on D+1, Jack and three comrades were crawling through a trench when eight Japanese sprang in front of them. Jack shot one of them through the head. Then his rifle jammed. As he struggled with it a grenade landed at his feet. He yelled a warning to the others and rammed the grenade into the soft ash. Immediately, another rolled in. Jack Lucas, seventeen, fell on both grenades. “Luke, you’re gonna die,” he remembered thinking. . . .

Aboard the hospital ship Samaritan the doctors could scarcely believe it. “Maybe he was too damned young and too damned tough to die,” one said. He endured twenty-one reconstructive operations and became the nation’s youngest Medal of Honor winner—and the only high school freshman to receive it.

As I read that, I thought of all the things that high school kids think is cool. I sat on the porch where I was reading and thought, O God, who will get in their face and give them something to live for? They waste their days in a trance of insignificance, trying to look cool or talk cool or walk cool. They don’t have a clue what cool is.

And his closing chapter includes these stirring words:

Christ has come into this mutinous world, which he made for his own glory, and paid for an amnesty with his own blood. Everyone who lays down the weaponry of unbelief will be absolved from all crimes against the Sovereign of the universe. By faith alone enemies will become happy subjects of an everlasting kingdom of justice and joy. Advancing this cause with Christ is worth your life.

No, you don’t have to be a missionary to admire and advance the great purposes of God to be known and praised and enjoyed among all peoples. But if you want to be most fully satisfied with God as he triumphs in the history of redemption, you can’t go on with business as usual—doing your work, making your money, giving your tithe, eating, sleeping, playing, and going to church. Instead you need to stop and go away for a few days with a Bible and notepad; and pray and think about how your particular time and place in life fits into the great purpose of God to make the nations glad in him. How will you join the great global purpose of God expressed in Psalm 67:4, “Let the nations be glad and sing for joy”?

Amen. What are you living for? Please, don’t waste your life.

11 Replies to “Please, Do Not Waste Your Life”