This passage has to do with the bigger and always rather difficult matter of how divine sovereignty can coexist with human responsibility. The verse speaks about how the disciples were left in the dark as to what Jesus was teaching them concerning his coming death. The question is, was this all their own fault, or was God behind their lack of understanding? 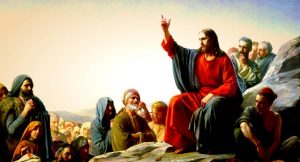 While everyone was marveling at all that Jesus did, he said to his disciples, “Listen carefully to what I am about to tell you: The Son of Man is going to be delivered into the hands of men.” But they did not understand what this meant. It was hidden from them, so that they did not grasp it, and they were afraid to ask him about it.

That was the NIV rendition. The ESV is similar, although it seems to more clearly imply some sort of divine concealment:

But while they were all marveling at everything he was doing, Jesus said to his disciples, “Let these words sink into your ears: The Son of Man is about to be delivered into the hands of men.” But they did not understand this saying, and it was concealed from them, so that they might not perceive it. And they were afraid to ask him about this saying.

How are we to understand this hiddenness or concealment? Did God specifically blind their eyes to what Jesus was saying, or was this just their own inability to really grasp what Jesus and his mission were all about? Or is it perhaps a bit of each?

So do we have a similar thing happening here with the disciples? It could well be the case. Some commentators think the disciples are primarily responsible for their lack of understanding. Others believe it was divine veiling or hiddenness at work. But as with the case of Pharaoh, there may be a bit of each going on here.

We find further discussion of these matters by Luke in chapter 8 where Jesus tells the disciples the parable of the sower and then discusses the purpose of the parables. In verses 9-10 we read: “And when his disciples asked him what this parable meant, he said, ‘To you it has been given to know the secrets of the kingdom of God, but for others they are in parables, so that “seeing they may not see, and hearing they may not understand”’.”

There Jesus states that God can either hide or reveal various truths to various people. To help us get a grasp of all this, let me appeal to one quite new and useful commentary on Luke written by F. Scott Spencer. I find his discussion of both passages to be helpful, so let me quote from him at length here. As to Luke 8, he says this:

Luke stresses that the fruitfulness of God’s word in this world depends on vigilant, faithful cultivation of the individual heart “ground” that receives this “sown” word in contested territory, a battleground with the devil, no less, littered with casualties (8:12)….

Further tension comes into play between divine revelation and human responsiveness. No one can “get” God’s word – in parable or otherwise – without being “given” understanding by God. While God’s faithful people receive the key to unlocking divine “mysteries,” they do not forge some secret gnostic society with only a select inner circle in the know and everyone else in the dark. Consider two points.

First, those given the key of knowledge must use it or lose it (cf. 8:18); they must persistently engage with the word and cultivate it toward fruitful ends….

Second, while many do not “get” the message on the first round, that doesn’t condemn them to permanent outsider status….

As to the text in Luke 9, he comments:

How can the disciples hope to hear the crux of Jesus’s message if their perceptual ears are plugged by God (implied in the divine passive)? More to the point, why does God not want them to perceive now? What purpose does concealment serve?

We tackled some of this taut tension between divine sovereignty and human responsibility in discussing 8:4–21, taking considerable comfort – after Jesus’s jolting assertion that he speaks in parables “so that ‘looking they may not perceive, and listening they may not understand’” (8:9-10, citing Isa. 6:9-10) – in his overriding claim that every “hidden” or “secret” mystery will be uncovered (Luke 8:17). God ultimately aims to reveal, not conceal. But that doesn’t preclude intermittent phases of divinely imposed blindness on the way to fuller insight. Saul of Tarsus provides the most dramatic example in Luke’s writings. After being struck by the lightning blast of the risen Christ, Saul “could see nothing” for three days (Acts 9:3-9). The confusion, helplessness, and fear of blindness overwhelm Saul until the Lord directs a Damascene disciple named Ananias to instruct and lay healing hands upon Saul (9:10-18). And even then, he still has much to learn about his new vocation….

Notions of Saul’s instantaneous, full-grown conversion, common in some popular theologies, do not fit the narrative of Acts or the nature of human experience. Spiritual knowledge does not come in some preformed, easy step-by-step module. One often has to go through some “dark night of the soul” to gain perspective and readiness to understand God’s truth.

Back to Jesus’s disciples in Luke. While the behavioral change they need doesn’t approach Saul’s violent extremism, the attitudinal change they require is just as dramatic: in their own way, they would have found the concept of a crucified Messiah and Son of Humankind as alien and repugnant before Jesus’s death as Saul does afterward. In both cases, that of the original apostles and of Saul/Paul, spiritual knowledge unfolds in personal encounters with the risen Christ after a period of imposed deafness/darkness preparing them for radically new perception.

I think Spencer offers us a helpful theological understanding here, and we can get some application of these truths to our own lives. For example, Christ does not usually show us early on in our Christian life all that we will go through, all the sacrifices we will make, or all the opposition we will face.

Sure, all of that is clearly presented in the teachings of Jesus, and it is true that Saul was told early on about all that he would have to suffer for the sake of Christ (Acts 9:16). But divine truths are generally revealed and embraced bit by bit. As an infant takes only small and safe amounts of food, so too the new Christian convert.

Finally, such a view on things should help keep us humble. If some Christians seem to have great understanding and insight into God’s word and divine truth, that is just as much – if not more – because of God’s graciousness to us as it is any hard work in study and research that we may be involved in.

Indeed, we all know of people who know heaps of theology yet seem to lack basic biblical understanding and lack a biblical lifestyle. And others may be rather unlearned when it comes to theological training yet seem to have real insights into the heart of God and what his word teaches.

As usual, we have a combination of divine sovereignty and human responsibility at work here. We must do all we can – in this case, to read, to study, to learn – but we give God the credit for any good fruit that comes out of it.