We should not want what we deserve – what we want and need is grace:

For some reason the word “merit” popped into my mind early this morning, so I reflected on it briefly, before moving on to other matters. But then my morning Scripture reading, coupled with a social media post, brought it back to me. So let me seek to tie all three of these events together here.

As to the “M” word, I thought of it in a religious context, knowing that it is both a noun and a verb. A quick online search offers us these definitions:

Noun – the quality of being particularly good or worthy, especially so as to deserve praise or reward.

Verb – deserve or be worthy of (reward, punishment, or attention). 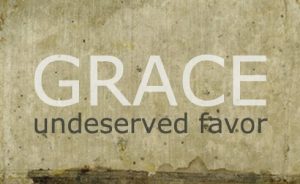 My reading in the Gospel of John made me reflect on these definitions as I kept finding Jesus challenging the religious leaders of the day. If anyone thought they deserved or earned or merited God’s favour, it was the Scribes and Pharisees. But Jesus had to continuously disavow them of this false notion.

Indeed, Jesus constantly made a distinction between those who really belonged to God and those who did not. As to these leaders, Jesus made it plain that God was NOT their father. Instead, as he said to them in John 8:44, “you are of your father the devil.”

This truth that not everyone is a true child of God is a core biblical teaching. The affirmation of two distinct humanities is found throughout John’s gospel. Here are just several passages worth recalling:

John 3:18 Whoever believes in him is not condemned, but whoever does not believe stands condemned already because they have not believed in the name of God’s one and only Son.

John 5:24 Truly, truly, I say to you, whoever hears my word and believes him who sent me has eternal life. He does not come into judgment, but has passed from death to life.

And to reinforce this idea that not all will partake of God’s favour, he emphasises how it is God who is at work here. As we read in John 6:60-65:

When many of his disciples heard it, they said, “This is a hard saying; who can listen to it?” But Jesus, knowing in himself that his disciples were grumbling about this, said to them, “Do you take offense at this? Then what if you were to see the Son of Man ascending to where he was before? It is the Spirit who gives life; the flesh is no help at all. The words that I have spoken to you are spirit and life. But there are some of you who do not believe.” (For Jesus knew from the beginning who those were who did not believe, and who it was who would betray him.) And he said, “This is why I told you that no one can come to me unless it is granted him by the Father.”

That God is ultimately the one to give credit to for our salvation – and everything else – is a theme found throughout Scripture. We read repeatedly for example that ancient Israel was chosen by God NOT because they merited it. Consider just one such passage, Deuteronomy 7:7-8:

The Lord did not set his affection on you and choose you because you were more numerous than other peoples, for you were the fewest of all peoples. But it was because the Lord loved you and kept the oath he swore to your ancestors that he brought you out with a mighty hand and redeemed you from the land of slavery, from the power of Pharaoh king of Egypt.

And of course so many others made the same point, including the Apostle Paul. As he said in Ephesians 2:8-9: “For by grace you have been saved through faith. And this is not your own doing; it is the gift of God, not a result of works, so that no one may boast.”

Indeed, when folks are dead in their trespasses and sins, they are in no position to do anything meritorious or to boast about anything. They can only cast themselves on the mercy and grace of God. Yet countless millions of folks somehow think they deserve to go to heaven and that they are somehow meritorious enough in themselves to please God.

Let me now bring in my third element from this morning: a post I saw on the social media. It was a quote from Michael Bloomberg, the former mayor of New York City and candidate in the 2020 Democratic presidential primaries.

The post had this quote of his: “I am telling you if there is a God, when I get to heaven I’m not stopping to be interviewed. I am heading straight in. I have earned my place in heaven. It’s not even close.” Wow. I did a quick net search and discovered that the quote is not new, but something he said back in 2014.

It is however a perfect example of what I have been discussing here. It is the default position of countless folks, and certainly of most religious folks. They really do think they deserve to go to heaven. They really think they are pretty decent folks that God is pleased with. As Sinclair Ferguson put it in his 2010 volume, By Grace Alone:

Religious people are always profoundly disturbed when they discover that they are not, and never have been, true Christians. Does all of their religion count for nothing? Those hours in church, hours spent doing good things, hours involved in religious activity—do they not count for something in the presence of God? Do they not enable me to say: “Look at what I have done. Don’t I deserve heaven?” Sadly, thinking that I deserve heaven is a sure sign I have no understanding of the gospel.

Yes quite so – and too many folks have no understanding of what grace means either. At the heart of the biblical teaching on divine grace is the notion of unmerited favour. We get – and need – grace because we are undeserving. We do not merit it. All that sinners deserve is divine punishment.

R. C. Sproul has often discussed such matters as well. In his superb book The Holiness of God (Tyndale, 1985) he has a chapter on “Holy Justice” and discusses this idea of merit and getting what we deserve. He looks at the important distinction between justice and mercy. He writes:

We often blame God for the injustices done to us and harbor in our souls the bitter feeling that God has not been fair toward us. Even if we recognize that He is gracious, we think that He has not been gracious enough. We think we deserve more grace.

Please read that last sentence again: We think we deserve more grace. What is wrong with that sentence? Grammatically it is fine. But there is something seriously wrong with the content, with the meaning of the sentence.

It is impossible for anyone, anywhere, anytime to deserve grace. Grace by definition is undeserved. As soon as we talk about deserving something, we are no longer talking about grace; we are talking about justice. Only justice can be deserved. God is never obligated to be merciful. Mercy and grace must be voluntary or they are no longer mercy and grace. God never “owes” grace. He reminds us more than once: “I will have mercy on whom I will have mercy” (Exod. 33:19). This is the divine prerogative. God reserves for Himself the supreme right of executive clemency.

It does not matter if you are a millionaire and former NYC mayor, or anyone else. We have all gone astray, we all deserve the just wrath of God for our sins, but we can call out to God, asking for his mercy. Cast yourself on his grace and on his mercy. We all need it, and no one deserves it.

Let me conclude by making this plea. I know there are all sorts of folks who will now want to come here and start WWIII. Their theological pet peeves have been all stirred up, and they feel that they must “correct” others who dare to differ with them. Maybe I am getting old, but I do not want that to happen here.

I want people not to derail the main point I am seeking to make here. And that is this: praise God for his glorious grace. We do not deserve it, and we need to thank him now and throughout eternity for his wonderful mercy and matchless grace. Those who prefer to argue are advised to set up their own website and do their thing there!

I will let Martyn Lloyd-Jones have the last word here: “The ultimate test of our spirituality is the measure of our amazement at the grace of God.”

13 Replies to “On Getting What We Deserve”