The experts are now nearly unanimous: lockdowns are counterproductive and must be stopped:

As more and more experts tell us that draconian lockdown measures are causing far more harm than good, we still have various political leaders digging in even further, telling us we must keep these measures in place. In a moment I will speak to three important groups telling us to ditch the lockdowns, but first let me offer a brief update on the latest gabfest from Victorian premier Dan Andrews. 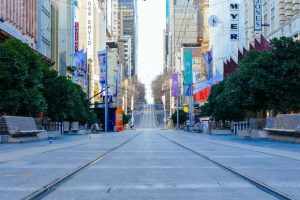 Like perhaps most other Victorians I never watch these interminable events – we just can’t stand the sound of his voice rattling on, defending himself, refusing any accountability, and shoving bucket-loads of baloney down our throats each day.

One would almost rather look forward to a daily trip to the dentist for root canals. But knowing that the champion Peta Credlin would be grilling Andrews again today led me to tune in. She of course did a superlative job last Friday asking Dan the hard questions that needed to be asked, but most pro-Dan journalists were not asking.

So today we had one reporter ask Dan about the latest recommendations by the World Health Organisation that lockdown measures are not actually all that useful in dealing with corona. Sure enough, Andrews went into full-tilt panic mode, telling us we must keep the lockdowns in place, or we will flood our hospitals.

Um, haven’t we heard all that before? And did not all that fear-mongering fail to materialise? We had countless empty hospitals, along with so many people who needed vital hospitalisation refused entry, all because corona never was anywhere near as deadly as the panic merchants predicted. I still recall one Australian academic telling me months ago that it was likely Australia would see one million corona deaths!!

Thus Andrews gave us the same baloney he has been giving us for months. It is all about his insatiable thirst for power and control. And what better way to get and maintain that than by a daily dose of fear and hysteria. All tyrants have known about the value of fear.

Indeed, I recently pulled out an old volume from my library on this very thing. In 1987 a very important book appeared by economic historian Robert Higgs entitled Crisis and Leviathan. Although packed with a wealth of detailed information, the basic thesis of the 350-page book is straightforward enough: governments almost always take advantage of crises in order to grow larger. But once the crisis has passed, they seldom revert to their previous size.

Leviathan remains untamed. And those who are drunk on power like Andrews is are fully using the corona crisis and milking it for all its worth. His ‘two-weeks to flatten the curve’ has now turned into 8 months to flatten Victoria and the rest of the nation.

Anyway, back to the lockdowns. I mentioned WHO, so let me offer what they have recently said about this:

The World Health Organisation has backflipped on its original COVID-19 stance after calling for world leaders to stop locking down their countries and economies. Dr. David Nabarro from the WHO appealed to world leaders yesterday, telling them to stop “using lockdowns as your primary control method” of the coronavirus. He also claimed that the only thing lockdowns achieved was poverty – with no mention of the potential lives saved. “Lockdowns just have one consequence that you must never ever belittle, and that is making poor people an awful lot poorer,” he said. “We in the World Health Organisation do not advocate lockdowns as the primary means of control of this virus.” www.news.com.au/world/coronavirus/global/coronavirus-who-backflips-on-virus-stance-by-condemning-lockdowns/news-story/f2188f2aebff1b7b291b297731c3da74

Hmm, so why does Andrews still insist on keeping damaging lockdowns in place? Yes I know, WHO – as with many others – keep changing their tune here. But if he was willing to follow them when they pushed lockdowns, why is he not following them now? I thought he always said he is just following the best health advice.

And as I have written before, hundreds of Victorian health experts are also telling him the exact same thing. Consider this from today’s press:

A group of concerned doctors is calling for Victoria’s coronavirus lockdown to end immediately. In an open letter to Premier Daniel Andrews, 500 medical experts argue that the state government’s response to COVID-19 is causing severe harm, a spike in mental health issues and a worrying decline in tests for medical conditions like cancer and chest pain. 7news.com.au/sunrise/on-the-show/hundreds-of-melbourne-doctors-call-for-immediate-end-to-harmful-lockdown-c-1379531

And my third group of expert witnesses I discussed just two days ago. In that recent piece I mentioned the Greater Barrington Declaration in which medical authorities called for an end to the lockdowns. In it I said that “20,000 medical health experts have signed it, as have 180,000 members of the general public.” billmuehlenberg.com/2020/10/10/the-great-barrington-declaration/

Well, those numbers have certainly escalated since then. A recent look at the website shows that 26,000 medical experts have now signed it, along with nearly 300,000 others. While numbers alone are not the sole arbiter of healthcare truth, these amazing figures need to be heeded and not discounted.

We now have WHO, over 500 Victorian experts, and over 26,000 medical authorities from around the world all telling us to forget about the lockdowns. Who you gonna call Dan Andrews? Who you gonna listen to? Now that we have hundreds of thousands of livelihoods lost and hundreds, if not thousands, of lives lost because of suicide and so on, it is time to ease up on your ugly ego-trip and power-trip and start really listening to the experts.