It is vital for believers to vote wisely in these four upcoming elections:

I hope that most folks – especially most Christians – are aware that there are four quite important elections coming up real soon. At the very least, Australians, New Zealanders and Americans should be aware of these upcoming elections, and should know how crucial they will be. They are these: 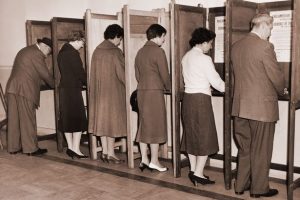 -Saturday October 17 – New Zealand – Will Jacinda Ardern be returned for a second stint as Prime Minister?

-Saturday October 17 – Australian Capital Territory – Will the Legislative Assembly continue to be under Labor control?

-Saturday October 31 – Queensland – Will Premier Annastacia Palaszczuk and Labor get a third go at running the state?

-Tuesday November 3 – USA – Will President Donald Trump be returned for a second term in office?

Each of these elections could be discussed at length and in great detail. Suffice it to say that in my books at least, I am only hoping for one person to continue to remain where he is: Donald Trump. In the other three elections I am hoping for a change of government.

Let me briefly explain why. As to the first election, Bob McCoskrie of Family First NZ offers us a number of important issues that are at stake in the Saturday vote. See some of the core matters here: www.familyfirst.org.nz/?s=election

The ACT election, to be held on the same day, is also quite important on so many levels. As has been the case for some time now, an Australian Christian Values Checklist has been prepared to help voters understand some of the crucial matters, and how some of the main parties stand on them: www.christianvalues.org.au/images/images/acvi_checklist_2020_act.jpg

The Queensland state vote is another key election that will have long-term implications, depending on the result. As we speak, there is another Australian Christian Values Checklist being prepared for this election as well, and will hopefully be out quite soon, so stay tuned.

And the US election may be one of the nation’s most important, with the radical leftist Democrats seeking to undo pretty much all of what Trump and the Republicans have been involved in over the past four years. I will be writing on this in further articles in the near future.

As to Christians and their responsibilities here, it is crucial that they carefully and prayerfully determine how best to vote. In many respects it seems to me that in most of these elections it should be fairly obvious. At the very least, which party or leader the biblical Christian can NOT support should be rather clear.

A key example would be this: Those parties and leaders that have the killing of the unborn as official policy are not the ones Christians should be voting for. This should be a no-brainer. You cannot claim to be a follower of Christ yet at the same time claim that the wholesale slaughter of unborn babies is just fine.

Plenty of other issues of course can be considered. Indeed, the checklists referred to above offer 20 key questions that we ask of the main political parties. We have sought to do our best to get the most accurate party responses, based on what they have said on their websites, their past voting records, their public statements, and so on.

So these checklists offer us a good indication of where the parties stand on some of these key issues. Sure, no one political party will have any sort of perfect Christian position on all things, but some parties will be closer to key Christian concerns than others.

Thus all voters who live in New Zealand, the ACT, Queensland, and the US, need to think long and hard about who the best parties or candidates might be. Again, none will be perfect, and in a fallen world, one may feel that at best we have to choose between a number of less than ideal options.

Perhaps we have only the lesser of various evils to choose from. That may be the case. But since Jesus Christ is not running for office in any of these four elections, we have to choose from who and what is available. But I have spoken to this in much more detail. See here for example: billmuehlenberg.com/2020/09/07/faith-and-politics-again/

And let me speak to the importance of prayer here. For the Christian, prayer is crucial for at least two reasons. One, to help guide the individual believer to know which candidate or which party is the best one to cast their vote for. Two, to help see to it that God’s will is done in terms of the overall bigger outcome.

God does care about politics, and he does care about how Christians approach politics. We need to take our duties seriously as citizens of this world. Voting (especially where it is not mandatory), and voting wisely and with God’s will in mind, are imperatives for all believers.

Elections ARE important. Who we elect can have very positive or very negative ramifications in so many areas. Recall how Germans voted back in 1933 (although that was under very trying times, and the elections were certainly not at all fair or democratic by then).

Obviously on a much different scale, the onerous conditions Victorians are now experiencing (the longest and harshest lockdown conditions of anywhere in the world) can be traced back to two elections in a row in which Labor and Andrews were voted in.

Our votes have consequences. Indeed, just an hour ago Chairman Dan announced that his emergency powers would be extended for yet another month! For some 211 days now, Victorians have basically been prisoners in their own homes, and there seems to be no let-up in sight. Elections matter!

So let me keep reminding you: If you are a person of prayer (and you should be!), then you must keep these elections covered in prayer. All of them require God’s people to seek his face. All Christians need to ask God to grant voters wisdom and clarity as to how best to vote, and that godly outcomes would ensue.

And keep in mind these core biblical principles as found in the book of Proverbs:

Proverbs 11:10 When it goes well with the righteous, the city rejoices,
and when the wicked perish there are shouts of gladness.

Proverbs 14:34 Righteousness exalts a nation,
but sin is a reproach to any people.

Proverbs 28:2 When a country is rebellious, it has many rulers,
but a ruler with discernment and knowledge maintains order.

Proverbs 28:12 When the righteous triumph, there is great elation;
but when the wicked rise to power, people go into hiding.

So please, keep these elections in your prayers. And if you live in any of these four areas, please earnestly seek God as to how you vote. A whole lot depends on the choices we will make in the next few weeks.

Update: As mentioned, here is our checklist for the Queensland state election: www.christianvalues.org.au/images/checklists/acvi_checkList_2020_qld_hr.pdf

4 Replies to “Elections and Christian Responsibility”