Just what is the scandal of the cross, and why is it so offensive?

The cross of Christ is scandalous. The Apostle Paul made that clear in 1 Corinthians 1:22-25 where we read: “For Jews demand signs and Greeks seek wisdom, but we preach Christ crucified, a stumbling block to Jews and folly to Gentiles, but to those who are called, both Jews and Greeks, Christ the power of God and the wisdom of God. For the foolishness of God is wiser than men, and the weakness of God is stronger than men.” 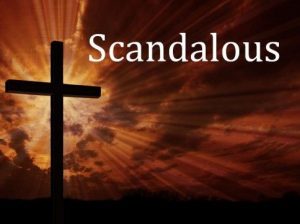 Or as he says in Galatians 5:11: “But if I, brothers, still preach circumcision, why am I still being persecuted? In that case the offense of the cross has been removed.” Paul was not alone in teaching such hard-hitting truths. Jesus had earlier made this teaching clear as well. In John 6:60-66 we find these words:

When many of his disciples heard it, they said, “This is a hard saying; who can listen to it?” But Jesus, knowing in himself that his disciples were grumbling about this, said to them, “Do you take offense at this? Then what if you were to see the Son of Man ascending to where he was before? It is the Spirit who gives life; the flesh is no help at all. The words that I have spoken to you are spirit and life. But there are some of you who do not believe.” (For Jesus knew from the beginning who those were who did not believe, and who it was who would betray him.) And he said, “This is why I told you that no one can come to me unless it is granted him by the Father.” After this many of his disciples turned back and no longer walked with him.

Different forms of the same Greek word from which we get the English words “scandal,” “scandalise,” etc., are used by John and Paul when we read about “offense” and “a stumbling block”. These passages make it clear that the message of the cross causes people to take offense because it is so scandalous.

This is a strong word, in both languages. One online dictionary says this about the English verb scandalise: “shock, outrage, appal, disgust, offend, horrify, affront.” So just what is it about the cross that causes people to get so upset, so scandalised?

Just yesterday I looked at John 6:60-65, and spoke about how it is all due to God’s grace alone that people come to Christ. As Jesus says, ‘the flesh is of no help at all.’ See that piece here: billmuehlenberg.com/2020/10/13/on-getting-what-we-deserve/

But today I include the very next verse: “After this many of his disciples turned back and no longer walked with him.” As I was reflecting on these words last night, I thought of various people I have known who used to be fellow believers, fellow soldiers for Christ, but they are no longer walking with him. For various reasons these people have turned their backs on Christ.

Again, we get back to the scandal of the cross. What keeps people from coming to Christ in the first place, or leads them to walk away later on? One thing that is clear from these passages is that it cuts against all human pride. It cuts against any notions that we have it all together and that we are in control.

Consider the atheist. He claims he does not believe in God, but the opposite is certainly the case. Deep down he knows that God exists, and he thinks about God, talks about God, and rails against God all the time. Why? Because the existence of God is a direct challenge to everything about him.

But plenty of non-atheists think and live in much the same way. Plenty of people who think they are Christians but are not are equally scandalised by God, and by his chosen means of getting right with God. Again, it cuts against human pride.

All other religions in the world have some form of works righteousness at play. They tell folks that if they are good enough, or do enough, or refrain from doing certain things, they can please God, get right with God, and eventually enter into his presence.

Biblical Christianity knows nothing of such thinking. It proclaims utterly forcefully and clearly that sinners are spiritually dead. Dead people cannot do anything, let alone save themselves. That is why the words of Jesus were so shocking, so appalling, and so scandalous.

No wonder the disciples were offended and no wonder so many no longer walked with Jesus. They were as offended back then as countless millions of people are offended today. This is the scandal of the cross. Many commentators could be appealed to here, but let me offer just one. In his two-volume expository commentary on John (P&R, 2014), Richard Phillips has this to say:

Here we confront the Bible’s teaching about the scandal of Jesus Christ. This is what makes Christianity offensive to the human mind and heart. The Ten Commandments might not be appreciated, but they are not hated. The story of Jesus’ birth is not offensive, and most people like the idea of a resurrection. But Christ’s substitutionary atonement? Here is a true offense to the natural man!

There are two reasons for the offense of the cross. The first is that it allows no place for men and women to save themselves. The cross condemns every kind of works-salvation, since it proclaims that man in sin is so lost that only the death of the Son of God in his place can suffice for his deliverance. People are happy to believe in Jesus as a model to follow or as a lofty ethical teacher. But the cross proclaims us all as failures when it comes to following his example or fulfilling his ethics. J. Gresham Machen stated, “He is our Saviour, not because he has inspired us to live the same kind of life that He lived, but because He took upon Himself the dreadful guilt of our sins and bore it instead of us on the cross.” This is a scandalous offence to the natural man, whose pride always wants to do something to commend himself to God….

The second way in which the cross offends is by its demand for an exclusive faith in Jesus Christ alone. This is perhaps the greatest scandal of Christianity in our relativistic age. As long as we say, “Jesus is a way to salvation,” people are not offended. But when Jesus directs that we look to his cross in faith or else perish in our sins, that is a great offense. The same offense was a major issue in the ancient world of the apostles. Machen tells us:

“What struck the early observers of Christianity most forcibly was not merely that salvation was offered by means of the Christian gospel, but that all other means were resolutely rejected. The early Christian missionaries demanded an absolutely exclusive devotion to Christ. . . . Salvation was not merely through Christ, but it was only through Christ. In that little word ‘only’ lay all the offense. Without that word there would have been no persecutions. . . . Without its exclusiveness, the Christian message would have seemed perfectly inoffensive to the men of that day. The offense of the Cross is done away, but so is the glory and the power.”

Yes exactly. The only really important questions that remain are these: Will you too be offended by Christ and the cross? Will you too walk away? Or will you agree with the words of Peter that we find in the very next verses (vv. 67-69)? There we read about this exchange between Jesus and the disciples:

So Jesus said to the twelve, “Do you want to go away as well?” Simon Peter answered him, “Lord, to whom shall we go? You have the words of eternal life, and we have believed, and have come to know, that you are the Holy One of God.”

10 Replies to “The Scandal of the Cross”