The New Testament contains various lists of virtues which the Christian should be modelling:

This article deals with the New Testament and various lists of virtues that we find scattered throughout. I have recently written a piece on the contrasting vice lists, or sin lists, that are also found in the New Testament, and stated that I should cover both sides of the coin – thus this article. The earlier piece can be found here: billmuehlenberg.com/2020/11/24/on-sin-lists/ 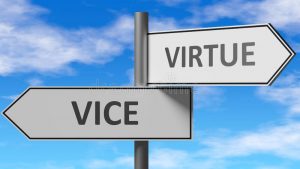 As I mentioned in my previous article, these lists are not meant to be exhaustive, but are simply representative. They are not all-inclusive, but are illustrative. There would be far more sins to avoid and far more virtues to be pursued than any one of these lists offer.

And a few more general things can be said about these lists. One important point is that it is not that if we keep these lists, we can get saved and earn God’s approval. We keep these lists because we are already saved by God’s grace, and living such lives demonstrates our saving faith. As the virtue list in Gal. 5 informs us, these are the fruit of the Spirit.

It is after we have been born again and have Christ by his Spirit living within us that we can begin to fully please God. It is only then that we are able to say no to what is found in the sin lists and are able to live virtuous lives as found in the virtue lists.

Let me then offer some of these virtue lists. They would include:

Let me focus on just two of these passages, which would be representative of the others. The Galatians 5:22-25 list is the most famous perhaps, being the ‘fruit of the Spirit’ list. It can be offered here without any further commentary:

“But the fruit of the Spirit is love, joy, peace, forbearance, kindness, goodness, faithfulness, gentleness and self-control. Against such things there is no law. Those who belong to Christ Jesus have crucified the flesh with its passions and desires. Since we live by the Spirit, let us keep in step with the Spirit.”

But I will bring some commentary to bear on the Colossians 3:12-17 passage which says this:

Put on then, as God’s chosen ones, holy and beloved, compassionate hearts, kindness, humility, meekness, and patience, bearing with one another and, if one has a complaint against another, forgiving each other; as the Lord has forgiven you, so you also must forgive. And above all these put on love, which binds everything together in perfect harmony. And let the peace of Christ rule in your hearts, to which indeed you were called in one body. And be thankful. Let the word of Christ dwell in you richly, teaching and admonishing one another in all wisdom, singing psalms and hymns and spiritual songs, with thankfulness in your hearts to God. And whatever you do, in word or deed, do everything in the name of the Lord Jesus, giving thanks to God the Father through him.

One thing to note here is the idea of putting off and putting on. The verses prior to this speak of putting off the old man, of dying to self, and of renouncing various vices. Now we are told what to put on. So both sides of the coin are needed in order for the Christian to grow and mature.

All of these qualities (and the particular Greek words translated here) are attributed either to God or Christ in the NT, showing further that the good behavior of the Colossians is necessary because it is to mirror the behaviour of God and their Lord Jesus, in whose image they have been created. This notion is implicit from the wider context of Colossians. . . . Christians are to image God’s character. Just as God or Christ is compassionate, kind, humble, gentle, and patient toward believers, so are the believers to be toward one another.

And it needs to be repeated that all this is not about self-effort, of trying really hard to do a lot of good stuff and trying to do a lot less bad stuff. The key here is being in union with Christ. That makes all the difference. Because we are united with him, we can live lives that are pleasing to him.

Sam Storms in his book of devotionals on Colossians says this about Col. 3:12:

Paul’s design in describing the Colossians (and us) with such exalted language isn’t to lull them into spiritual slumber and moral indifference but to shock them, so to speak, with the stunning realization of who they are in Christ. He’s determined to awaken them to the awesome task of living a life that honors the Lord and distinguishes them from the ways of the world. I can almost hear him shouting: “People! Do you have any idea who you are? Elect! Holy! Beloved! And do you know who’s responsible for this? God, not you! Here, then, is how you are to live: be compassionate, kind, humble, meek, patient, bearing with one another, forgiving one another, etc.”

So important is this idea of the believer’s union with Christ that I will here veer away from the commentaries and turn to one book (of many) that speaks directly to this theme. I will utilise the important volume by Constantine Campbell, Paul and Union with Christ: An Exegetical and Theological Study (Zondervan, 2012). At the end of his study he says this:

The theme of union with Christ is directly addressed in approximately thirty-two instances in Paul’s letters. The prominence of the theme, therefore, both in frequency of reference and theological significance, is substantial. However, there are many more instances—by far the majority—in which union with Christ is referenced in passing and in connection to other themes. Indeed, virtually every topic that Paul addresses is in some measure connected to union with Christ….

[Union with Christ] is the essential ingredient that binds all other elements together; it is the webbing that connects the ideas of Paul’s web-shaped theological framework. It is for this reason that we can say that every blessing we receive from God is through our union with Christ. It is by being united to him in faith by the Spirit, dying, suffering, rising, and glorying with him, having been predestined and redeemed in him, being identified with his realm, and being incorporated into his people that believers enjoy the manifold grace of God.