The Bible gives us many lists of things to avoid like the plague:

Yes you read that right. No, I do not mean “shopping lists” or “to-do lists” or something like that. I will explain in a moment what exactly I mean, but let me preface this article by making the following observations. There are too many folks who claim to be Christians who will insist that we need not worry about rules and regulations. 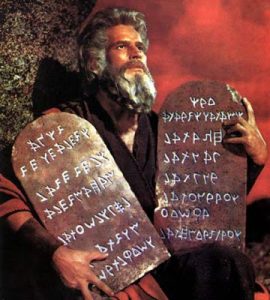 They will tell us that the only thing that matters is ‘love’. We should not worry about various behaviours, they say, and we should not concentrate on what we should or should not do (irony intended!). ‘Just love everybody’ is their creed. Of course such an amorphous and undefined love helps no one, and can indeed cover a multitude of sins.

And that is just what these folks end up doing: they are effectively trying to make excuses for sin, They are trying to tell us that we are getting hung up on right and wrong and that we need to just go with the flow – the flow of love. These folks are into what is called “Progressive Christianity.” It might better be called “Fake Christianity.” See more on this here: billmuehlenberg.com/2011/01/23/progressive-christianity/

The so-called emerging church movement has been a very big part of this. You can find another 40 articles on this worrying trend here: billmuehlenberg.com/category/the-church/the-emergent-church/

A nebulous Christianity without rules, but just a lotta emotive “love,” is completely foreign to Scripture. Biblical love is always a well-defined love, and a bounded love. It is bounded by right and wrong, truth and error. And part of all this includes what are known as “sin lists”. There are actually plenty of them to be found in the New Testament.

They make it perfectly clear that biblical love always involves doing what is right and eschewing what is evil. Real Christian love is as much about actions as attitudes. If you truly love God and others you will not sin against them by doing evil and withholding good.

So just what are all these sin lists, or vice lists? While not really found in the Old Testament, they were quite common in Greek and Roman literature. They were primary illustrative and not exhaustive lists. They are regularly found in the New Testament. Here are 18 of the main sin lists (and there would likely be some other shorter lists that could be included here):

Let me run with just a few of the more obvious ones. A major list – perhaps the most pointed and powerful – is the one found in Romans 1:

Therefore God gave them up in the lusts of their hearts to impurity, to the dishonoring of their bodies among themselves, because they exchanged the truth about God for a lie and worshiped and served the creature rather than the Creator, who is blessed forever! Amen. For this reason God gave them up to dishonorable passions. For their women exchanged natural relations for those that are contrary to nature; and the men likewise gave up natural relations with women and were consumed with passion for one another, men committing shameless acts with men and receiving in themselves the due penalty for their error. And since they did not see fit to acknowledge God, God gave them up to a debased mind to do what ought not to be done. They were filled with all manner of unrighteousness, evil, covetousness, malice. They are full of envy, murder, strife, deceit, maliciousness. They are gossips, slanderers, haters of God, insolent, haughty, boastful, inventors of evil, disobedient to parents, foolish, faithless, heartless, ruthless. Though they know God’s righteous decree that those who practice such things deserve to die, they not only do them but give approval to those who practice them.

The 2 Timothy list seems to describe us to a T:

But understand this, that in the last days there will come times of difficulty. For people will be lovers of self, lovers of money, proud, arrogant, abusive, disobedient to their parents, ungrateful, unholy, heartless, unappeasable, slanderous, without self-control, brutal, not loving good, treacherous, reckless, swollen with conceit, lovers of pleasure rather than lovers of God, having the appearance of godliness, but denying its power. Avoid such people.

But as for the cowardly, the faithless, the detestable, as for murderers, the sexually immoral, sorcerers, idolaters, and all liars, their portion will be in the lake that burns with fire and sulfur, which is the second death.

Obviously, these lists fully demonstrate that those trying to run with the line that we should not worry about dos and don’ts are rejecting the clear teachings of Scripture. If the biblical writers – including Jesus himself – felt that rules of right and wrong did not matter, then they were lying to us when they gave us all these lists of right and wrong!

Yes, there are also lists of virtues to be found in the New Testament. I may need to pen an article on those as well. But to speak about the importance of right and wrong actions is NOT to overlook the importance of attitudes and motives and the heart. One can of course do the right thing for the wrong reasons.

Biblical Christianity focuses on both. Our inner heart motivations and our outer external actions are both crucial. But the progressives, and those in the emerging church movement, seek to give us a decimated Christianity, where only some of its emphases are offered.

Yes, love matters, and yes our heart attitude is important. But so too are our actions, our deeds, our behaviours. Both aspects must be included. Otherwise we are insisting on flying a plane with only one wing. Otherwise we are giving a highly distorted and truncated view of biblical truth.

As D. A. Carson strongly said about this in his 2005 book, Becoming Conversant with the Emerging Church:

So which shall we choose? Experience or truth? The left wing of an airplane, or the right? Love or integrity? Study or service? Evangelism or discipleship? The front wheels of a car, or the rear? Subjective knowledge or objective knowledge? Faith or obedience? Damn all false antitheses to hell, for they generate false gods, they perpetuate idols, they twist and distort our souls, they launch the church into violent pendulum swings whose oscillations succeed only in dividing brothers and sisters in Christ.

Let us reject such false antitheses and run with the fulness of Scripture. And that will mean – among other things – that while we readily run with a virtue list such as found in Galatians 5:22-23 (the fruit of the Spirit), we also run with the sin list found immediately before it (vv. 19-21).

5 Replies to “On Sin Lists”