This should be of help as you read through the Song of Songs:

These are several poetic books, or wisdom literature books, in the Old Testament. Two of these brief books – Ecclesiastes and Song of Songs – may be among the least read and the least understood OT books by Christians today. Both have their fair share of challenges, and both have all sorts of hermeneutical questions that arise. But both are part of inspired Scripture, and both deserve careful reading and study. 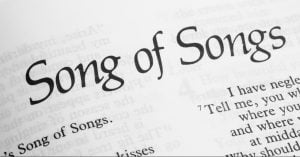 By all accounts this book – also called the Song of Solomon – is a love story. But questions concerning it are many: Did Solomon write it? Is he the main character? Is this just about physical love? Is it merely allegorical? Should we spiritualise all this? How exactly are we to interpret this book?

I cannot look at all of these questions in detail, but I can speak to them at least briefly. As to authorship, Solomon has traditionally been regarded as the author of the book, and one of the subjects of the book. Some scholars differ on both points. Most of the good critical commentaries will devote a fair amount of time discussing such matters, so I refer the reader to those volumes for more on this.

Regarding interpretation, G. Lloyd Carr puts it this way: “The major problem a commentator must face with this book is deciding what sort of literature this is and what basic approach to take in interpreting it.” He notes the four main ways of dealing with the question over the centuries: allegory; typology; drama; and the natural, or literal.

He opts for the last one and says, “The Song is a celebration of the nature of humanity—male and female created in God’s image for mutual support and enjoyment.” In his REC commentary Iain Duguid says this:

I believe that it is possible to steer a middle ground between the allegorical and literal extremes: to recognize the Song of Songs as wisdom literature that celebrates a great mystery in life, the mutual love of a man and a woman (Prov. 30:19), yet that in this celebration will not only shape our thinking about human relationships but also show us profound insights into the love that Christ has for his bride, the church.

Dennis Kinlaw reminds us of the bigger picture here:

The use of the marriage metaphor to describe the relationship of God to his people is almost universal in Scripture. From the time that God chose Israel to be his own in the Sinai Desert, the covenant was pictured in terms of a marriage. Idolatry was equated with adultery (Exod. 34:10-17). Yahweh is a jealous God. Monogamous marriage is the norm for depicting the covenant relationship throughout Scripture, climaxing with the Marriage Supper of the Lamb. God has chosen a bride. . . . If divine love is the pattern for marriage, then there must be something pedagogical and eschatological about marriage. It is an earthly institution that in itself images something greater than itself.

Iain Provan offers a helpful overview of how we should think about human, physical love:

The Bible teaches us of a creation that is good and of a sexuality that is a hallowed aspect of what is good (Gen. 1). It knows that sexuality is touched by sin and damaged, as are all aspects of creation; but redemption, biblically, is not about escape from createdness. It is about the restoration of the image of God in human beings (as well as the renewal of all creation); such restoration involves, at least on this side of eternity, the restoration of sexuality and sexual expression as it should be under God.…

There is no justification, then, for thinking that Christian living must necessarily be ascetic living or that ascetic living is somehow more spiritual than living that is not ascetic. God made everything good—and it remains good, even though marred by sin. Sexual expression remains good in itself, even though touched by sin (whether committed by us or upon us).

Or as Richard Hess says,

The Song fills a necessary vacuum in the Scriptures because it endorses sex and celebrates it beyond all expectation. Although abuse is possible and to be avoided, sex is not inherently evil, nor is it limited to a procreative function. Instead, sex enables an experience of love whose intensity has no parallel in this cosmos and serves as a signpost to point to the greater love that lies beyond it.

And a summary statement from Duane Garrett: “In contrast to the tendency to treat sexuality as intrinsically vile and the antithesis to holiness, the Song of Songs presents sexual love as a thing of great beauty and an activity that enriches human life. The Song teaches that love and sex are good.”

Two final comments, looking at the even greater love that God offers fallen mankind, Duguid is again worth quoting from:

Our desire to love and be loved by a human being is at its core simply a reflection of our desperate need to love and be loved by the God who made us for himself. As Augustine famously put it: “You have made our hearts for yourself, O Lord, and our hearts are restless until they find repose in you.” The Song addresses us as broken people who have disordered desires and shows us a glimpse of what ordered desire look like while at the same time reminding us just how hard it is to find love like that in this world. In so doing, the Song of Songs calls us to a relationship with the One who entered the world of disordered desires and loved perfectly in our place. . . . The intensity of our earthly desire for love thus mirrors that greater and deeper hunger for God’s love.

And looking at the final verses of this book, Douglas Sean O’Donnell says this:

It is my contention and others’ that this ending leaves us longing for more. In other words, the Song intentionally ends abruptly and inconclusively because the Song is not done. Love is not done. The Song of Songs ends with this eschatological angst. What’s going to happen next? . . . In Revelation 22:20, this is how the book ends, how the Bible ends: in the last chapter and verse of our Bibles, our Lord Jesus/the Bridegroom says, “Surely I am coming soon,” and the Church/the bride says, “Come” (v. 17). “Amen. Come Lord Jesus!” (22.20). Make haste! That’s how the Bible ends. That’s how the Song ends.

Given the dark days that we now live in, in which everything good is perverted, and theological revisionism is rife, some further words from Garrett are needed here. He goes on to say:

Song of Songs does not prescribe rules for human sexual life or even explicitly speak of them (with one significant exception), but this does not mean that there is no moral outlook pervading the text. The sexuality of the Song is monogamous and heterosexual. This is not imposing a bourgeois Protestant morality on the Song. In reality, heterosexual monogamy is the foundation for all of the Song’s celebration.

The sexuality of the Song is heterosexual; a “gay reading” of the Song is the most violent kind of an imposition of extrinsic values on the Song. Not only are the central lovers in the Song male and female, but it is understood that this is the outlook of the community at large. At the beginning of the Song, when the splendors of the man’s love are being praised, the woman responds that the girls “rightly” love the man (Song 1:3–4).

This love is monogamous in nature. The woman is to the man “my sister, my companion, my bride” (e.g., Song 5:1). She is the lotus blossom; all other women are thorns (Song 2:2).

Devotional books and expository commentaries include: