Ecclesiastes can be a difficult book to comprehend. This might be of help:

This is one of those Old Testament books that many Christians struggle with, find too troubling, or ignore altogether. The gloomy, pessimistic message seems to run counter to the hopeful and positive gospel message as found in the New Testament. But it is part of God’s revealed word. 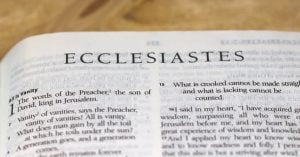 We are all familiar with the phrase, “Vanity, vanity, all is vanity”. It comes from Ecclesiastes, and the word “vanity” is found over 30 times in this book. The Hebrew term literally means “vapour,” and can also be translated meaninglessness, futility, or emptiness. Depending on the context, it can refer to that which is fleeting, ephemeral, elusive or inscrutable.

The question immediately arises: how does such a seemingly bleak and dark view fit in with the totality of biblical revelation? Indeed, plenty of questions arise here. As David Hubbard notes, “Few Old Testament writings have produced such a flurry of opinions as to how they should be read and what they mean.”

Even the identity of the speaker, Qohelet (the Hebrew term, sometimes translated preacher or teacher), is still a matter of discussion. Some OT scholars like Walter Kaiser equate him with Solomon, while others, such as Tremper Longman, don’t think so.

And then there are questions of authorship, dating, and the like. Traditional views have held Solomon to be the author, but not all agree with that. One can see the extensive discussions and debates on this in the various critical commentaries listed below.

Moreover, various schemes for trying to interpret the book have been proposed over the centuries. The pros and cons of those issues and related matters are also found in the commentaries. But still there are questions about such a seemingly negative and dreary worldview, and how it fits in with the rest of Scripture. And we seem to get mixed messages in the book, as if more than one voice were speaking. As Michael Eaton puts it,

The major interpretive problem of Ecclesiastes is to understand its apparent internal contradictions and vicissitudes of thought. At times the Preacher seems to be gloomy, pessimistic, a skeleton at the feast; everything comes under his lashing scorn: laughter, drink, possessions, sex, work, wisdom, riches, humour, children, even righteousness. Yet, at other points he urges that we should enjoy life, that there is nothing better than to eat well, enjoy our labour, receive with gladness the riches God gives us but be content if he gives none. A man, he says, should seek wisdom and knowledge, drink his wine with a merry heart, and live joyfully with the wife he loves. The Preacher’s argument and his relationship to Israelite orthodoxy seems ambiguous. At times he appears to overthrow everything Israel stood for; at other points we see the traditional view of God as sustainer and judge of all things, who gives life to men and who may be worshipped at Israel’s focal point, the temple.

In his quite recent commentary on the book, Knut Martin Heim says this as part of his introduction:

Opinions on the theology of the book of Ecclesiastes differ wildly. On the one hand a significant minority opinion maintains that the book’s protagonist is an orthodox teacher with a positive view of life. On the other hand, a strong majority position advocates that Qoheleth is a disillusioned sceptic who challenges orthodox beliefs. ‘Commentators remain polarized as to whether Ecclesiastes is fundamentally positive, affirming joy, or basically pessimistic’. The interpretation of Ecclesiastes as resistance literature in the form of political satire resolves this scholarly impasse.

Either way, the issue of futility and vanity seems to be our lot in life, but there can be a purpose for it. As Daniel and Jonathan Akin explain:

When humanity departed from God’s design, God imposed a curse on the world (Gen 3; Rom 8). Therefore, everything is broken in our world and in our lives. We try to find ways out of the brokenness but only end up more broken and frustrated. We turn to possessions and pleasurable experiences and status and relationships and even to religion trying to fix what is broken, but it is futile. No amount of pleasurable experiences, job success, or religious ritual can fix what is broken. As we will see, this reality is part of God’s goodness in our lives. He imposed the futility in hope that we would long for and hope in Him!

That is a helpful perspective to keep in mind. Philip Graham Ryken informs us about the value of the book. He is worth quoting at length:

We should study Ecclesiastes because it is honest about the troubles of life—so honest that the great American novelist Herman Melville once called it “the truest of all books.” More than anything else in the Bible, Ecclesiastes captures the futility and frustration of a fallen world. It is honest about the drudgery of work, the injustice of government, the dissatisfaction of foolish pleasure, and the mind-numbing tedium of everyday life—”the treadmill of our existence.” Think of Ecclesiastes as the only book of the Bible written on a Monday morning. Reading it helps us to be honest with God about the problems of life—even those of us who trust in the goodness of God. In fact, one scholar describes Ecclesiastes as “a kind of back door” that allows believers to have the sad and skeptical thoughts that we usually do not allow to enter the front door of our faith.

We should also study Ecclesiastes to learn what will happen to us if we choose what the world tries to offer instead of what God has to give. The writer of this book had more money, enjoyed more pleasure, and possessed more human wisdom than anyone else in the world, yet everything still ended in frustration. The same will happen to us if we live for ourselves rather than for God. “Why make your own mistakes,” the writer is saying to us, “when you can learn from an expert like me instead?”

Then too we should study Ecclesiastes because it asks the biggest and hardest questions that people still have today. As we shall see, there is some debate as to when this book was actually written. But whether it was written during the glory days of Solomon’s golden empire or later, when Israel was in exile, it addresses the questions that people always have: What is the meaning of life? Why am I so unhappy? Does God really care? Why is there so much suffering and injustice in the world? Is life really worth living? These are the kinds of intellectual and practical questions that the writer wants to ask. “Wisdom is his base camp,” writes Derek Kidner, “but he is an explorer. His concern is with the boundaries of life, and especially with the questions that most of us would hesitate to push too far.” Nor is he satisfied with the kind of easy answers that children sometimes get in Sunday school. In fact, part of his spiritual struggle is with the very answers that he has always been given. He was like the student who always says, “Yes, but …”

Here is another reason to study Ecclesiastes: it will help us worship the one true God. For all of its sad disappointments and skeptical doubts, this book teaches many great truths about God. It presents him as the Mighty Creator and Sovereign Lord, the transcendent and all-powerful ruler of the universe. Reading Ecclesiastes, therefore, will help us grow in the knowledge of God.

At the same time, this book teaches us how to live for God and not just for ourselves. It gives us some of the basic principles we need to build a God-centered worldview, like the goodness of creation and our own absolute dependence on the Creator. Then, on the basis of these principles, Ecclesiastes gives many specific instructions about everyday issues like money, sex, and power. It also has many things to say about death, which may be the most practical issue of all.

And what we do know about the book is that it seems to finish on a high note, that is, a very biblical note. As we read in 12:13-14: “The end of the matter; all has been heard. Fear God and keep his commandments, for this is the whole duty of man. For God will bring every deed into judgment, with every secret thing, whether good or evil.”

As Douglas Sean O’Donnell puts it at the end of his commentary:

This book is God’s reminder that if you are attempting to live the “meaningful” secular life—“a life without absolutes, a life lived out of values without reference to God, a life that expects lasting satisfaction from earthbound things” – you are attempting to grasp the unattainable. You are like a foolish child trying to catch the winds of a hurricane within the strands of a butterfly net.

The best remedy for the depression caused by this realistic observation and experience of the world is not to pop the pill but rather to digest once and for all the goodness of God. The ultimate remedy to meaninglessness and the depression caused by a godless life is God. The Lord alone can fill the void in human hearts. This end, or goal, is precisely what we find at the end of Ecclesiastes (12:13-14).

So whether the bulk of the book presents a perspective of the man apart from God (“under the sun” – 1:3), or a backslidden believer, or just life in a fallen world, etc, it lets us know what the final resolution is to be.

A simple, brief outline of Ecclesiastes is this: