A lot was happening in the world exactly 400 years ago. Having just recently again celebrated Thanksgiving in America, it is worth looking at this history once more – especially because of the historical revisionists who dislike our past and are trying to rewrite it. 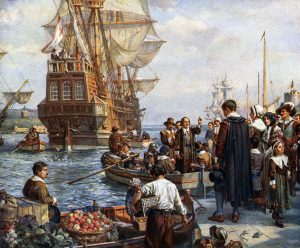 Let me look at a few decades before the Mayflower sailed to give some background. A brief timeline of some hugely significant events would include the following:

-1604 King James I rejects most of the Puritan requests for reform.
-1606 Reform-minded Puritans in Nottinghamshire set up their own separate church.
-1608 Persecution follows, and a number of English dissenters flee to Holland.
-1620 The group secures financial backing from some London merchants to establish a colony in America.
-September 16, 1620 The Mayflower departs from Southampton, England with 102 passengers on board.
-November 11, 1620 The Mayflower anchors at what is now Provincetown Harbor, Cape Cod.
-December 18, 1620 The Mayflower lands at Plymouth Harbor in modern-day Plymouth, Massachusetts.

I have written before about all this. In one article I look at the Christian background of this journey (the search for religious liberty, and so on): billmuehlenberg.com/2010/11/26/happy-thanksgiving-restoring-the-christian-connection/

In another I discuss the short-lived and failed experiment in socialism in the New World: billmuehlenberg.com/2019/11/28/god-socialism-and-thanksgiving/

But the story is being challenged by secular leftists as a part of their attempt to rewrite history, and depict all whites as evil oppressors and racists. One major part of this deconstruction job is the 1619 Project. As you might guess by the title, this is the attempt to cast the Pilgrims in a negative light.

It has been developed by The New York Times. It says this about its aims: “The 1619 Project is an ongoing initiative from The New York Times Magazine that began in August 2019, the 400th anniversary of the beginning of American slavery. It aims to reframe the country’s history by placing the consequences of slavery and the contributions of black Americans at the very center of our national narrative.” www.nytimes.com/interactive/2019/12/20/magazine/1619-intro.html

Needless to say, there have been many critiques of this initiative. Let me cite just a few. One piece began with these words:

‘‘So wrong in so many ways” is how Gordon Wood, the Pulitzer Prize-winning historian of the American Revolution, characterized the New York Times’s “1619 Project.” James McPherson, dean of Civil War historians and another Pulitzer winner, said the Times presented an “unbalanced, one-sided account” that “left most of the history out.” Even more surprising than the criticism from these generally liberal historians was where the interviews appeared: on the World Socialist Web Site, run by the Trotskyist Socialist Equality Party. www.wsj.com/articles/the-1619-project-gets-schooled-11576540494

Another piece began this way:

The reviews of the 1619 Project are in. It is “a very unbalanced, one-sided account.” It is “wrong in so many ways.” It is “not only ahistorical,” but “actually anti-historical.” It is “a tendentious and partial reading of American history.”

This is what top historians have said of the splashy New York Times feature on slavery in the U.S. that aspires to fundamentally reorient our understanding of American history and change what students are taught in the schools.

Given that the Times can’t necessarily be trusted to give a straight account in its news pages of Mitch McConnell’s latest tactical maneuver, it wouldn’t seem a natural source for objective truth on sensitive historical matters, and sure enough, the 1619 Project is shot through with an ideological radicalism that leads to rank distortions and laughable overreach.

The project has been controversial since it was first published in The New York Times Magazine last year, but its architects sneered at the critics as troglodyte conservatives (or “white historians”) unwilling to grapple with the country’s racial sins. Then the World Socialist Web Site — of all things — begin publishing interviews with eminent historians slamming the project.

All of the above quotations come from the website’s interviews with highly accomplished and respected historians — the Princeton professor James McPherson, author of the magisterial history of the Civil War, Battle Cry of Freedom; the formidable historian of the Revolutionary War period, Gordon Wood; the CUNY professor James Oakes, who specializes in the Civil War period; and the Lincoln scholar Richard Carwardine of Oxford University. www.nationalreview.com/2020/01/1619-project-top-historians-criticize-new-york-times-slavery-feature/

And Wilfred Reilly looks at the three central claims of the Project:

Here is what he says about the second claim:

Slavery made some Americans rich—true enough. Eli Yale, for example, made a fortune in the slave trade. He donated money and land for the university that is named after him. But the institution of slavery didn’t make America rich. In fact, the slave system badly slowed the economic development of half the country.

As economist Thomas Sowell points out, in 1860, just one year before the Civil War began, the South had only one-sixth as many factories as the North. Almost 90% of the country’s skilled, well-paid laborers and professionals were based in the North. Banking, railroads, manufacturing—all were concentrated in the North. The South was an economic backwater. And the cost of abolishing slavery was enormous—not merely in terms of dollars (Lincoln borrowed billions to pay for it), but also in terms of human life: 360,000 Union soldiers died in order to free 4 million slaves. That works out to about one soldier in blue for every ten slaves freed. It’s hard to look at that butcher’s bill and conclude that the nation turned a profit from slavery.

And many things have happened since 1865. In the almost 200 years since the Civil War, the population of the country has grown almost 900% and our national GDP has increased 12,000%. Slavery did not make America rich. assets.ctfassets.net/qnesrjodfi80/6pHowieMH6mlh35Bs5SqVX/f65d59b627651783162f5edcfe42ce0b/Reilly-Whats_Wrong_With_the_1619_Project-Transcript.pdf

Finally, one critic of the 1619 Project, Phil Magness, was interviewed last year on this. Here is just one small part of that interview:

Nick: To move out to the broad picture, it seems like the crux of the issue is the role of slavery in the economic development in the US. How, very generally, do you think we should think about this?

Phil: I see slavery as, certainly, a major sector of economic production. It’s certainly a component of how the U.S. evolves across the early and middle 19th century. It’s a horrific institution and needs to be documented as such. But, the economic portrayal of it being the crux of capitalism or the mechanism that allowed for industrialization to occur is almost completely false. It’s actually a relatively small sector among many that are components of the U.S. economy in the antebellum period. And, none of those sectors, when taken alone, could be used as a single-issue explanation of why industrialization happened. brownpoliticalreview.org/2019/10/bpr-interviews-phil-magness-on-the-1619-project/

I mention him in particular since he now has a whole book out on this. It is called The 1619 Project: A Critique (American Institute for Economic Research, 2020). Another new book that also assesses this is Peter Wood’s 1620: A Critical Response (Encounter Books, 2020).

Unfortunately, the copy of this that I ordered has not yet arrived, so I cannot give the book proper justice here. Perhaps when it does arrive I will do a full review of it. In the meantime, Stanley Kurtz says this about it: “Peter Wood’s pushback against the 1619 Project is at once sharp, illuminating, entertaining, and profound. More than a powerful exposé of the 1619 Project’s mendacity, Wood’s 1620 explains why so many Americans have succumbed to this exercise in manipulation–and shows the way to fight back.”

And speaking of books, let me mention one more. Moving away from the particular aspects of slavery, and returning to the broader story of the Mayflower and the Pilgrim Fathers, there are some good books available which give us the story without all the leftist and secularist spin.

One volume well worth being aware of is from the American historian and Christian, Robert Tracy McKenzie. It is titled, The First Thanksgiving (IVP, 2013). Those wanting a more detailed story on those events of 400 years ago are encouraged to get a copy.

In sum, what happened four centuries ago is not a matter of shame and angst, but is something to rightly commemorate each year. And remember, it was the state, not the church, that actually instituted Thanksgiving as a public holiday. It certainly is a day well worth commemorating and celebrating.

2 Replies to “The Mayflower, America, and the Rewriting of History”