There was a real Saint Nicholas and he seemed to be a pretty neat guy:

Yes, Virginia, there is a Saint Nicholas. There was a real historical figure – although now surrounded by much legend – that existed in the third and fourth centuries. His life and activities became the basis for who we now run with at Christmas: Santa Claus. 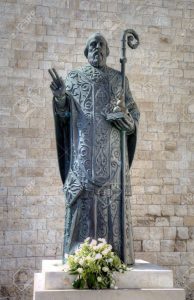 I write about him here for three reasons. One, it is nearly Christmas. Two, I am sometimes asked how Christians should think about Santa. And three, every year at this time some Grinches will come out of the woodwork and harshly judge and condemn any Christian who dares to celebrate Christmas.

These folks claim it is a pagan event and believers should have nothing to do with it. I have been on the receiving end of too many of these judgmental and ungracious folks. They are keen to treat you as an arch-heretic if you so much as wish them a Merry Christmas. But I explain why they are historically and theologically mistaken in this piece: billmuehlenberg.com/2013/11/12/christmas-of-pagan-origins/

So let me discuss the real Saint Nicholas. As mentioned, there is plenty of myth and legend that has developed around him, so historians say that we do not always know exactly what is true of this figure and what is not. But the following seems to be a more or less accurate depiction of the man and his mission.

He is said to have been born in the year 270 in Patara in Asia Minor – now on the southern coast of Turkey. He was a bishop in the port city of Myra. One article says this about his life:

His wealthy parents, who raised him to be a devout Christian, died in an epidemic while Nicholas was still young. Obeying Jesus’ words to “sell what you own and give the money to the poor,” Nicholas used his whole inheritance to assist the needy, the sick, and the suffering. He dedicated his life to serving God and was made Bishop of Myra while still a young man. Bishop Nicholas became known throughout the land for his generosity to those in need, his love for children, and his concern for sailors and ships. Under the Roman Emperor Diocletian, who ruthlessly persecuted Christians, Bishop Nicholas suffered for his faith, was exiled and imprisoned. www.stnicholascenter.org/who-is-st-nicholas

But when Constantine became emperor, Nicholas was freed, and he returned to his preaching. He is known as being generous in giving gifts to others, especially children. As one write-up about his life puts it: “St. Nicholas was beloved because he spent his life helping the poor and underprivileged. He was the first to initiate programs for mentally challenged children. His love for children led him to visit their homes at night disguised in a red-and-white hooded robe to leave gifts of money, clothing, and food in their windows or around their fireplaces.” www.christianpost.com/voices/what-does-the-bible-say-about-santa-claus.html

He seems to have died on December 6, 342 in Myra. The anniversary of his death became known as St. Nicholas Day. The article just quoted goes on to say this about him:

After his death, he was made the patron saint of sailors since his church was located in a port city and had an extensive ministry to those who traveled the sea. He was later named the patron saint of Russia. Nicholas was one of history’s most venerated saints, with more than five hundred songs and hymns written in his honor. Christopher Columbus arrived in Haiti in 1492 and named the port after him. By the year 1500, more than seven hundred churches in Britain were dedicated to him.

Now before some Christians get too huffy here, yes Protestants have a different view on the matter of saints than do the Catholics and the Orthodox. While they uphold certain noted individuals and elevate them as saints (whether venerated, worshipped or just admired), Protestants believe that all Christians are saints. That is, we are all set apart and sanctified because of the saving work of Christ on our behalf.

Thus Paul can speak to other believers as “the saints who are in Ephesus” (Ephesians 1:1) or “all those in Rome who are loved by God and called to be saints” (Romans 1:7), etc. But there is no need to jettison important historical figures like Nicholas because of certain labels or titles attached to them.

One famous episode which I like – and other theological types might like as well – has to do with his supposed involvement at the 325AD Council of Nicea where the faulty Christology of the Arians was being dealt with. It seems that this heretical figure got under Nicholas’s skin, and so he smacked him in the chops! Hey, my kinda guy: literally fighting for the faith! Just kiddin’. One piece discusses the incident this way:

Arius, from Egypt, was teaching that Jesus the Son was not equal to God the Father. Arius forcefully argued his position at length. The bishops listened respectfully. As Arius vigorously continued, Nicholas became more and more agitated. Finally, he could no longer bear what he believed was essential being attacked. The outraged Nicholas got up, crossed the room, and slapped Arius across the face! The bishops were shocked. It was unbelievable that a bishop would lose control and be so hotheaded in such a solemn assembly. They brought Nicholas to Constantine. Constantine said even though it was illegal for anyone to strike another in his presence, in this case, the bishops themselves must determine the punishment. www.stnicholascenter.org/who-is-st-nicholas/stories-legends/traditional-stories/life-of-nicholas/bishop-nicholas-loses-his-cool

This story may be more fiction than fact. But let me explain how we in Australia and America, etc, got to the place of having Santa around each December. It goes back to Europe, where various countries continue to celebrate his life and death. As a site I already referred to states:

Widely celebrated in Europe, St. Nicholas’ feast day, December 6th, kept alive the stories of his goodness and generosity. In Germany and Poland, boys dressed as bishops begged alms for the poor—and sometimes for themselves! In the Netherlands and Belgium, St. Nicholas arrived on a steamship from Spain to ride a white horse on his gift-giving rounds. December 6th is still the main day for gift giving and merrymaking in much of Europe. For example, in the Netherlands St. Nicholas is celebrated on the 5th, the eve of the day, by sharing candies (thrown in the door), chocolate initial letters, small gifts, and riddles. Dutch children leave carrots and hay in their shoes for the saint’s horse, hoping St. Nicholas will exchange them for small gifts. Simple gift-giving in early Advent helps preserve a Christmas Day focus on the Christ Child. www.stnicholascenter.org/who-is-st-nicholas

His story is especially well promoted in Holland where I used to live. One article says this about the situation there:

Legends about Nicholas gradually became entrenched in the unique cultural traditions of different countries. In the Netherlands, he took the form of Sinterklaas, a mythical figure said to have sailed from Spain with a Moorish helper named Black Peter (“Zwarte Piet”). Sinterklaas supposedly filled Dutch children’s shoes with treats and knew whether their behaviour was good or bad.

In North America, the idea of Sinterklaas arrived with Dutch immigrants, and his name became anglicized as Santa Claus. The publication in 1823 of Clement Clarke Moore’s poem A Visit from St. Nicholas, commonly known as The Night Before Christmas, helped establish the modern image of Santa Claus, which was further popularized in the 1930s through advertisements for Coca-Cola. www.anglicanjournal.com/st-nicholas-a-legendary-figure-with-contemporary-relevance/

Yes there was a Saint Nicholas, who more or less morphed into our modern Santa. For a Christian to run with Santa a little bit, and to bring some smiles to some small children once a year is not in my view taking on the Mark of the Beast! And no, we are not bowing down to worship Santa, or a Christmas tree, or anything else this time of year.

Yes, Christmas has become really commercialised and the real message is often lost, but there is no need to condemn everyone for giving gifts at this time of year, or for even putting on a red suit to do so while we keep explaining what the first Christmas actually involved.

How you, your family, and your church do Christmas, and what you do with Santa, is really up to you. For example, if a church is having an outreach in a local park, with Christmas carols, speakers, and a guy dressed as Santa to give gifts to the children there, and if the message of Christ is proclaimed from the stage, I have no real problems with that.

If that is not to your liking, fine, do not feature him there – or elsewhere. And if you think I should be burned at the stake for daring to suggest such things, well, all I can say is, “Merry Christmas and God bless you!” Let me close in the same way that I did in my earlier piece, linked to above, with some words from a Reformed pastor:

So folks, lighten up, rejoice in your liberty of conscience in Christ. If you choose not to celebrate Christmas, then the Lord bless you – take advantage of having the day off and read a good book or something. But grant your brother the same liberty of conscience – and literally, for God’s sake, do not create a law where He Himself has not done so. But as for me and my house, we intend to feast and celebrate and rejoice that the Lord has come into the world with a cheerful heart and a good conscience. atthefeetof-jesus.blogspot.com/2012/08/by-rev-brian-abshire-on-may-4th-2008.html

13 Replies to “On Saint Nicholas”