These helps to the study of Colossians should be of use:

This is another book commonly attributed to the Apostle Paul that in more recent times has been challenged as to its authorship. Those discussions are found in the critical commentaries listed below, so the reader is advised to go there for the detailed pros and cons. But I will accept Pauline authorship here. 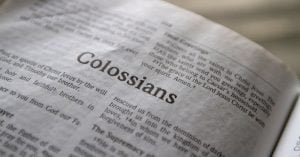 This is another brief letter (of only four chapters) but it is filled with important truths. A major theme of this book is the Lordship of Christ over all things. He is Lord over all of creation, including all that is not seen. In the introduction to his commentary on Colossians, David Pao states:

The significance of this letter to the Colossians lies in its subject matter, to which Calvin rightly points: “this Epistle  … to express it in one word, distinguishes the true Christ from a fictitious one.” In various ways, Paul corrects and challenges his audience’s understanding of Christ by insisting on the centrality of the lordship of Christ, through whose death and resurrection God accomplished his salvific plan. Paul labels everyone who adheres to religious practices not centered on Christ as captives to an “empty and deceitful philosophy according to human tradition … not according to Christ” (2:8).

Scot McKnight concurs with this grand theme. He says that Paul “took a firm position in his taxonomy of world religions.” He was well aware of “the smorgasbord of religions taking various poses in the Roman Empire.” He continues:

For Paul there was but one true Lord of the empire; his name was Jesus, and he was the Jewish Messiah. Everything in the letter before us, Colossians, flows from those claims about Jesus. Paul’s claims transcend what we in the Western world call religion. Politics, culture, cult, spirituality, power, ethnicity, and one’s moral-religious heritage all come into play for Paul, and at the top of the heap, ruling over all, is Jesus as Messiah and Lord. If Paul does not have a metanarrative, he certainly has a meganarrative, one that offers a wide-ranging explanation of all that has been, is, and will be – and why and how. The entire narrative boasts one central substance: Jesus of Nazareth is the Lord of all. That boast flowed from one and only one source: the resurrection of Jesus.

Or as R Kent Hughes has put it:

When we study Paul’s epistles we see that each has a dominant theme. In Romans, it is justification by faith. In Ephesians, it is the mystery of Christ and his Church. In Philippians, it is the joy which Christ brings. In Colossians, it is the absolute supremacy and sufficiency of Jesus Christ as the Head of all creation and of the Church. There is no book in the New Testament, including John’s Gospel, which presents such a comprehensive picture of the fullness of Christ.

This epistle also has an important Christological hymn, found in Col. 1:15-20. Says Marianne Meye Thompson about it, “Without doubt, this is one of the most memorable and influential passages in Colossians. It delineates the identity of Jesus Christ in relationship to God, creation, and the church, describing the way in which God’s purposes for the world and humankind are brought to fruition through Christ.”

David Garland speaks about the relevance of this epistle for believers in our own time:

The situation facing the Colossians is also similar to ours today. They faced opponents who challenged and belittled the sufficiency of Christ and their hope. Christians today live in a secular society, which regularly scoffs at Christian faith… When Christians do not understand their faith, they are likely to water down the gospel and accommodate it to cultural expectations… When Christians have little confidence in their faith, they will be overly tentative in their claims and easily shaken by challenges. Paul hoped to fortify the Colossians in their assurance of the hope they had in Christ.

One passage that has puzzled some believers is Col. 2:8 which says, “See to it that no one takes you captive through hollow and deceptive philosophy.” Does this verse mean we should have nothing to do with philosophy? See my discussion about this matter here: billmuehlenberg.com/2019/10/21/difficult-bible-passages-colossians-28/

That verse in part deals with one subtheme of the book, the certain false teaching – often referred to as the ‘Colossian heresy’. The exact nature of this error that Paul is dealing with is not fully certain, with various proposals as to what exactly it was. Most have argued for some form of Jewish Gnosticism. Whatever it was, the book of Colossians is in large measure devoted to refuting it by highlighting – as we already noted – the supremacy of Christ.

As F. F. Bruce puts it: “The teaching of the letter to the Colossians is concerned with those aspects of the gospel which were chiefly threatened by the Colossian heresy—the uniqueness of the person of Christ, in whom the plenitude of deity was embodied; the perfection of the redeeming and reconciling work which he accomplished by his death on the cross, and the spiritual liberty enjoyed by all who by faith were united to him.”

An outline of the per, as per the ESV Study Bible, goes like this:

As to my favourites, perhaps go with Beale, McKnight, Moo, Pao and Thompson.

You can see my review of Douglas Moo’s commentary on Colossians here:
billmuehlenberg.com/2009/02/09/a-review-of-the-letters-to-the-colossians-and-to-philemon-by-douglas-moo/