This should be of some help to you as you read and study the book of Philippians:

The short book of Philippians (only four chapters) is a key book in the New Testament. It is clear that Paul wrote this while imprisoned (1:7, 13, 14), but with numerous Pauline imprisonments, it is less clear which one. Was it at Ephesus or Rome for example? 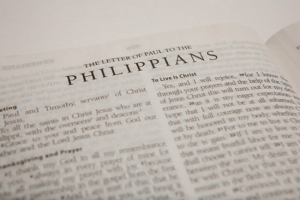 It seems most scholars hold to a Roman imprisonment, which would mean the letter was written around 60-62AD. Others however prefer Ephesus as the setting, which would mean it was likely penned in the mid-50s. But the critical commentaries listed below offer all the pros and cons of the various options.

By way of an introduction to the epistle, several commentators can be appealed to here. N. T. Wright says this about the book: “Paul’s letter to the Christians in Philippi is a small gem. Though it covers a good many well-known theological topics, including particularly Christology, soteriology, and eschatology, its chief and largely unremarked value for theological interpretation is the way in which it hammers out a Christian view of what it means to live within a pagan society.”

And in his New Testament Theology, I. Howard Marshall offers this summary of the book:

Like 2 Corinthians, Philippians shows the way in which Paul understood the circumstances theologically and in particular came to terms with the prospect of his death. A personal relationship of knowing Christ lies at the heart of Paul’s religion, although it is not presented as explicitly elsewhere as it is here. Christ is seen not merely as the Savior but also as the pattern for Christian living. The threat of Judaizing leads to a succinct statement of the need to put one’s confidence only in Christ for salvation and not in any human achievements; here the element of self-confidence involved in relying on the works of law comes especially into view. The Christian life must be conformed to Christ and his cross.

Many key themes and biblical truths can be mentioned concerning this book, but several can be discussed here. One thing that certainly stands out is joy. Despite Paul being imprisoned for two years, without trial, abandoned by many of his friends, attacked by others, he could still talk repeatedly about joy. The opening paragraph of Marcus Bockmuehl’s commentary offers a brilliant discussion of this theme:

St Paul’s letter to Philippi sparkles with joy—the sort of life-giving, heart-refreshing joy that is tangibly transforming in its effect on the mundane realities of everyday existence. Philippians is, at the same time, an epistle of joy tested and refined, written in Roman captivity while Paul awaits trial on a capital charge and is prevented from carrying out the remainder of his life’s work. It shows us Paul at his most mature, having weathered the storms of his earlier ministry: disputes with religious conservatives and ritualists in Antioch and Galatia, with moral relativists and extremists in Corinth, and with various unworldly forms of spirituality in places like Corinth and Thessalonica. Near the end of his hard and adventurous road, we find a man whose faith in Christ has not merely survived but aged with grace and wisdom, refined and true as gold.

Or as James Montgomery Boice put it:

The letter to the Philippians is one of the most joyous books in the Bible. All the way through the letter Paul speaks of inner joy, of inner happiness – sixteen times in four brief chapters. And he does it in such an artless way we know that the one who advised the Philippians to “rejoice in the Lord always” had himself found the true source of joy. He had not only learned in whatever state he was to be content; he had learned to rejoice in whatever state he was. He overflowed with rejoicing.

Other great aspects of the book can be highlighted, including the great Christological hymn of Phil. 2:5-11. Donald Hagner explains its deep theological importance: “The hymn is doctrinally significant in that it sets forth a three-stage Christology: preexistence, incarnation, exaltation. Jesus comes from heaven to earth, accomplishes his work, and then returns to heaven. It thus encapsulates the story of salvation and expresses the heart of the Pauline gospel.”

The great hymn is also subject to great debate, with “kenotic Christology” becoming a hotly contested matter. The Greek verb used in verse 7 has been the subject of great debate. Since I have written on this elsewhere, let me quote from that:

The first three verses say this:

In your relationships with one another, have the same mindset as Christ Jesus:
Who, being in very nature God,
did not consider equality with God something to be used to his own advantage;
rather, he made himself nothing
by taking the very nature of a servant,
being made in human likeness.

The crux of this passage is verse 7 and how we are to understand the bit about Jesus making himself nothing, or emptying himself, as other translations have rendered it. Oceans of ink have been spilled on this one, but we must seek to understand how the key Greek word, kenosis, is being used theologically here.

Of what did Christ empty himself? Did he stop being divine during the incarnation? Did he empty himself of his divine attributes? While theologians who are more liberal have developed full-blown kenosis theories, arguing such positions as this, most conservative scholars believe what is being said here is that Christ simply self-limited himself as he became a man in the Incarnation.

Thus he limited the use of some of the divine attributes that belonged to his divine nature, such as omnipotence and omniscience. As a real man he was dependent on and obedient to the Father. He was empowered by the Spirit in his earthly ministry, so in that sense he emptied himself. But he did not cease being God.

As a divine being he had perfect knowledge, but as a man he grew in strength and knowledge just like anyone else. In this respect he was subordinate to the Father. How these two natures in one person interact and cohere is of course the stuff of mystery. Biblical revelation only takes us so far in all this.

But this is the NT framework for understanding this passage. Let me appeal to a few commentators here to further elaborate on all this. As Michael Wilkins comments:

“While he did not in any sense give up his deity, Jesus voluntarily limited the use of those divine characteristics so that he could experience human life in its entirety (cf. Heb. 4:14-16). It was only at the will of his Father that he could use his divine attributes, if it was the Father’s will for him to do so. He acted primarily in his humanity and was empowered by the Spirit….

“The independent use of his supernatural knowledge was limited to whether it was the Father’s will for him to use it. In his earthly ministry Jesus came to do the will of his Father in heaven. It was not the Father’s will for him to know the date of his return during his time on earth. In his human consciousness, Jesus restricted himself to normal human knowledge while retaining omniscience in his divine nature. On other occasions he demonstrates supernatural knowledge of the present and the future (e.g., John 2:4; 4:17-18; 6:70; 11:4, 11; 13:10-11, 38).” billmuehlenberg.com/2017/02/21/difficult-bible-passages-matthew-2436/

Needless to say, this can become quite a detailed and nuanced debate, which deserves far more attention than what is offered here. All the major commentaries of course will spend a fair amount of time discussing the kenosis theory and how it is to be understood. As to further studies on this, these volumes are quite useful:

A brief outline of the book is as follows:

As to recommended reading, the commentaries featured here are mainly those of a more or less conservative and evangelical perspective.

As to my favourites, perhaps go with Bockmuehl, Fee, O’Brien and Thielman.