I want to mention two films I have seen on television recently. How much you relate to what I am going to say will depend on how old you are and your cultural literacy.

Both films brought back a lot of memories and emotion for me, because I lived through those times, and was very much a part of that scene.

The first was a documentary film about Joni Mitchell that was on last week. Some of you will remember her. In many ways she was the face of the counter culture of the 60s. She wrote the song Woodstock which Crosby Stills and Nash made popular. In it she spoke of the need to get back to the garden.

A reference to the unspoiled Eden. She like many others, was protesting the way society had developed, and she wanted to get back to this golden age.

A second film was on several months ago. It was the director’s cut of Woodstock, a 4 or 5 hour version of the 3 day rock festival in upstate New York in August 1969. All the heavyweights were there: Jimi Hendrix, Janis Joplin, Santana, The Who, Crosby Stills and Nash.

It was the high point of the hippy generation. It was billed as “Three days of peace and music”, with plenty of drugs and sex thrown in as well. It was meant to be the dawning of a new age.

But as Jesus said, when we try to build a house on sinking sand instead of the rock, the foundation will not hold. Four months later, at another rock concert, this time at Altamont California, the bubble burst.  The Jefferson Airplane, the Grateful Dead, the Rolling Stones were among the highlights. Unfortunately however, the Stones used for their bodyguards the Hells Angels. And even more unfortunately, they gave the bikers free beer as a payment. Hells Angels and cases of free beer is a bad combination. 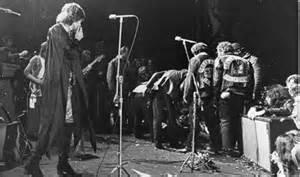 Before the eyes of thousands of young counter culture idealists, the bikers stabbed to death an over-zealous fan, and the demise of the counter culture began. Flower power was over. Paradise lost.

I mention these two episodes for several reasons. One, I was a part of those heady days. With my bare feet and hair nearly down to my waist, I was fully involved with the counter culture (until my conversion in 1971).

Also, it is remarkable what an impact was made by the counter culturalists. In the 60s they were a minority on the fringes of society. The conservative Christian mainstream was firmly in the center, with the hippies and radicals on the outsides.

But in three short decades a complete reversal of fortune had occurred. Today the radicals of the 60s and their values and worldview have become mainstream. And guess who are the new counter-culturalists on the margins of society? You and me. We are the new minority fringe, pushed to the outer boundaries of our culture.

The question to ask is how could the radicals of the 60s so quickly and thoroughly displace the Christian mainstream and take their place? That story cannot here be told.

But the real question is, what will we do, as the new counter-culture? Can we regain lost territory? Can we make a difference and be as successful as the 60s radicals were? Are we as committed to our cause as they were to theirs?

Of course if you think faith is a private matter, only affecting Sunday mornings and what you do on your knees at home, then there is no sense of urgency in all of this.

But if you believe that every square inch of society should be brought under Christ’s lordship, that every area of life should be declared His, then we should be doing all we can to promote faith and family values in the public arena.

The way to do this is to keep on keeping on with the ministries and callings God has given you. But these need to be done with the right motivation. The primary reason we serve him is because he deserves it. He gave his all for us, and we can do no less for him.

In closing, a story about Mother Teresa comes to mind. Her work with lepers and other outcasts in the slums of Calcutta is a testimony to how one life can make a difference.

One day a British tourist came to inspect her work. He told Mother Teresa, “I would not do what you are doing for a million pounds”. She looked him in the eye and said, “Neither would I”.

She was not in it for the money. Nor the fame. Nor for personal glory or an ego trip. She was there for one reason only. She had a vision of a man who gave his life for her 2,000 years ago. That sacrifice was so remarkable, so eventful, that all she could do was to follow the example of a suffering servant, and give her life for others.

Can I encourage you to continue in your work. And continue to do it for the right reasons. Out of a deep gratitude for what Christ has done for you. That is the only motivation for service that really matters. And that is the only way that we can really get ourselves back to the garden.

3 Replies to “A Tale of Two Cultures”