Sixty-five years ago the world celebrated Victory in Europe Day. On May 8, 1945, the official surrender of Germany was accepted by the Allies, and war in Europe was over. (It would take another three months before Japan finally surrendered.) Thus ended a six-year war which cost around 60 million deaths.

May 8, 1945 witnessed dancing in the streets in numerous European cities, and celebrations around the world. It marked the end of the world’s most bloody conflict, and put a stop to Hitler’s nefarious plans. In many ways V-E Day had begun a year earlier, when D-Day was launched in June 6, 1944. This was the beginning of the end of Hitler’s murderous regime as the Allies sought to retake land held by the Nazis.

The rapturous celebration which took place 65 years ago offers a powerful image of what will occur at the end of this present evil age. The Christian take on human history is that this long period of enemy occupation will not go on forever, but one day Satan will be routed and King Jesus will again take his rightful place on planet earth. This will be the real V-E Day: Victory on Earth Day. 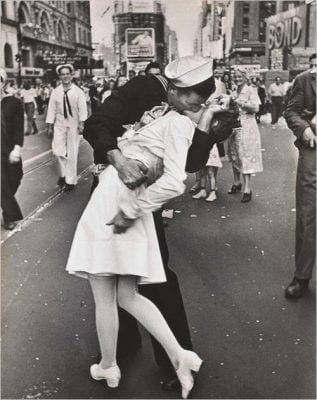 If the second coming of Christ to earth to finally and fully defeat the works of darkness can be likened to V-E day 1945, then his first coming and his work at Calvary can be likened to D-Day, 1944. When Jesus came the first time he assured the world that the works of the enemy were being undone, and one day his ugly influence would be no more. It was the beginning of the end of the dark kingdom as Jesus offered his life a sacrifice for our sins 2,000 years ago.

And just as the Allied soldiers were retaking lost territory and reclaiming land from the enemy between the two famous Days, so too believers are repossessing the land between these two advents. Jesus had the victory at Calvary, but we are his foot soldiers performing the mopping up operations. We are his soldiers, reclaiming territory taken by the enemy.

There are many important theological truths contained in all this powerful imagery. It was Oscar Cullmann in his book Christ and Time (1950) that first made this now famous analogy from World War II. He sought to present a picture of biblical eschatology that made sense of the two advents of Christ. He argued that the cross and resurrection are to D-Day what the end of history is to VE-Day.

Theologians speak about the “already, and not yet”. Already the new age has dawned, because of Christ’s first coming, but the new age is not yet complete. We await the second coming before we see all things put under His feet. Victory is assured because of Calvary, but final triumph will not come until Christ’s Parousia.

This helps to explain a lot of mysteries in the Christian life. If Jesus had the victory 2,000 years ago, why don’t we always see victory now in this life? Why is there still sin, sickness, suffering and death? The concept of “living between the ages” explains much of this.

Many New Testament scholars and commentators have spoken to this theme. N.T Wright for example puts it this way: “The early church held on firmly to both sides of the apparent paradox: the end had happened; the end was yet to come. Paul writes from prison about his present suffering at the hands of persecutors and also about the triumphant victory that Jesus won on the cross over the principalities and powers. This is utterly characteristic. Both sides must be given the same stress.”

J.I. Packer, writing in relation to the “wretched man” of Romans 7, expresses it this way: “All the thinking of the New Testament writers, Paul’s as much as any, moves within the frame of ‘inaugurated eschatology’ – that is, it involves recognition that through the Spirit Christians enjoy the firstfruits, foretaste, initial installment, and dawning enjoyment of the life of the new aeon, the kingdom era of redeemed existence, while the old aeon, the era of existence spoiled by sin, continues, and the fullness of the new aeon remains future. The two ages overlap, and Christians are anchored in both, so that language proper to both is appropriate, indeed necessary, for describing their condition theologically.”

This understanding of the “already, and not yet” helps us guard against two unbiblical extremes: undue despair (pessimism) and undue optimism (triumphalism). There certainly is victory in Christ, so we can see real success and triumph. But we still live in a fallen world, awaiting the final consummation of all things, so we will also see setbacks, disappointments and losses.

John Stott puts it this way: “Many Christians choose one or other of these positions, or oscillate unsteadily between them. Some are triumphalists, who see only the decisive victory of Jesus Christ and overlook the apostolic warnings against the powers of darkness. Others are defeatists, who see only the fearsome malice of the devil and overlook the victory over him which Christ has already won. The tension is part of the Christian dilemma between the ‘already’ and the ‘not yet’. . . . An overemphasis on the ‘already’ leads to triumphalism, the claim of perfection – either moral (sinlessness) or physical (complete health) – which belongs only to the consummated kingdom, the ‘not yet’. An overemphasis on the ‘not yet’ leads to defeatism, an acquiescence in continuing evil which is incompatible with the ‘already’ of Christ’s.”

Consider a practical issue in this regard – divine healing. Why is it that some people get healed and some don’t? Why is healing, like everything else, only partial, incomplete and temporary? Lazarus, who was raised from the dead, presumably died again. We all grow old and we all die. Was this not meant to be dealt with at Calvary?

The “living between the ages” framework helps us to make sense of all this and get some balance. Yes death was conquered at the cross, but as long as we live between the ages, we will still be subject to physical death. So too, we will have our share of suffering, sickness and adversity.

As Ken Blue explains, “The ministry of healing, like all other aspects of Christian ministry and experience, is partial, provisional and ambiguous. . . . We see the now-and-not-yet nature of the kingdom not just through our ministries but also in our personal experience of salvation. . . . Freedom from sin and sickness is eschatological – that is, it comes finally and fully only with the eschaton, the end of time that comes with the return of Jesus Christ. Full freedom will only come with our resurrection.”

Of course to say all of this is not to deny that God wants to act mightily on behalf of his people. All of this is not to deny the miraculous nor to deny the Spirit’s empowerment in believer’s lives. If over-emphasising the ‘now’ is a danger of the health and wealth gospel, over-emphasising the ‘not yet’ is a danger of much non-charismatic Christianity. Too much powerless Christianity seems to be the norm today. Thus we owe the health and wealth gospellers some credit for a revitalised interest in faith and the Spirit’s work in our lives. A balance, in other words, is what is needed. Thus we need to avoid both an under-realised and an over-realised eschatology.

As Gordon Fee puts it, on the one side, there is “a strong tendency to leave God’s people to ‘slug it out in the trenches’ more or less on their own, with some lip service paid to the Spirit but with little of the Pauline experience of the Spirit as the empowering presence of God. On the other side lie some equally strong tendencies toward triumphalism, especially in a culture like late-twentieth America, where pain of any kind is rejected as a form of evil and where suffering is to be avoided at all costs. . . . The result on this side is something of an ‘over-realized’ eschatological perspective, with an unPauline view of the Spirit as present in power which negates weakness in the present as something dishonoring to God.”

One day Victory on Earth will happen when Christ returns. All true followers of Jesus eagerly await that day and look forward to the final consummation of all things, as the enemy is finally put down and Jesus takes up his rightful rule on planet earth. There will be plenty of dancing on the streets when that occurs.

But in the meantime a war is still waging, and we are all called to do our part – as Christ’s foot soldiers – to reclaim enemy territory for Christ and His Kingdom. We are all in a war, and there is no time for sitting on the fence or opting out of the battle. We will get wounded along the way, and have many scars. Many casualties will occur.

But Calvary is our guarantee of the final victory. The first coming of Christ was D-Day for planet earth. Perhaps soon, it will be V-E Day. Let us continue to fight while the battle is raging. Too much is at stake to seek to stay on the sidelines. We fight with the certain knowledge that victory is assured, and one day there will be genuine peace in our time.