This passage of Scripture is not so much difficult to understand as it is prone to being misunderstood. It is regularly abused and misused, usually by the left – both religious and secular. It has often been used to justify communism, socialism, statism, redistributionism, and the welfare state. The truth is, it can justify none of these.

The passage of course is the famous story of how the early disciples helped out in an emergency situation, in which the voluntary pooling of resources took place to help out the poor in Jerusalem. In this there is the memorable incident of the death of Ananias and Sapphira.

Leftists want to use this passage of Scripture to prove that socialism of some sort was practiced in the early church, and that it must be our model for Christian economic policy. They are wrong on both counts. This practice had nothing to do with more recent forms of communism or socialism. 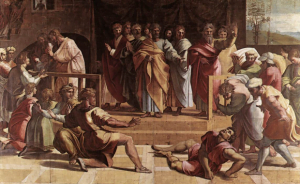 And this was not a mandatory policy or something commanded of all believers for all times. In short, it was a temporary and voluntary reaction to a crisis, and it was nowhere commanded of Christians, and nowhere held up as some sort of biblical paradigm of economic practice.

Getting a grasp of the historical context is crucial here. We know that many Jews travelled to Jerusalem to celebrate the Feast of Pentecost each year. So the city was swollen with visitors. But this was no ordinary Pentecost, with many Jews becoming believers, and staying on for instruction in the faith.

These new believers had to be looked after and tended to. Also, we know that there was a common practice of the early Christians helping each other out during difficult times. Paul in 2 Cor. 8-9 for example speaks about how during times of financial difficulties, other more wealthy congregations should help out their poorer brethren.

And we read about similar practices occurring in Acts 2:44-45. But these verses also speak about the voluntary nature of the generosity, dealing with a particular situation that needed to be addressed. As Ben Witherington says of this passage:

“Taken together, vv. 44-45 do not at all suggest what we would call communism or some sort of system where there was no such thing as private property. Rather, what is described here is that no one was claiming any exclusive right to whatever property he or she had, and when need arose the early Christians readily liquidated what assets they had to take care of fellow believer’s needs.”

That this was no compulsory, all–inclusive socialism wherein all private property was confiscated is seen in the rest of the book of Acts. We still find the early disciples owning their own homes. Indeed, we find just after this text these words: “They broke bread in their homes and ate together” (Acts 2:46). Obviously not all homes were sold.

And in Acts 12:12 we find another counter-example. There we read that Mary the mother of John owned her own home, complete with a servant girl. Peter was there, and he did not chew her out for being an evil capitalist pig!

Once again Witherington, whose commentary examines in detail the social and economic background to the book, warns against a misleading reading of what we find in Acts 4: “Nothing is said here about a transfer of ownership of property or any requirement to surrender it, unlike the case at Qumran; the discussion is about the liquidation of some assets.”

He continues, “Nor is there any evidence of control of ownership of all property by the community; rather, there is control and distribution of the funds given to the community. Notice that Luke calls those who give in this text ‘owners,’ which comports with what he will say in Acts 5. The overall impression left by both this summary and the following examples of Barnabas as well as Ananias and Sapphira is that the giving was voluntary, not required.”

As John Stott reminds us, “neither Jesus nor the apostles forbade private property to all Christians. Even the sixteenth-century Anabaptists in the so-called ‘radical reformation’ … who talked much about Acts 2 and 4 and ‘the community of goods’, recognized that this was not compulsory.”

Consider also the death of Ananias and Sapphira (5:1-11). Were they killed because they refused to take part in a communistic economic scheme? Not at all. The text makes it quite clear that they were struck dead by God for lying. In Acts 5:3-4 this is clearly laid out:

“Then Peter said, ‘Ananias, how is it that Satan has so filled your heart that you have lied to the Holy Spirit and have kept for yourself some of the money you received for the land? Didn’t it belong to you before it was sold? And after it was sold, wasn’t the money at your disposal? What made you think of doing such a thing? You have not lied to men but to God’.”

So we again find nothing here to indicate believers must embrace some modern form of socialism. Modern communistic systems denounce all private property as evil, insist on the State-enforced confiscation and distribution of wealth; and do this as a matter of course, not just to deal with emergency situations.

Thus the passage in question lends no support whatsoever for modern ideologies of socialism and redistributionism. John Stott is again right on the money when he says we should not find laid down here “an obligatory model – a kind of primitive Christian ‘communism’ – which God wants all Spirit-filled communities to copy. The fact that the selling and giving were voluntary is enough to dispose of this.”

So what does this passage tell us? “What we should surely do, instead, is to note and seek to imitate the care of the needy and the sacrificial generosity which the Holy Spirit created.” That Christians should be compassionate and generous with their wealth and resources goes without saying.

But to seek to argue that such Christian compassion means we must embrace an enforced collectivism, as in the modern socialist state, is another matter altogether. What may be the most appropriate economic model for Christians to latch on to is a complex and layered debate.

I have tried to deal with that debate elsewhere. Suffice it to say that if you are looking for a biblical warrant for communism, you will not find it by looking at the Book of Acts.