Charles Haddon Spurgeon (1834 – 1892) was one of England’s greatest preachers. Indeed, he was known as the “Prince of Preachers” and is said to have preached to some 20 million people. He died relatively young, but began his preaching career at 16.

His conversion story is just one of many fascinating aspects of his life. On Sunday January 6, 1850, John Egglen of Colchester awoke to a town buried in snow. Why bother going to church, he thought. But being the good deacon that he was, he walked the 6 miles to the Methodist church. Even the pastor couldn’t make it that snowy morning. Indeed, only 13 people showed up: 12 members and one visitor, a 13-year-old boy. 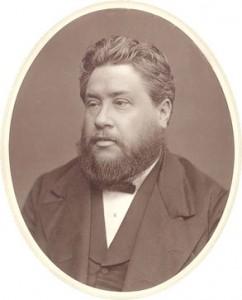 Some suggested going home. But Egglen refused – after all, they did have a visitor. But who would preach? Egglen was the man, even though he never preached before. And it showed – his sermon was only ten minutes long and was far from elegant. The text was Isaiah 45:22: “Look unto me, and be ye saved, all the ends of the earth.” Gathering a bit of courage, Egglen looked straight at the visitor and said, “Young man, look to Jesus. Look. Look. Look.” The boy did look, and was instantly and gloriously saved.

It’s a good thing Egglen didn’t stay in bed that day. That young boy was Charles Spurgeon. When he told his mother he wanted to be baptised, she replied, “Ah, Charles, I often prayed the Lord to make you a Christian, but I never asked that you might become a Baptist.”

As a youngster he loved to read, especially his father’s theological books. He said he “fetched those old authors . . . and never was I happier than when in their company”. His brother James said, “Charles never did anything else but study. I kept rabbits, chickens, and pigs and a horse; he kept to books”.

His hobby was scouting out and buying second-hand books. Theology of all sorts, and commentaries on the Bible, were especially prized. Ah, a man after my own heart! He left a library of over 12,000 volumes when he died.

He preached his first sermon in 1850. He seemed to be a natural born preacher, and that won him acclaim as well as critics. He feared that pride would derail his ministry, so he was early on impressed with the verse, “Seekest thou great things for thyself? Seek them not!”

When asked to speak at other churches, he told them he would come only if they would pray for him. When asked for the secret of his success, he answered, “My people pray for me”. In 1854 he went to New Park Street Chapel in London, called to preach the gospel. It was there that he met and later married Susannah Thompson.

He preached twice a Sunday, and had his sermons printed and distributed around the world. His sermons were usually 45 minutes long. His church services had no organ, choir or entertainment. Although he regarded himself as a Calvinist, he was a real evangelist. He prayed: “Lord, hasten to bring in all thy elect, and then elect some more.” This put him in strife with hyper-Calvinists.

When the Tabernacle needed restoration work in 1867, he used the Agricultural Hall. At each of the services some 20,000 attended. The largest gathering of his career was a service held in the Crystal Palace in London on October 7, 1857. There were 23,654 people present.

He had a strong belief in the importance of theology and doctrine, and training ministers, so he started a ministerial training school. By 1866 his men had formed 18 new churches. One man went to a church that had been reduced to 18 people. Within a few years he had baptised some 800 people.

He frequently arranged to have a group of members leave the Tabernacle to start a new church. Daughter churches were planted around London, and his impact had by now become global. Starting in 1870 Spurgeon began, every three months, to ask all members to remain away from the evening service on the following Sunday, since by filling the Tabernacle they were preventing the unconverted from getting in and from hearing the gospel!

Imagine telling your congregation to stay home, because there are too many of them, and the non-Christians can’t get in! Would that we had such a problem! By 1875 the Tabernacle had a membership of 5000, making it the largest Baptist church in the world.

In 1865 he launched the monthly magazine, The Sword and the Trowel. Each issue carried news and facts on the state of the church, devotional writings, theology, and book reviews.

He preached both in his own church and in many others. He often preached ten times a week. It is said that from his pulpit at the Tabernacle he proclaimed the gospel to at least twenty million people. Even when he went on vacation he continued to preach. During a summer vacation in Scotland he often preached to 10,000 and 15,000 in the open air on a Scottish hillside.

He also wrote around 500 letters every week (although he had secretarial help), responding to correspondence he received from almost every country on earth. He produced more than 140 separate books, including his famous Lectures To My Students, and his 7-volume commentary on the Psalms, The Treasury of David.

He also oversaw all of the many activities of the ministry: the ministerial training college, an orphanage, almshouses, various charitable works, help for the poor, etc. He literally worked himself to death.

Indeed, he suffered a number of physical ailments throughout his life, and often had to deal with bouts of depression. His wife was also often bed-ridden and incapacitated. Despite all his many sufferings, he never tired in his zeal for the work of the Lord.

I conclude with just a handful of memorable quotes from Spurgeon. There would be hundreds of these, if not thousands. But these will give you an inkling of what this man of God was all about:

“Too many think lightly of sin, and therefore think lightly of the Saviour.”
“I cannot be happy unless I am doing something for God.”
“Holiness is not the way to Christ; Christ is the way to holiness.”
“There can be no such thing as perfect happiness till there is perfect holiness.”
“I have endeavored to speak as a dying individual to dying individuals.”
“Little faith will bring your souls to heaven, but great faith will bring heaven to your souls.”
“You are the salt not the sugar candy; something the world will spit out not swallow.”
“If you really long to save men’s souls, you must tell them a great deal of disagreeable truth.”
“Long ago I ceased to count heads. Truth is usually in the minority in this evil world.”
“I wish that saints would cling to Christ half as earnestly as sinners cling to the devil. If we were as willing to suffer for God as some are willing to suffer for their lusts, what perseverance and zeal would be seen on all sides!”
“If the man does not live differently from what he did before, both at home and abroad, his repentance needs to be repented of, and his conversion is a fiction.”

There are many biographies of Spurgeon available. Here are just a few.