Gilbert Keith Chesterton (1874-1936) is one of my favourite writers, and his 1908 volume Orthodoxy is one of my favourite books. He was an English writer, apologist, poet, essayist, and journalist. He was extremely prolific, having penned some 80 books, 400 essays, and many short stories, poems and plays. (I am obviously not a true Chesterton fan, as I only have around 30 of his books!)

He is as noted for his fiction as his non-fiction. Many have grown to love his detective fiction, via his Father Brown series. These short stories are available in various forms, including a five-volume set. His writing style (full of humour and the use of paradox), his sharp mind, and his acerbic wit all combine to make for memorable reading. He is simply a joy to read. Indeed, just writing this article about him and his work brings me joy. 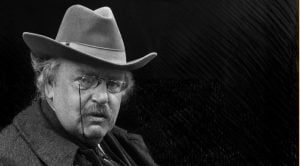 He was a journalist and columnist early on, and many of his regular columns he continued writing for decades. After a somewhat wild and irreligious youth, he moved into Anglicanism, following his 1901 marriage to Frances Blogg whom he stayed married to till his death. But he converted to Roman Catholicism in 1922 and became a staunch defender of it for the rest of his life.

He was certainly a character: quite tall and heavy set, wearing a cape and crumpled hat, carrying a walking stick, with a cigar in his mouth and even a revolver in his pocket. His was a formidable physical presence, but he has left us a formidable literary presence.

He was eccentric and feisty, jolly and insightful. A sort of absent-minded professor, there are plenty of amusing anecdotes concerning him. In one famous case he wired his wife, asking, “Am at Market Harborough. Where ought I to be?” to which his wife replied, “Home”.

Many other famous stories of him abound. One ripper is when The Times invited him and some other eminent authors to write an essay on “What’s Wrong with the World?” Chesterton’s reply came in the form of a letter: “Dear Sirs, I am. Sincerely yours, G. K. Chesterton”.

His interests ranged quite far, with philosophy, history, poetry, journalism, literary criticism, politics, and Christian apologetics, all part of his repertoire. As mentioned, he became a Catholic late in life, and wrote The Catholic Church and Conversion in 1926, and The Thing: Why I am a Catholic in 1929.

While Protestants may not like everything he writes about Christianity, most of his enduring works of Christian apologetics are volumes which any Protestant can more or less warmly support and enjoy. To the extent that he was basically defending Nicene Christianity, his works are of universal Christian appeal.

His other writings are also of great value. For example, his works on literary figures such as Charles Dickens, Robert Browning and William Blake received widespread acclaim. He also helped to found the London Detection Club, a group which included such heavyweights as Agatha Christie, Dorothy Sayers, and Ronald Knox.

He took on the best minds of his day as he defended Christian orthodoxy. Thus he was quite unafraid to lock horns with H.G. Wells, George Bernard Shaw, Clarence Darrow and Bertrand Russell. His debating and writing skills were legendary, and he never shied away from a fight.

His Christian writings especially had a profound impact on a whole generation – and more – of other great minds. People like C.S. Lewis, J.R.R. Tolkien and T.S. Eliot, to name just a few, were all greatly influenced by him. Plenty of accolades can be produced concerning his work.

Let me mention just one, referring to one of his great masterpieces, Orthodoxy. Popular Christian writer Philip Yancey said this: “I would say Orthodoxy had as much influence on my spiritual direction as any single book, and it’s one of the few books that I go back and reread.”

Indeed, given what a marvellous work this is, let me conclude with a few snippets from this amazing volume.

As I mentioned, perhaps my all-time favourite book is Orthodoxy. I actually have purchased three copies of this incredible book over the years:
-On January 11, 1977 in Chicago I bought my first copy: a thin 1959 paperback edition. It is now well-worn and has been underlined mercilessly;
-On July 25, 1990 I picked up a rare 1909 hardback edition in a Melbourne second-hand bookshop, which no longer exists (the bookshop that is); and,
-On New Year’s Eve 2010 I bought my most recent copy (a 2006 hardback edition) so that I might have the joy of reading it afresh without all the old underlining. Of course it too is now hopelessly scribbled over in yellow highlighter.

There are not too many authors of whom I would have three copies of the same book. C.S. Lewis and J.R.R. Tolkien would be the only other authors that come to mind in this regard. But this book is one of those wonderful books that one never tires of.

For Chesterton, orthodoxy is simply the creedal affirmations found in the Apostles Creed which all Christians can adhere to. He wrote the book as a follow-up to his 1905 volume Heretics in which he critiqued various trendy isms of the day, including relativism, materialism and socialism.

In this book he recounts how he came to faith, and how the events of his childhood were such an important part of this. Perhaps my favourite chapter in the book is “The Ethics of Elfland”. In it he describes how all the things which delighted and amazed him in childhood were all to be later found by him in the Christian faith.

“These tales say that apples were golden only to refresh the forgotten moment when we found that they were green. They make rivers run with wine only to make us remember, for one wild moment, that they run with water.”

Life is seen as an adventure for the child, but it becomes a bore and a chore for adults. But real life is an adventure. Secularists simply cannot see this. They see repetition in nature, for example, as proof that everything is mechanical and lifeless. But just the opposite is the case:

“All the towering materialism which dominates the modern mind rests ultimately upon one assumption; a false assumption. It is supposed that if a thing goes on repeating itself it is probably dead; a piece of clockwork….

“A child kicks his legs rhythmically through excess, not absence, of life. Because children have abounding vitality, because they are in spirit fierce and free, therefore they want things repeated and unchanged. They always say, ‘Do it again’; and the grown-up person does it again until he is nearly dead. For grown-up people are not strong enough to exult in monotony. But perhaps God is strong enough to exult in monotony. It is possible that God says every morning, ‘Do it again’ to the sun; and every evening, ‘Do it again’ to the moon. It may not be automatic necessity that makes all daisies alike; it may be that God makes every daisy separately, but has never got tired of making them. It may be that He has the eternal appetite of infancy; for we have sinned and grown old, and our Father is younger than we. The repetition in Nature may not be a mere recurrence; it may be a theatrical encore.”

One final quote. He speaks of life as being “not only a pleasure but a kind of eccentric privilege”. He refers to the book Robinson Crusoe. He says “the best thing in the book is simply the list of things saved from the wreck. The greatest of poems is an inventory. Every kitchen tool becomes ideal because Crusoe might have dropped it in the sea. It is a good exercise, in empty or ugly hours of the day, to look at anything, the coal-scuttle or the book-case, and think how happy one could be to have brought it out of the sinking ship on to the solitary island. But it is a better exercise still to remember how all things have had this hair-breadth escape: everything has been saved from a wreck. Every man has had one horrible adventure: as a hidden untimely birth he had not been, as infants that never see the light. Men spoke much in my boyhood of restricted or ruined men of genius: and it was common to say that many a man was a Great Might-Have-Been. To me it is a more solid and startling fact that any man in the street is a Great Might-Not-Have-Been.”

This book, like all his writings, is full of wonder, mirth, wit, wisdom, insight and joy. Because of this his material is a goldmine for quotable quotes. Chesterton loved life because he loved the author of life. He abandoned his earlier cold and heartless unbelief, exchanging it for the full-coloured, joy-filled wonder of life in God.

If you have not yet read Chesterton, by all means get to it. Starting with Orthodoxy will not disappoint. He will open your eyes and lead you into a whole new world of appreciation, amazement, wonder and life-affirming faith. C. S. Lewis once said that the fiction of George MacDonald ‘baptized his imagination’. The same can certainly be said of Chesterton’s writings.

And if you are really a fan – or fanatic – you can obtain from Ignatius Press the 35-volume set, The Collected Works of G.K. Chesterton.